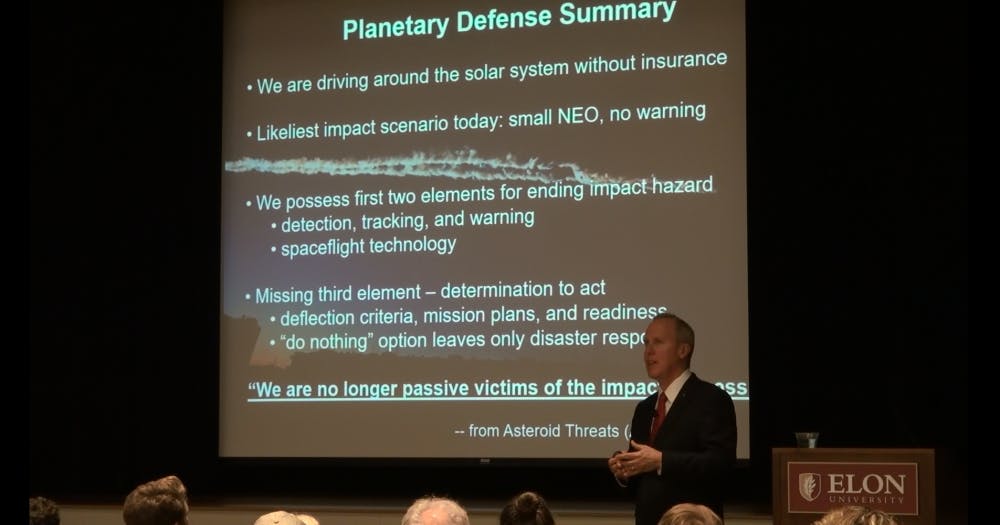 Within the next two decades, he hopes NASA will develop new Asteroid Impact Avoidance strategies to protect our planet.

Hundreds of students crowded in McKinnon Hall to watch former United States astronaut Tom D. Jones present on the catastrophic nature of asteroids during the Voices of Discovery presentation Monday night. The premise of his main argument was that our society can do more to protect our civilization from Near-Earth Objects, or anything that has an orbit coinciding near our planet, and he spent most of his time discussing the complications with reaching the current funding goals for research towards sufficient planetary defense mechanisms.

He discussed the threat NEOs pose to Earth's ecosystem and human society, the current technologies we use to predict and prevent such catastrophes and our current plans to improve these technologies. He also talked about potential economic opportunities that space mining could bring to the world.

Our biggest problem with improving our planetary defense systems, he said, is that we "lack the determination to act" and need to develop "the criteria for when we need to act and when you pull the trigger" with using them.

Jones presented a list of relative "impact points" researched in 2015 that showed a line of predicted areas where one asteroid has the potential to strike and our lack of resources to defend ourselves from it. He also superimposed the blast site from the Tunguska Event, an asteroid which impacted a rural area in 1908, onto New York City, demonstrating that the destructive nature would level the city in seconds.

"It's just a matter of luck that this didn't land on an urban area."

Jones explained how it is in the best interests of the world governments to protect our civilization from the unlikely occurrence of another mass extinction caused by these NEOs. He displayed a picture of a book that he and his team of space cadets sent to the UN in 2008, which proposed a plan to create a revolutionary new system of Asteroid Laser Ablation, used to redirect the path of asteroids predicted to impact Earth, and the NASA NEOCam, a space telescope used to survey Earth's surrounding NEOs.

"We have the know-how – we just need to possess the will," he said.

During the Q&A section of the presentation, one person asked, "If one of those big rocks would destroy a whole city, what's the likelihood it could trigger a nuclear war, if they mistook it as a ballistic warhead?"

To this, Jones affirmed it to be a real threat and that a few decades ago a "large fireball" over Pakistan was misinterpreted as a nuclear attack. He said the Cold War would've been a bad time for an asteroid to fall across the sky too, both in terms of the political climate and our ability to detect asteroids, but nowadays the technology is effective enough to be able to distinguish an asteroid from a threat to national security well in advance.

After the presentation, Jones met with students for a book-signing for his newest book, "Ask an Astronaut: A Galaxy of Astonishing Answers to Your Questions on Spaceflight", which was released in March of this year.

According to his website, Tom Jones is a traveling astronaut speaker who spent 11 years as a trained astronaut before retiring in 2001. Since then, he's dedicated his life to spreading awareness on important space topics.

For more information about him, including where to find his books, visit his website: http://astronauttomjones.com/