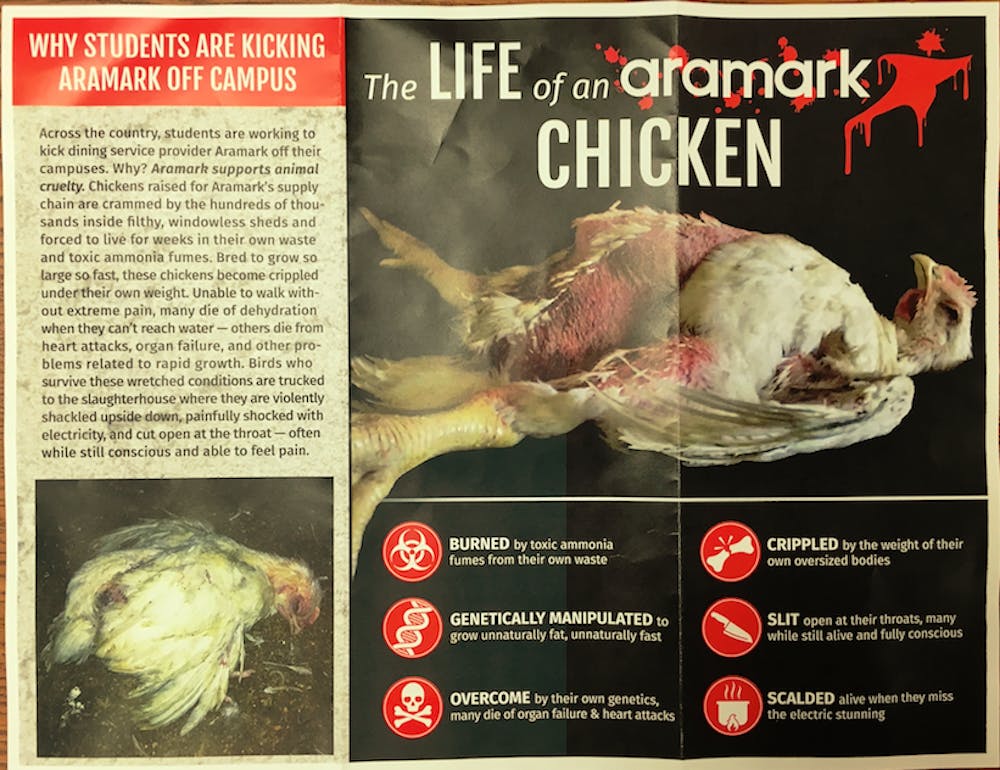 The pamphlet Elon Senior, Marissa Costner, and The Humane League member, Maddie Segal, were handing out to students that attached the attention of Aramark.

Elon University senior Marissa Costner is the face of the nationwide campaign for food provider Aramark to change some of its policies.

Costner has been working alongside The Humane League, a nonprofit organization that aims to protect  farm animals, to invoke a change in Aramark's treatment of animals. A petition was started that has garnered more than 90,000 signatures. Costner plans on hand-delivering the signed petition to Aramark's headquarters next month.

"I'm involved in this because I'm passionate about this issue, and it affects me as a consumer who doesn't want to fund this," Costner said.

Costner and The Humane League have been unsuccessful in getting a response from Aramark but after Elon News Network posted an article about their petition, we received a direct response from Karen Cutler, the media contact for Aramark.

"This is a false, misleading campaign being driven by The Humane League," Cutler wrote. "The sole reason for the campaign is that we are working with respected groups like the Humane Society of the [United States] and Compassion in World Farming, and not them."

Costner responded to this saying The Humane League is not upset that Aramark is partners with other nonprofits — they just want to see the change.

"If they're talking about making these changes with other organizations, that's awesome," Costner said. "[Aramark] should release a statement to say what they plan to do when they plan to implement it."

According to the statement, Aramark said they are working Tyson Foods, who provides them with their chickens, "to ensure they will make the needed improvements for the humane treatment of the chickens they raise."

Aramark said this is a priority and they, "will remain vigilant until Tyson and the poultry industry can make the changes needed."

Costner said The Humane League is asking for Aramark to make three changes: to improve the living condition of chickens, improve the health of the chickens and develop a new and more humane way for slaughter.

"Those changes will make a huge difference for these animals," Costner said. "In terms of Aramark being one of the biggest food service providers in the world ... It's not going to cost them a whole lot of money. They would probably gain a lot of public support."

Aramark said the raising of chickens is a problem worldwide.

"Just 1 to 2 percent of all the broiler chickens grown in the [United States] are raised in a manner that meets the new farming conditions," Cutler said. "We are currently figuring out how Aramark's large purchasing volumes can be met and developing a realistic timeline for large-scale implementation."

Aramark said they will share their plan as soon as it is finalized.

This story will continue to be updated.