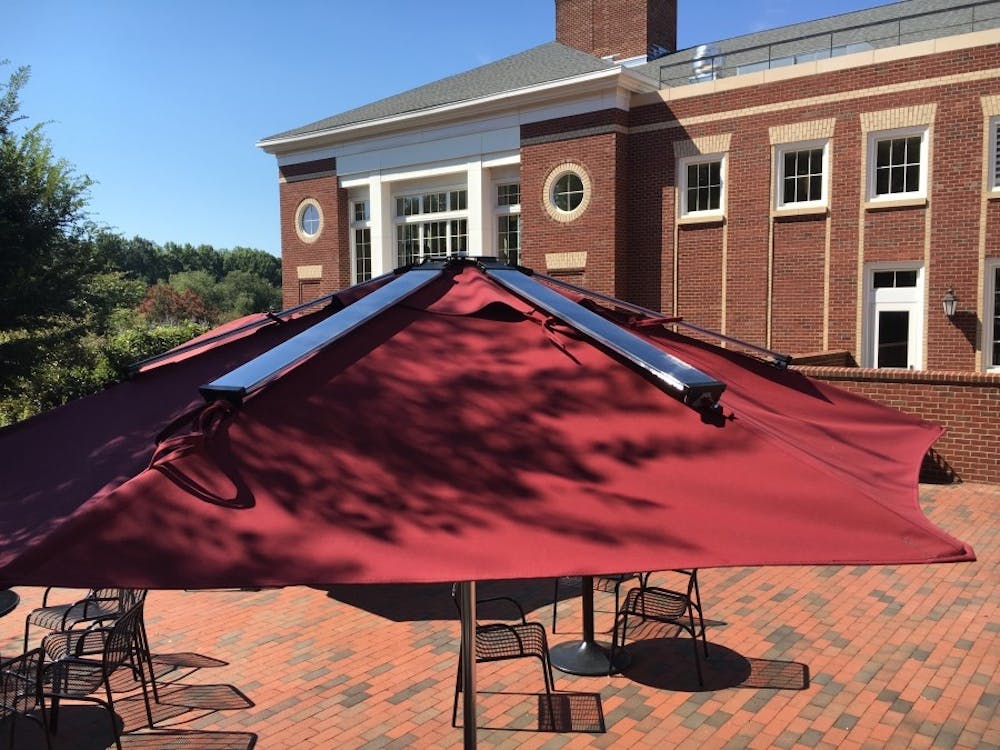 A group of transfer students sitting on the Moseley Center patio looked over to the table next to them and said, almost in unison, "What? That's so cool!"

The umbrella on that table had just been pointed out to them — the solar-powered, USB-charging umbrella.

The charging station umbrellas, called Powersols, were created by Sarah Jordan Akin, founder of ZON Technology. According to the ZON Technology website, the Powersol umbrellas capture solar energy through the monocrystalline panels placed on top of the umbrella.

That energy is then transformed by the umbrella into electricity, stored in a dual-cell lithium polymer ion battery, which can be used to charge any device plugged into the three USB charging ports. According to the ZON Technology website, the Powersol umbrellas can charge a phone or other USB device at the same rate as a wall outlet. Students just have to supply the charging cable, and the sun and umbrella do the rest of the work.

The idea to install the solar-powered charging umbrellas at Elon University came out of a national conference for the Association from Physical Plant Administrators. Associate Vice President for Facilities Management and Director of Physical Plant Robert Buchholz attended the conference and brought the idea back to Elon.

"This is a test," Buchholz said in an email. "We bought six, three at Moseley and three at Danieley Commons."

Since their installation in April 2016, one umbrella at Moseley has been damaged by the wind, Buchholz said. So that leaves five on campus now.

"We will see how much use they receive and how they stand up [before ordering more]," he said.

Freshman Will Van Burkleo, who was sitting at the table on the patio, said the umbrellas are really exciting. He plans to get a lot of use out of them, especially if some are placed in between academic buildings.

"I have a tendency to run out of battery on my phone a lot, so [putting them] on the tables on between academic buildings would be great."

Sophomore Will Bouhuys, also at the table, agreed, but thinks putting umbrellas in more places like Moseley and Danieley Commons would be most useful.

"I also think it'd be cool, like this one, to be near places where you could get food and get a drink and relax for a while, just have it there when you're going to be sitting down and chilling for a little while," he said.

Even though the umbrellas have been in place since April, many students still don't know about them. Buchholz even said he was "surprised" to not see news of the umbrellas spread on social media.

But aside from the solar panels and the small silver cylinders on the tables, the special umbrellas are hard to distinguish from the umbrellas that have been a staple of Moseley patio furniture for years. There isn't any signage to signify to student that some umbrellas can charge their phones.

Senior Jordan Solomon said she "had no idea" the umbrellas were there. She doesn't spend a lot of time around the two areas where the umbrellas are now, but she said she would use them if the university installed them elsewhere.

"[I would use them] over by Tangent and The Root," Solomon said. "Especially when there's a wait at The Root."

As far as the technology itself, Solomon and Bouhuys said they weren't worried about convenience or safety. Students can check the amount of solar energy stored by an umbrella at any time by looking at a series of LED lights on the base of the umbrella, similar to the row of LED lights on the side of a MacBook Pro, so they will always know if the umbrellas are ready for charging.

"I have zero concerns about [safety]," Bouhuys said. "I think it's super cool. I don't know what the wattage or voltage is, but if it's designed to charge a phone through USB, it's probably safe."

The USB ports on the Powersol umbrellas are "intelligent" ports. "Intelligent" USB ports, according to the ZON Technology website, "sense the type of device connected, allowing the battery hub to charge any USB device as fast as a wall outlet."

If students encounter problems with the umbrellas, Buchholz said they should call the FIXit desk at 336-278-5500.