With all five starters returning, expectations rise for Elon's offense 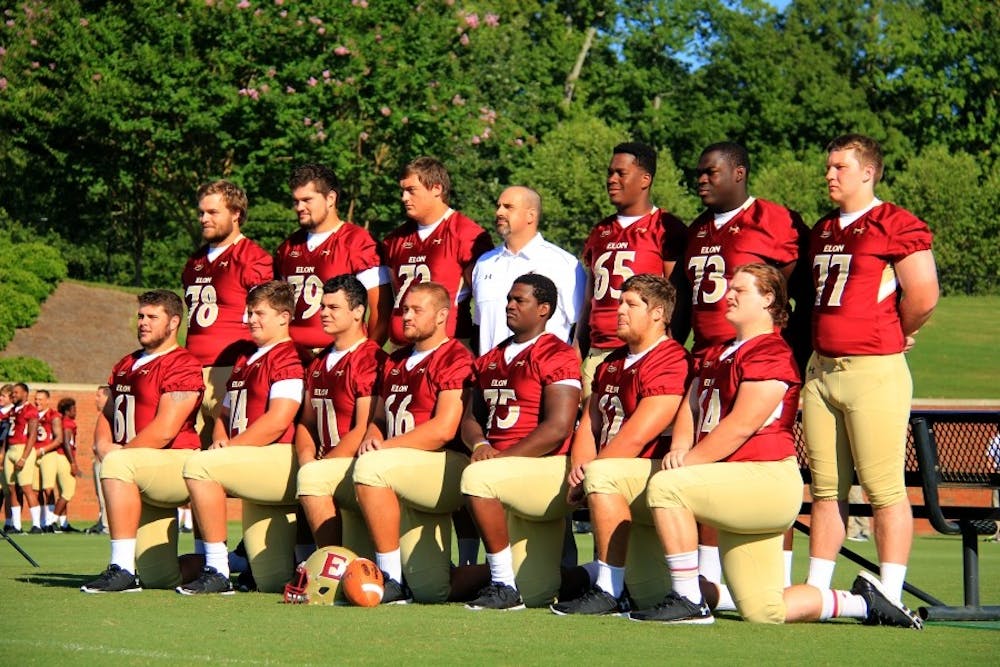 As Scott Riddle ‘11 was wrapping up his speech to conclude the Elon University football team’s day Aug. 23, he asked where the offensive linemen were.

All 13 linemen raised their hands, having gathered near the front of the room. Riddle smiled at the sight of the group sitting with each other.

“You are the most important group on the team,” Riddle said. “You need to eat together, work together and be there for each other.”

For Elon in 2016, there is a lot expected of the offensive line. They return all five starters from last season, and between them, the group had only five missed starts.

And, because of the rare combination of both youth and experience in college football, the expectations for the group are sky-high.

Eating to keep up

Nwokeji usually has two plates of food for breakfast, which is served — like all meals — in Lakeside Dining Hall. Breakfast is his lightest meal of the day.

“I usually have around five plates for lunch,” he said.

Fall camp practices mostly happen one of two ways: a middle-of-the-afternoon practice — with heat often reaching into the 90s, coupled with 90-percent humidity — or two-a-days, with a practice in the morning and another practice or a scrimmage at night.

With the amount of work to be done, Nwokeji doesn’t worry about counting calories as he eats during the day. He figures that if he eats until he is full, he’ll get enough calories to balance the amount he burns in practice.

Usually, breakfast is followed by a workout in the weight room and/or a position group meeting. But on this day, the players dress in their uniforms for team pictures. Nwokeji isn’t the biggest fan of photo day, but he appreciates the fact that the photoshoot is in the morning and not in the middle of the afternoon, like last year.

Nwokeji and his other offensive linemen pose for a position group photo with offensive coordinator and offensive line coach Damian Wroblewski, who is known as “Robo” around the team. Then, after the big team photo and three individual photos are done, Nwokeji is free until position meetings.

An essential part of each day for the football team is sleep. With some mornings starting as early as 6 a.m., and most evenings ending after 10 p.m., finding any time to get some rest is vital.

With the photo day over for Nwokeji around 10:30 a.m. — too late for breakfast but too early for lunch at Lakeside — he instead heads back to his apartment, napping and then eating before returning to the facility just after 1:30 p.m. to get ready for practice.

But because team photo day took up the morning, the position groups meet for an hour before a 30-minute warmup period that leads to practice at 4 p.m. The tight window means Nwokeji gets his ankles and thumbs taped at 2 p.m., a full two hours before practice begins.

Once in the meeting room, Nwokeji and most of the other linemen fight to use a foam roller to stretch their legs as Wroblewski goes over film from the last scrimmage. Throughout this talk, the coach will occasionally go off the rails, using all sorts of topics — such as journalism, morality, each player’s career plan for after football and the internal human struggle between selfishness and selflessness — to talk about life and football.

As all five starters sit in the front row, the discussion transitions to the day’s practice slate, where the team will be testing out situational plays. Wroblewski finds these to be vital for fall camp.

“I want as many different looks as possible,” Wroblewski told his group. “Football is not stagnant, and football is constantly changing situations.”

The offensive line’s work tends to go unnoticed to the average fan’s eye, but the intricacies of their work is broken down bit-by-bit in these sessions, and Wroblewski knows his men aren’t going to receive great accolades.

Still, the craft is vital for the team’s success going forward, and Skrosky believes it is the position that has changed the most since he was hired in December 2013.

“I think we’re physically stronger, and we have more height,” Skrosky said. “Last year, we played three freshmen. They learned what Division I football is all about, and they understood what they needed to do in the off-season.

“We’re still relatively young, with potentially one senior starting, but there’s a lot of repetitions in that group. They’ve had a really good off-season, and there’s no question there’s much more cohesion in that room than there has been in the previous two years.”

After two weeks of fall camp, Wroblewski was impressed with the offensive linemen for the most part. But on this day, multiple players struggle with drills.

“I feel like you guys got through today,” Wroblewski said. “You didn’t use this day adequately.”

While one day may not seem like much, he stresses how important it is to use each day to its fullest capabilities.

“Our most valuable commodity is time,” Wroblewski said. “We don’t know how much of it we have, and we don’t know when it runs out. So the moment you step on a college campus, you’re getting closer to the end.”

As Wroblewski finishes the day, he tries to impress upon the offensive lineman that, while he may say some harsh things to the players throughout the day, he’s trying to improve them. He goes around to each of the players he’s coached for at least one year, asking if they trust him. Each lineman responds with a, “yes,” which Nwokeji reiterates later.

“Take care of these guys — they’re protecting you,” Riddle said. “Take them out to eat dinner. And not just to the dining halls, either. Pay for it.”

Sophomore quarterback Connor Christiansen heard Riddle’s message loud and clear, and finds comfort in the fact that they have consistency across the board.

“It’s definitely good to see familiar faces, because we’ve been learning to play together,” Christiansen said. “Going up there knowing that those five guys are going to be there again, and they work together, they eat together, they talk all the time, and they’ve become best friends. It’s awesome for me to see with the experience that is there and it’s experience at a young age. We still have a lot to learn and a lot of growing. I mean, Oli just turned 19. The future is looking good.”

The future is looking good, but the future needs to be now. Elon’s success on offense is predicated on it. But Nwokeji — and, frankly, everyone on the team — is ready for it.

“We’ve progressed a lot, and I know the young offensive line will progress even more,” Nwokeji said. “They’re going to be 10 times better.”