Giving it all, giving it back

On, off field, Roper commits to community 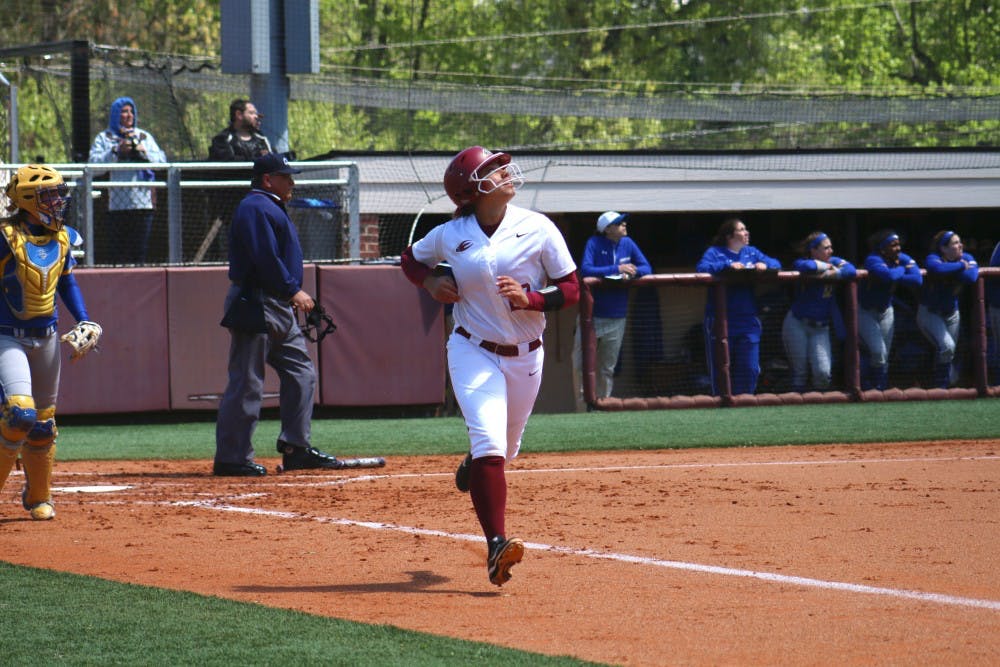 
Junior catcher Emily Roper (23) runs to first and watches as a ball she hit heads to the warning track. Roper has been a consistent force in the middle of the lineup, hitting 20 homers in her Elon career so far.

When making her college decision, junior catcher Emily Roper knew she was going to be a student-athlete.

She found her way to Elon, where she has so played in 143 of the Phoenix’s 145 games since she’s stepped on campus. This season, Roper is batting .333 with five doubles, five home runs and 29 RBI.

With numbers like that, it might be tempting to let them define her. But Roper’s career at Elon — and her path to the softball program — is far more three-dimensional than a stat sheet could capture.

It’s unsurprising that Roper would look for a mix of academic and athletic reputation in her college search. She was in the National Honor Society in high school, a National Achievement semi-finalist and a NMSQT Commended Scholar in 2012. She even made the Academic All-Greater Miami Conference team her last two seasons at Princeton High School in Cincinnati, Ohio.

But even after she and her father had started to answer the “where” question, they had another one left: “What?”

Though she knew she wanted to play a Division I sport in college, Roper didn’t know which she wanted to pursue. In high school, she played both varsity basketball and softball.

Junior outfielder Alaina Hall said she was surprised by what she found when she searched her future teammate online before moving in her freshman year.

“She’s a really phenomenal basketball player, and she didn’t know if she was going to come play softball or basketball, here or anywhere,” Hall said. “So I had creeped on her before. I went and typed her name in, and all these things come up about basketball. And I’m like, ‘Why is she playing softball?’”

So with the “where” and “what” still left to figure out, Roper started reaching out by sending emails to coaches at the schools on her list. That’s when Elon — and softball — started to stand out.

“Before I was born, [softball head coach Kathy Bocock] was at a different school, and she coached against my uncle,” Roper said. “One of the reasons I heard back from her was because she recognized my last name.”

Bocock said Roper’s uncle contacted her and asked for her help. He wanted a coach he had worked with before and whose opinion he valued to help the Roper family make the decision of whether Roper should play softball or basketball in college. Bocock immediately agreed.

When she arrived at camp, though, Roper made a special kind of first impression.

“When she got here, she forgot her equipment,” Bocock said.

She said Roper’s dad had to go get her a bat so she could participate in the camp. Once they passed that hurdle, Roper’s work ethic had the opportunity to show. That’s when Bocock realized how valuable she would be to the program.

“We watched her at camp, and she’s exactly the person now that she was then,” Bocock said. “During lunch breaks, she just wanted to work on her hitting.”

For Roper, the “where” and “what” pieces fell into place during her experience with Bocock at camp.

“I came down, and obviously the school is gorgeous, but the coaches were really welcoming. It’s hard not to see Coach Bo’s energy,” she said. “You talk to her for 30 seconds and you know this is the kind of person who brings energy to everything she does.

“I think I decided in that moment that if they offered me a scholarship that I was going to come here. This is somebody that I want to play for. This is somewhere I want to be.”

Making her mark at Elon

Once she made her decision, Roper committed herself to the Elon and Bocock’s softball program.

“When she got here as a freshman, there was never a time she wasn’t getting extra work,” Bocock said. “Her work ethic is incredible.”

She made a name for herself as a hard worker, hitting before and after practice with Hall to work her way to a starting spot the spring of her freshman season — in which she started all but five games, a number few other freshman softball players could match.

Bocock said Roper earned everything she got, even though softball didn’t come as naturally to her as it did the other players. In fact, Bocock said it was the need to work harder to match her teammates that made Roper stand out.

“Even though she was raw, she was ready to get on the field that spring,” Bocock said. “She doesn’t let anyone outwork her. Her work ethic and her ability to get better every day is what created the opportunity for her to step in and do what she’s done.”

But even with her outstanding commitment to softball, Roper committed herself to much more than the team when she settled in on campus.

Roper entered Elon with the intent to double major in English and human services, though she realized early on that double majoring while playing Division I softball was unrealistic. So she did some thinking, then came to an easy conclusion.

“I’ve never been the kind of person to sit around, so I did a lot of volunteer projects [in high school] and just really fell in love with serving other people and working for other people,” she said. “And I knew coming in that whatever career I had was going to be about helping other people.”

So she took her English major down to a minor and began to pursue a major in human services. For her intro class, HSS 111: “The Art and Science of Human Services,” Roper was assigned work with an English as a Second Language class for adults in the community to get her 20 hours of required service. She said that experience was perfect for her.

“It was great for me because it was an opportunity for me to practice my Spanish — because all the people were Spanish speakers — and at the same time help someone else,” she said. “So I continued on. In-season it’s a little difficult to get that service in, but I did a project with that organization last year for the volunteer drive.”

Now, since that class is over, she participates in community service whenever she gets the opportunity. And sometimes, she even makes the opportunities for herself.

The softball team volunteers with Allied Churches the first Friday of every month in the fall, serving dinner to food-insecure families in the county. Bocock said even though she split up the team into groups so every player didn’t have to go every time, Roper added extra shifts for herself.

“When she’s involved in anything we’ve asked her to do, she’s the first one on it,” she said. “And it’s real. She loves people, and there’s no forcing her.”

Hall couldn’t agree more, and said Roper dedicates so much of her energy to serving her community because helping people is so important to her. Hall also said Roper’s goal of becoming a family lawyer speaks to her dedication to others before herself.

“Of everything she could do and make thousands and thousands of dollars, she wants to give it back and be able to help the community,” Hall said.

With only so many hours in a day, many would find it difficult to find the time or energy to devote to pursuing as many passions as Roper does. But just like with her community service, the key is simple: she puts others first.

“I just want to do whatever I can to help the team,” Roper said.

Sometimes, putting herself second means putting herself in the way of a rogue pitch. In the first half of this season alone, Roper has been hit by pitches 13 times, for a career total of 35.

“I think right now I’m at five bruises and counting on my left leg alone, but it’s a good way to get on base,” Roper said. “I was always taught to never be afraid of the ball, and I’ve never been afraid of the ball. So unless it’s coming at my head, if I wear it, I get on base and it helps the team.”

Hall said because Roper knows and commits to her priorities, she can manage her time and give her energy to whatever needs it.

“Her school comes first, and she does everything she has to do that way,” she said. “And then if anything interferes with softball, she’s always willing to stay after or some before and make sure she doesn’t cheat the team out of anything.”

That willingness to put in extra effort for others is evident to the team, and not just as a total number of bruises or number of community service hours.

“She sleeps here [in the clubhouse] all the time,” Hall said. “I have a bunch of pictures of her.”

According to Bocock, for Roper, it’s not a matter of dividing her time between her many commitments. Instead, it’s about committing herself completely to everything that matters to her.

“She just really prides herself on anything and everything that she does, and that’s what makes her such a special person,” Bocock said. “A lot of people would pride themselves on certain avenues of their life, but she prides herself on every aspect of what she does: family, education, community service, playing ball here for Elon, playing ball here for me.”

Hall knows that mindset will follow Roper past softball at Elon and into the rest of her life.

“Whatever she decides to do, if it’s social work or a family lawyer, she’ll be great at it, because she puts everything into it,” Hall said.