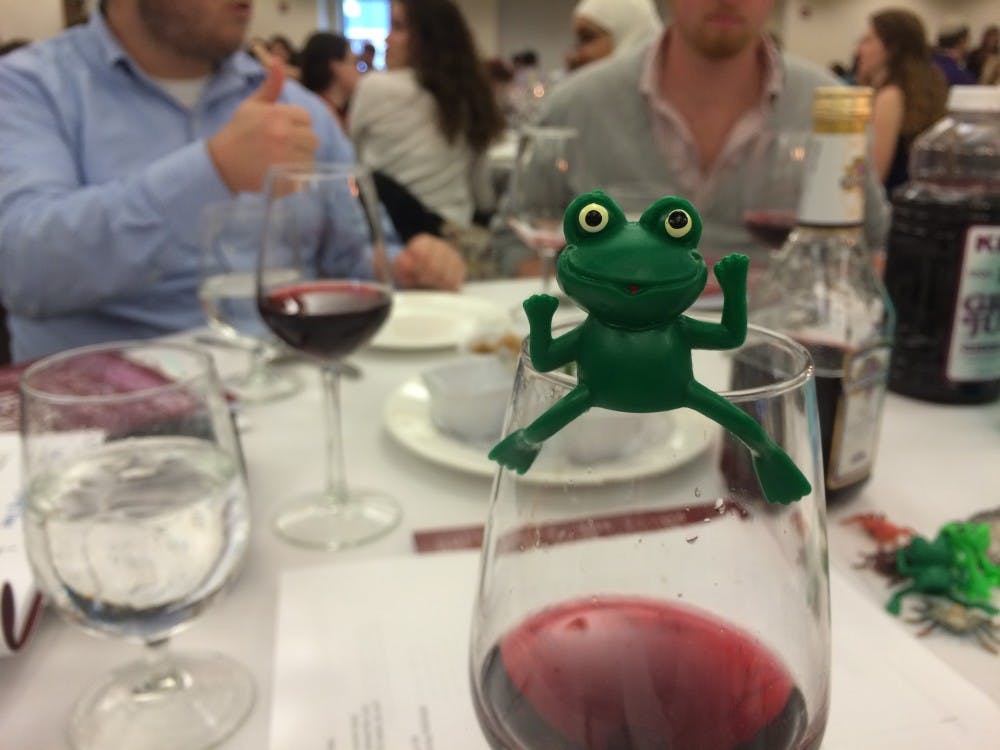 
A frog finger puppet languishes on the rim of a glass of Manischewitz during the Passover Seder at Elon University April 22. Elon Hillel's Seder embraces the interactive spirit that keeps attendees of all ages engaged in the traditions and stories of the Jewish holiday of freedom.

Why is this night different from all other nights?

This night — more specifically, Friday, April 22 — was Passover, the Jewish holiday celebrating the freedom of the Jewish people. A crowd big enough to almost fill Upstairs Lakeside powered through the rainy weather to celebrate the holiday with Hillel at 5:30 p.m.

“Passover celebrates the Exodus from Egypt to the desert and then eventually to the land of Canaan, which is now known as Israel or Palestine," said junior Iliana Brodsky, co-president of Hillel at Elon University.  "During this Exodus and during the Passover Seder, we talk about what it meant to be enslaved and what it meant to be free."

The ceremony to celebrate Passover, known as the Seder, translates to "order" in English. There is a set of steps that every Passover Seder follows, though each family or community that puts together a Seder has some flexibility to make it their own.

“Everyone’s Passover Seder looks different," Brodsky said. "You’re given this framework, which is pretty strict, but then you get to do with it what you’d like." She laughed, then continued. "Some of them can be boring. But most contemporary Jews have really taken it upon themselves to make sure that Passover becomes something that everybody really feels is important to continue on."

The goal of every seder is making Passover — with all its foods, prayers, songs and, most importantly, stories — a tradition everyone can and wants to participate in. According to Associate Chaplain for Jewish Life Rabbi Meir Goldstein, that's the genius of the tradition.

“The rabbis that constructed the Seder 1700 or 1800 years ago were brilliant in that they constructed it in such a way that it’s based on people interacting," he said. "It’s based on engagement. It’s based on getting people to ask questions."

The goal of making the Seder interactive and attractive to everyone involved, especially young children, drives many of the traditions. From the asking of the four questions to the post-dinner hunt for the afikomen (a piece broken off the matzah at the beginning of the Seder and then hidden in the room) — all are jobs for the youngest children present.

Brodsky said those parts of the Seder that bring in the children are her favorite parts.

"Toward the beginning of the Seder, the youngest person at the table — again, this is about getting kids involved and making sure the story is passed on — the youngest kid at the table reads the four questions. They ask, ‘What makes this night different than any other night?’

"It’s a really important part of the Seder for me because even though I’m 22 years old, I’m still the youngest member of my family, and it’s kind of been my role in the Seder. Every year I remember as a kid practicing and singing them out loud to my parents and really feeling important, even at such a young age.”

Brodsky holds a photo of her family's Seder table, which her father sent her that morning. Photo by Hali Tauxe-Stewart, photo editor.

This spirit of interactivity and engagement was fully embraced by the students who planned and ran the Seder, sponsored by Hillel. More than 10 students led different parts of the evening, directing attendees to specific pages in the haggadah (a kind of instruction book for the Seder) and leading prayers, songs and ritual activities like pouring wine and breaking matzah).

The student volunteers were scattered throughout Upstairs Lakeside, bringing the singing and reading to the attendees' own tables. They invited everyone in attendance, whether it was their first Seder or their 50th, to read along in their own Haggadahs, sing along to songs printed out and left on the tables and drink along as each of the traditional four glasses of wine (or grape juice) were poured.

In the Passover spirit of inclusion and engagement, follow along with the interactive setup of Elon's Passover Seder in the middle section below, led by Brodsky's voice and photos by Hali Tauxe, photo editor.

The symbolism of the Seder (photos: ceremonial handwashing and spilling wine)

Each person at the table washes the hands of the person sitting next to them twice, once before eating the karpas (parsley sipped in salt water) and once later while saying the handwashing blessing, or "netilat yadayim." This tradition is meant to prompt children to ask questions about the Seder and the Passover story. Photo by Hali Tauxe-Stewart, photo editor.

Seder participants dip their pinky fingers in their wine and drop 10 dots on their plate to symbolize the 10 plagues as they say the names of the plagues out loud. Photo by Hali Tauxe-Stewart, photo editor.

The parsley and salt water

The importance of children

Putting toys on the table that relate to the traditions of the Seder (e.g., frog finger puppets to symbolize the plague of frogs) keep children involved. Photo by Hali Tauxe-Stewart, photo editor.

The afikomen (photos: breaking the matzah and finding the afikomen)

One of the first steps in the Seder is the breaking of the matzah. The smaller piece gets broken up further and paired with charoset to make "matzah sandwiches," but the larger piece, the afikomen, is hidden for children to find at the end of the night. Photo by Hali Tauxe-Stewart, photo editor.

Junior Maryclaire Schulz won a free drink at The Oak House as a prize for finding the afikomen. Photo by Hali Tauxe-Stewart, photo editor.

So what made this night different from other nights?

It could have been the food (matzah balls and brisket), the wine (sweet Manischewitz) or even the songs that seemingly everyone in the room knew ("Oseh Shalom" and "The Frog Song," among others).

But Goldstein had a different answer.