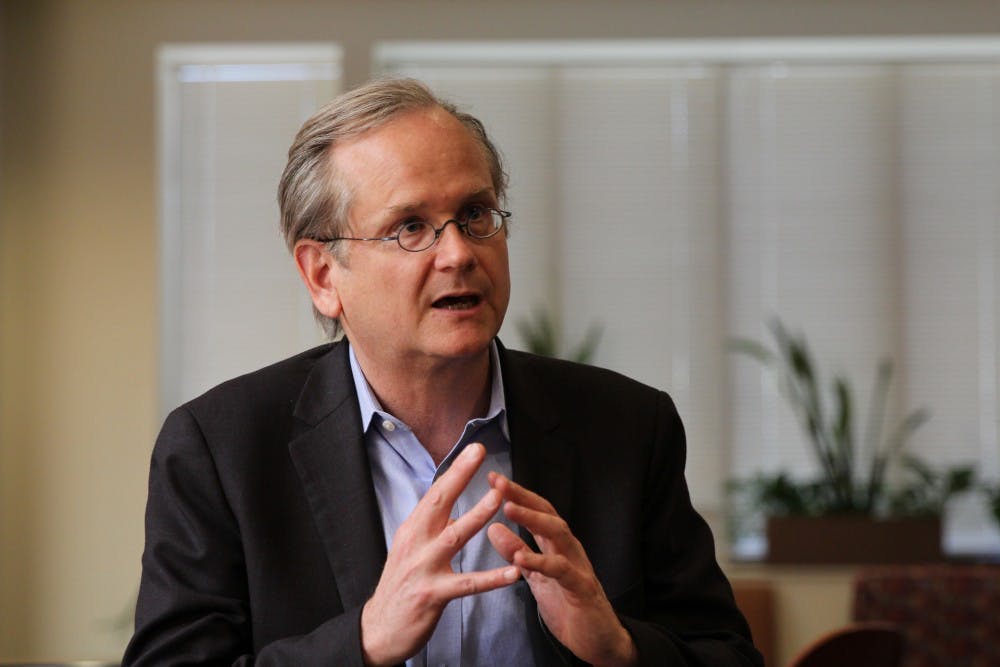 
Former Democratic presidential candidate and Harvard Law professor Lawrence Lessig discusses the need for significant campaign finance reform prior to Tuesday event at the Elon University School of Law. He argues Congress is not doing its job properly because of large campaign contributions from the wealthiest people in the United States.

Before the event began, The Pendulum spoke with Lessig to get his thoughts on campaign finance reform, House Bill 2 and potential endorsements.

I went on your lessig2016.us website and found a video on the homepage where you say, "Until we end the corruption that has crippled Congress, none of their promises are even credible." Why is campaign finance reform such an important issue to you, and how can the issue be addressed?

We have to recognize that we have a republic, which means we have a representative body that passes the laws that address all the issues any of these candidates are talking about. Whether it's climate change or the debt or healthcare or student debt — it doesn't matter what the issue is — but we have a Congress that is basically crippled, and it's a failed institution in our democracy.

It's not a representative body because we suppress the vote all across the country from voter ID laws and similar techniques that make it harder for some people to vote than others. All of these are reasons why Congress doesn't work.

How does one go about fixing Congress?

We fix it by recommitting to the idea of an equally representative Congress. Congress represents all of us, and the most important change to make is to change the way we fund campaigns so that when candidates for Congress are spending 30 to 70 percent of their time raising money, which is what they do now, they're not spending all their time raising money from this tiny, tiny fraction of the 1 percent. Instead, they're raising money from all of us. That's the critical change that would make it so the tiny fraction of 1 percent no longer controls what Congress does.

With regard to your presidential campaign, you were hoping to win but you had trouble getting onto the debate because of Democratic Party rule changes. Given the divisiveness in Washington, D.C., and struggles getting your voice heard, how do you plan to continue trying to effect change?

I plan to do whatever it takes. We made a gamble when I ran for president that we could get enough support to get into the debates.

We felt we'd do that in two stages. One is to raise a boatload of money very quickly, and secondly to then manifest the support of the polls so that under the rules I would qualify for the debate. We did both of those things. We raised the money we said we would raise in less time than we said we would raise it — $1 million in less than a month — and we qualified by getting 1 percent in three national polls within six weeks before the second debate. But then when we qualified, they changed the rules.

That change for me was the most surprising thing. I would never have predicted they would have played that game.

But today, where do you go from that point because you were trying to secure the support? Largely, the issues you're talking about are against Republicans. So when you can't get that support from the Democratic Party and are trying to fight Republicans, what's the next step moving forward for you today?

Well, today I think the next step is to figure out what the strategy could be. I have an answer right now. After I ran for president, I had to go back and teach an incredibly heavy burden of courses to make for what I had given up.

I just finished teaching this week, so I'm just beginning to try to catch my breath. What many of us are doing in this movement is to find every single way we can to increase the pressure necessary to get the Congress to do something. I participated in something on Democracy Spring, which started as a march from Philadelphia to Washington [D.C.] and then sitting in at the Capitol. Over the course of the week, they had the largest number of arrests at the Capitol in the history of the Capitol with people demanding that Congress take up changes to the way Congress funds its elections because that's something you can do tomorrow.

I think the question is, "How many different experiments can we launch to try and create the pressure necessary to bring about this change?" This year has been the most optimistic and the most pessimistic message on that. It's the most optimistic because for the first time even Republicans are talking about the corrupting influence of money in politics.

Donald Trump totally defeated Jeb Bush because he was able to frame Jeb Bush as completely responsive to the money and Donald Trump as independent of the money. That's progress, and I think that the opportunity to have a broad base of people on the Democratic and Republican side recognizing this problem is exactly the conditions necessary for solving it.

Here in North Carolina, House Bill 2 just passed. Do you envision the courts striking it down anytime soon? If so, what would that timeframe look like in your mind?

It's pretty hard to see how HB2 survives given existing law. It's depressing that this is what conservatives are fighting about. Why should this be an issue? When I was young, conservatives had all the great ideas. They had all the ideas that were interesting and interesting to fight about. This just seems so silly, and it saddens me to see that a state like North Carolina gets drawn into this.

Have you made an endorsement yet for any candidate or are you planning to?