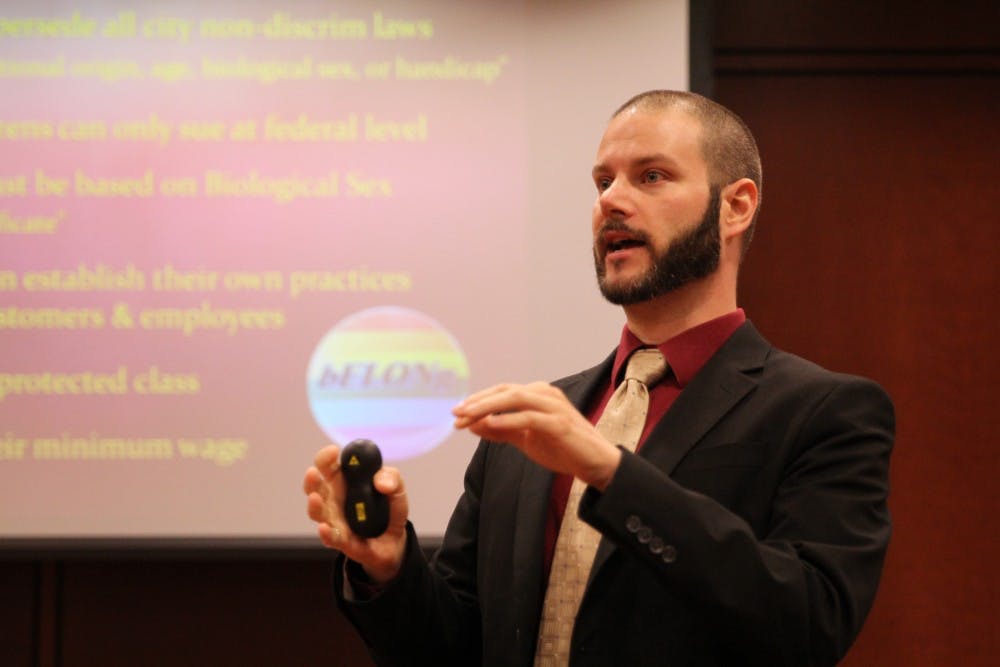 In the wake of the controversial passage of House Bill 2, which forces North Carolinians to use public restrooms of the sex listed on their birth certificate, much discussion has taken place at Elon University about inclusivity.

While Elon isn't directly targeted by the law since it is a private institution, students, faculty and local residents gathered Wednesday afternoon in LaRose Digital Theatre to become better informed on the bill and ask thoughtful questions.

Gender & LGBTQIA Center Director Matthew Antonio Bosch and Assistant Professor of Political Science and Policy Studies Jason Husser led the hour-long event, focusing the first half on policy implications and the second half on audience questions.

“Letting people know all the pieces of information and all the parts about the bill can help people make informed decisions," Husser said.

Husser explained how the city of Charlotte passed an ordinance to expand nondiscrimination protection to the LGBT community. Though the ordinance previously failed by a 6-5 vote, it passed Feb. 22 with a 7-4 vote.

But on March 23, the North Carolina General Assembly voted on the passage of House Bill 2, which struck down the Charlotte ordinance which would have gone into effect on April 1. The bill also stated people must use public restrooms based on the sex assigned to them at birth. The bill was passed 84-25 in the House, 32-0 in the Senate and immediately signed into law by Gov. Pat McCrory.

Despite the large support from the legislature in the final vote count, Husser said Democrats left the floor of the Senate in protest. In the wake of the public controversy that ensued after the bill's passage, McCrory blamed the media for sparking public dissent.

"The governor says media misinformation is to blame for negative view of legislation," Husser said. "That’s often a good way to score points if you’re a politician, to blame the media."

As the informational session progressed, Husser and Bosch explained some of the lesser-discussed topics. Bosch expressed concern with a minimum wage clause being buried in the bill to intrude on local government.

"No city can adjust their minimum wage," Bosch said. "Oh wait, wasn’t this a bathroom bill?”

Since House Bill 2 strips city minimum wage powers, it can be seen as a state intrusion on local affairs.

Husser and Bosch made it clear that the bill is not only about LGBT discrimination.

Elon has made efforts to address the controversial bill by speaking out against discrimination and in favor of inclusivity.

"We’re trying to meet as many needs as possible and I think that’s something Elon should be proud of," Bosch said of the 90 universal restrooms Elon offers.

"I want to add my voice to those decrying any attempt to legislate discrimination in any form, and in the case of HB2 specifically, deny rights to LGBTQIA citizens of North Carolina," Lambert wrote. "I am proud to be part of a university community that is a voice for inclusion and equal protection for all citizens of the state."