Election is rigged against Sanders, Trump 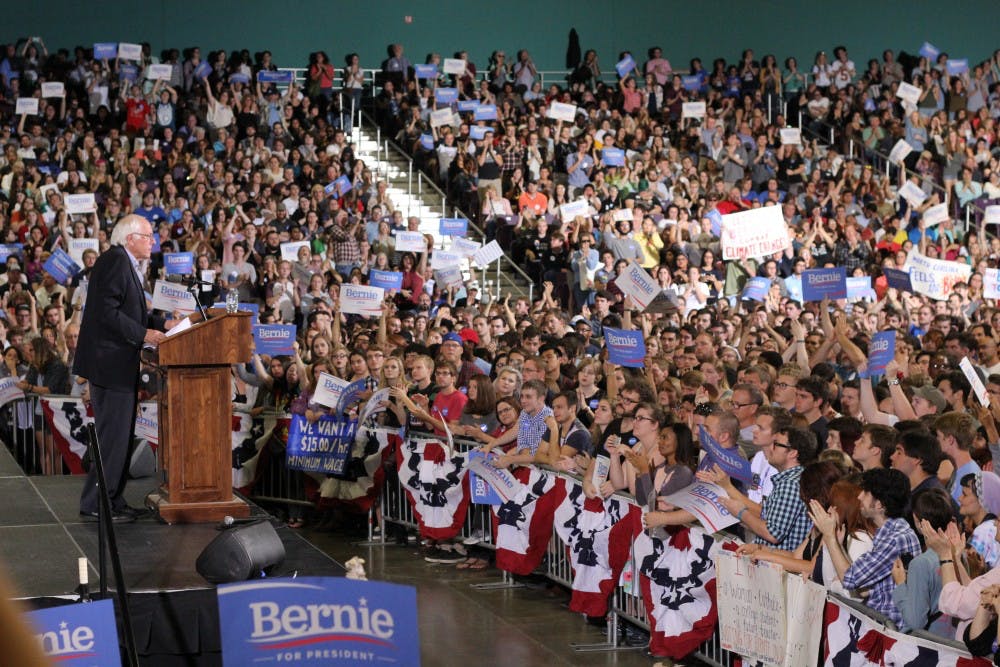 Wyoming is the least populous state. With just 29 Republican and 18 Democratic delegates in the caucuses and three Electoral College votes, it carries very little significance in the 2016 presidential election.

But results from the April 9 Democratic caucuses reflect a larger issue of voter disenfranchisement. Though Sen. Bernie Sanders (I-Vt.) carried 55.7 percent of the vote, he lost 11-7 in the overall delegate count to former Secretary of State Hillary Clinton. A clear message was sent to voters: your voice doesn’t matter.

As a person who aims to cover politics as fairly as possible, I get easily frustrated with common misconceptions people have about the electoral process. One of my biggest areas of frustration is the widespread notion that voters elect candidates for the party nomination. In reality, they elect delegates, who in turn, select which candidate will secure the nomination of their respective party.

Prior to Tuesday’s New York primaries, Clinton led in popular votes by 2,403,659, according to Real Clear Politics. This difference gives Clinton about 57 percent of the popular vote. But six U.S. states — Alaska, Iowa, Maine, Nevada, Washington and Wyoming — are not truly factored into the popular vote count because of their caucus format.

While Sanders won Alaska, Maine, Washington and Wyoming, Clinton won Iowa and Nevada. In these six states Sanders had significantly higher margins of victory. In fact, Sanders’ victory in Wyoming was his slimmest one of the six states mentioned above. Meanwhile, Clinton won Nevada and Iowa by just 5.3 percent and 0.3 percent, respectively.

Clinton has won 18 states overall to Sanders’ 16. Taking into account the six states mentioned above, Clinton’s popular vote lead is likely closer to 55 percent. So it should upset voters that she has more than 62 percent of total delegates. Because all remaining delegates from state primaries are allocated proportionally, the chance of Sanders securing the nomination is slim at best.

Regardless of your political affiliation and candidate preferences, the Democratic system is not reflecting what voters are saying. There is still a sizable majority support for Clinton, but Sanders’ chances are diminishing each day because of the electoral system in place.

Though it is worth noting pledged delegates awarded to Clinton are at 55 percent, which is more reflective of voter preferences, she has secured 85 percent of the total superdelegates. It is possible for superdelegates to flip sides, but it looks like Clinton has the nomination locked up for the time being.

The election is also rigged on the Republican side. Regardless of your stance on businessman Donald Trump, he remains the leader of the field and the only candidate who could secure his party’s nomination before a convention.

Because there are 2,472 total delegates available for the Republican Party nomination, a candidate must earn half of the delegates plus one. Similarly, a Democratic candidate must get 2,382 delegates out of a possible 4,763, which amounts to 50 percent plus one delegate.

It would seem unfair for the parties to be held to the same standards given the disparity in the number of people who ran for office. Including names like Lawrence Lessig, Lincoln Chaffee, Jim Webb, and Martin O’Malley, there was a total of six Democratic candidates.

In the Republican Party, excluding names of people who didn’t appear in any nationally televised debates, there were still 17 candidates who ran for president.

Requiring a candidate to earn 50 percent plus one delegate in an election year where 17 candidates appeared in national debates is insane.

Though Trump may not be able to get the required number of delegates, he should receive the party’s nomination if he maintains his lead over Sen. Ted Cruz (R-Texas).

Prior to the New York primaries, which Trump was widely predicted to win handily, he led Cruz by 210 delegates and Ohio Gov. John Kasich by 612. Trump also entered New York with nearly two million more popular votes than Cruz.

The voters have clearly said they want a two-person race between Trump and Cruz. Kasich, whose only pathway to a nomination is a contested convention, is not the voters’ candidate of choice. Though he might have the best chance in a potential head-to-head with Clinton, he should drop out because of the lack of support.

With all this said, this is an unusual election. If someone were to predict Trump would be the Republican leader and Sanders would be close to Clinton, you likely would have been laughed at. No matter what your political beliefs may be, Trump and Sanders should be more likely to win their nominations than they are at the moment.

While Clinton will likely win the nomination, Sanders should have more of a fighting chance than he does right now. For better or for worse, Trump deserves the Republican nomination because that is what the voters have said they want.

This article was written before the New York primary results were revealed.