Statement on House Bill 2: "In regard to the use of restrooms, we reaffirm our position that individuals should use facilities in which they feel most comfortable and align with their gender identity." 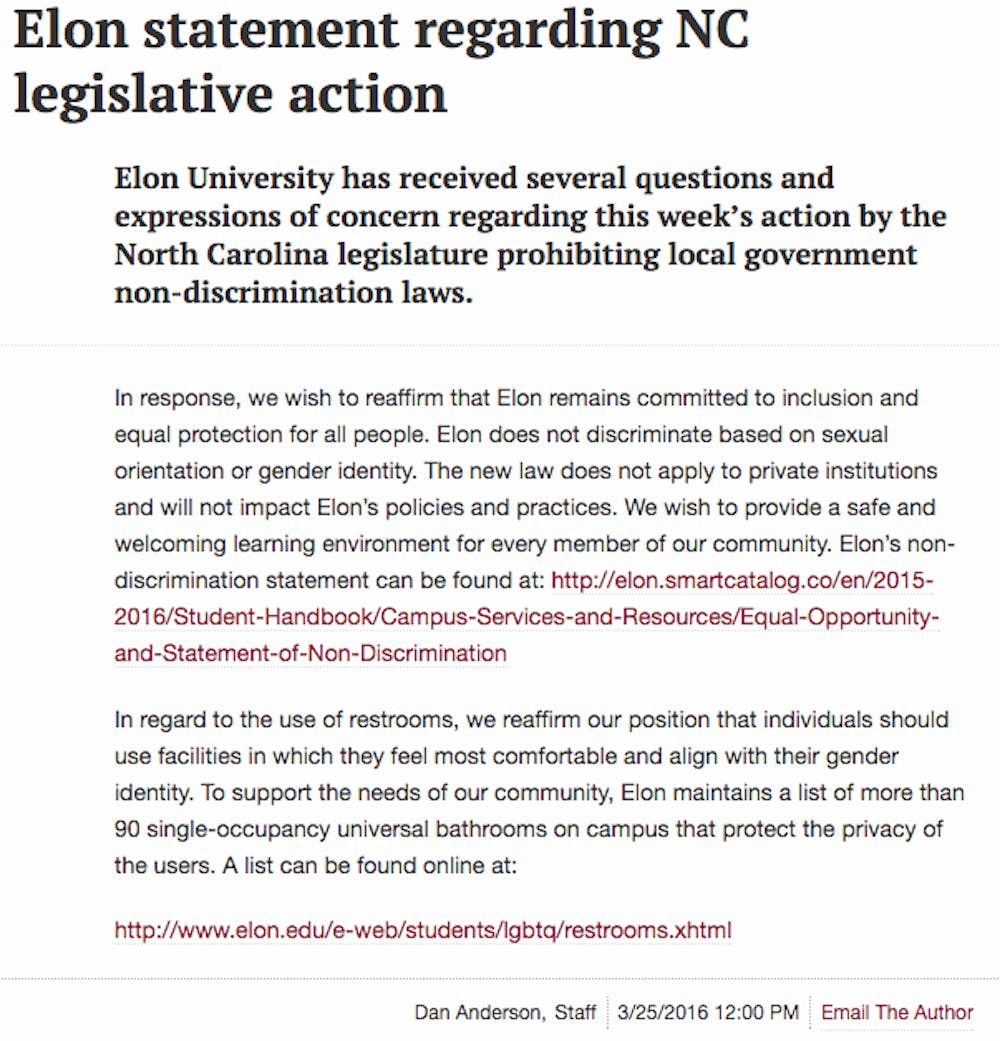 Elon University issued a statement at noon today to reaffirm the university's commitment to inclusivity and non-discrimination.

"Elon remains committed to inclusion and equal protection for all people," read the statement. "Elon does not discriminate based on sexual orientation or gender identity."

The statement came in response to the North Carolina General Assembly's Public Facilities Privacy & Security Act, also known as House Bill 2. The bill invalidated Charlotte's recent legal protections afforded to members of the LGBT community, including a provision for transgender individuals to use public restrooms of the sex with which they identify.

According to the bill, the act is designed "to provide for single-sex multiple occupancy bathroom and changing facilities in schools and public agencies and to create statewide consistency in public accommodations."

Because the bill specifically applies to public institutions, Elon said the bill will not affect its operations.

"The new law does not apply to private institutions and will not impact Elon’s policies and practices," the statement said.

Regarding the use of restrooms, the university said "individuals should use facilities in which they feel most comfortable and align with their gender identity."

There are more than 90 single-occupancy gender-neutral restrooms on Elon's campus designed to protect the privacy of their users. A full list of universal restrooms is available here and a detailed map is provided below.

Ordinance defied common sense, allowing men to use women’s bathroom/locker room for instance. That’s why I signed bipartisan bill to stop it

I signed bipartisan legislation to stop the breach of basic privacy and etiquette, ensure privacy in bathrooms and locker rooms.

Despite McCrory's assertions, the bill received some backlash from state legislators.

House Bill 2 was passed 84-25 in the House after three hours of debate and 32-0 in the Senate after Democrats left in protest, according to The Charlotte Observer.

Though the bill has made national headlines and has sparked heated debate across the United States, it has received significant opposition from the Elon community on social media.

'08 alum Lauren Emery applauded Elon for issuing a statement and called for a repeal of the bill.

According to a separate non-discrimination statement from the university, "Behaviors will not be tolerated that may be considered discrimination."