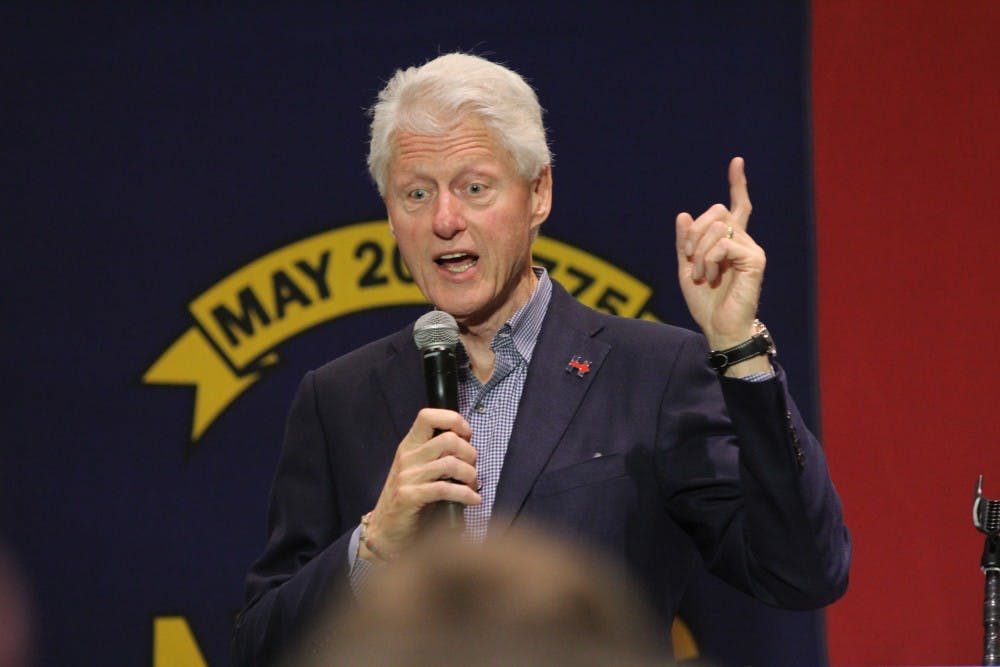 
Former President Bill Clinton addresses education issues at the Elon University School of Law Monday afternoon in an effort to garner support for his wife before the North Carolina primaries.

Throughout the course of his speech, Clinton stuck to addressing policy issues relevant to college students.

He explained how Sen. Bernie Sanders (I-Vt.) proposal for free tuition is not as strong as his wife’s debt-free ideas.

“If you look at what’s really happening to college tuition, I think Hillary’s plan works better and here’s why: Her plan is debt-free degrees for everybody,” Clinton said.

Clinton said college debt is crippling students because loans cannot be refinanced. He explained how his wife would consolidate loans into a mortgage-like instrument for people to have the option of paying over the course of 20 years.

“A college debt is the only loan you cannot refinance,” Clinton said. “Did you know that? If we just allow people to refinance their college loans tomorrow at current interest rates, 25 million of you would save $2,000 just by doing that.”

Though educational issues were a central talking point, Clinton also discussed healthcare, immigration reform and the overall significance of the 2016 presidential election.

Clinton said it was important to expand Obamacare and make healthcare even more accessible to the general public.

“Drug prices are still too high,” Clinton said. “The insurance market doesn’t work for many small businesses … Underlying all that is that we’ve not taken the lessons we’ve learned in the last five years far enough.”

On the issue of immigration, Clinton argued the Republican Party, particularly frontrunner Donald Trump, must stop “demonizing Muslims” and recognize the strength of diversity in the United States.

In Clinton’s speech, he tried to dispel the notion that his wife is an establishment politician. He explained how Hillary has consistently challenged authority since the first time he met her.

“In my lifetime, she’s the best change maker I ever worked with and I saw it more than 40 years ago,” Clinton said. “We’ve only been married 40 years because she turned me down two times.”

He talked about how Hillary helped lead the fight for Congress to support the passage of Obamacare by convincing members to jeopardize and sacrifice their political careers in order to do what is best for the country.

“When people lay down their careers, they deserve something better than to be called part of the establishment,” Clinton said.

Toward the end of the speech, Clinton rallied for supporters to cast their ballots in the North Carolina primaries and support his wife for president.

“It’s not too late to early vote and we’ve got to get the vote up,” Clinton said. “This is a big election. If you’re a Democrat or a progressive, we can’t give the other party — given the spirit of their debate — the Congress, the White House and the Supreme Court.

Clinton’s visit to the law school was arranged late Saturday, according to Elon Law Dean Luke Bierman. Though it was difficult to arrange plans on short notice, Bierman said he was honored to have a former president visit Elon.

“I’m always excited when we do things that are special at the law school,” Bierman said. “One of the reasons that I’m here is to help think about and develop opportunities for others. Being the dean means doing these kinds of things, so I’m excited that we were able to be a part of it.”

One of Bierman’s favorite moments from Clinton’s appearance occurred when he recognized the innovation Elon Law has brought to the field of law through its unique two-and-a-half-year curriculum.

“This is an interesting, innovative law school and I thank Dean Bierman and all the others who are here from Elon,” Clinton said.

After the event, Bierman reflected on Clinton’s words and echoed the former president’s sentiments.

“We want to make sure that the education and the experience that students have is spot on for preparing them to be lawyers,” Bierman said. “We’ve redesigned our curriculum, we’ve rethought our pricing structure. We really are doing the kinds of things that need to be done to make higher education and legal education relevant and important, and hopefully, more affordable.”

In addition to Bierman, many prominent members of the local community were in attendance. Greensboro Mayor Nancy Vaughan attended the event and offered a brief introduction for Bill Clinton and expressed her support for Hillary Clinton.

“I am proud to support Hillary Clinton for president because she is the only candidate in the race who can break down barriers for North Carolina,” Vaughan said.

Though she addressed the importance of female leadership in politics and the need to elect the first female president of the United States, she said she supports Hillary Clinton because of her vast experience in elected office.

Vaughan argued Clinton would be a more viable candidate than Sanders because she focuses on more than just one issue.

When the event ended, Vaughan said she was happy to have had the chance to introduce a former president on such short notice. On Sunday at 6 p.m., the night before the event, she received a call asking her to deliver the introduction speech. Though the mayor had prior commitments to attend to, she was happy to cancel them for a once-in-a-lifetime opportunity.

“I had to rearrange my schedule and how often is that you can, ‘I’m sorry I’ve got to reschedule because I have to introduce the president,’ Vaughan said. “That’ll probably never happen again.”

While well-known figures like Bierman and Vaughan were in attendance, the event targeted Elon students.

Elon senior A.J. Roshfeld said he remains undecided as to whether or not he will vote for Hillary Clinton for president. Nevertheless, he was thrilled to have hear Bill Clinton deliver a policy-centered speech.

“He gave me the impression that she’s a change maker,” Roshfeld said. “He used that word a lot, but he also gave direct examples of what she wanted to. He really didn’t talk about any other candidate on either side, which I really liked. He talked about what Hillary wanted to do and what her plans were.”