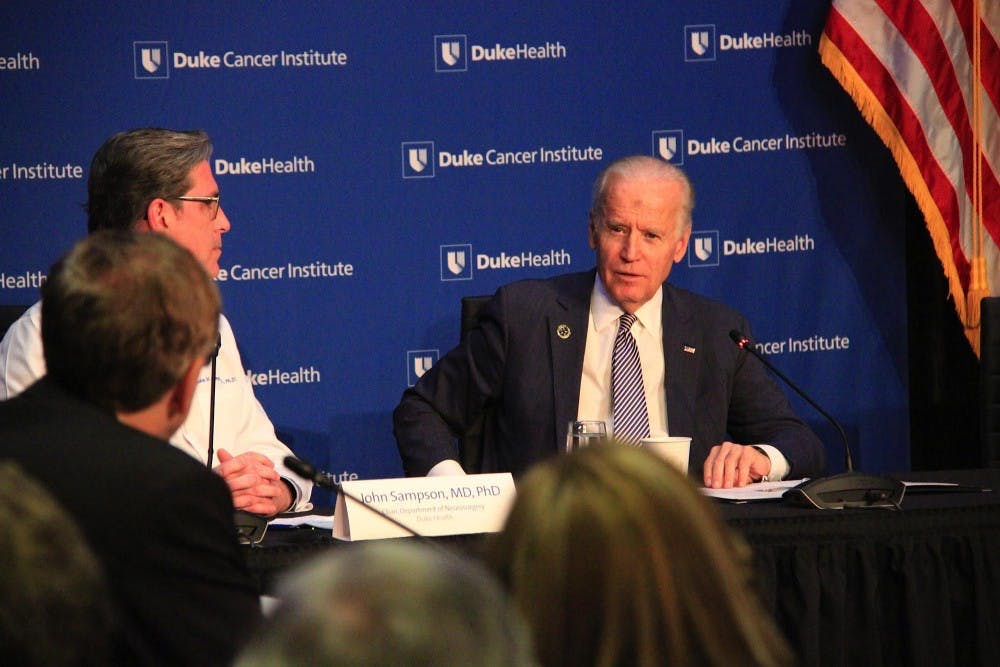 DURHAM — Vice President Joe Biden emphasized the need for increased national attention toward finding a cure for cancer during a round-table discussion Wednesday afternoon at the Duke University School of Medicine.

Biden explained his mission with President Barack Obama to make a decade's worth of advancement within the next five years to search for a cure.

He admitted the journey would be difficult since cancer takes on many forms.

"We’ve learned that there not just one cancer but that there’s thousands of cancers," Biden said.

As the event progressed, he spoke out against the lack of transparency from drug companies, citing the need for more sharing of information.

"The science is ready and we have to figure out a way to share information more," he said. "For a moment, I'd like to focus on big data. I think as an outsider looking for more information, the greatest hope lies in aggregating enormous amounts of data that's out there already."

He then argued more clinical trails should be conducted to expand the amount of available information.

Gayle Harris, public health director at the Durham County Department of Public Health and one of the 10 participants at the discussion, said part of the struggles of expanding clinical trials is educating the public about the progress that has been made.

“Because of this fear of cancer and not knowing all the great advances that have been made, people delay their entrance into the system," Harris said.

Other participants, including Duke Cancer Institute Chief of Breast Surgery Shelley Hwang, said there is a misconception in the United States that clinical trials mean people would be tested like guinea pigs.

Later in the discussion, Biden mentioned the need for nurses to emphasize the human component behind patients, meaning younger people affected by cancer should receive a special kind of psychological treatment.

While Biden said he recognized a growing awareness in metropolitan areas in psychological gaps between older and younger patients, he said there is still more progress that can be made.

Niklaus Steiner, co-founder and board member of the Be Loud! Sophie Foundation, then shared an emotional story about his daughter Sophie's battle with cancer.

When Sophie was diagnosed with cancer in ninth grade, she wrote a poem before she died at 15 of germ cell cancer.

"Be loud / And move with grace / Explode with light / Have no fear," the poem read.

Niklaus Steiner said how his daughter's death prompted him to start an organization to support young cancer patients and their families at UNC hospitals.

Moved by the story, Biden shared how Steiner's story echoes those of millions of U.S. families.

After Biden's son Beau died at 46 on May 30, 2015 from brain cancer, the vice president decided to halt a presidential run for the 2016 election. With his limited amount of time remaining in the White House, he said he would devote himself to strengthening the national commitment to further cancer research.

While there is much that remains unknown and a cure has yet to be found, Biden told those in attendance at the round table discussion that he was honored to be in their company. He said he looks forward to seeing future advancements from the North Carolina medical community.

"The amount of talent that resides here should give people hope," Biden said. "There really is hope.”