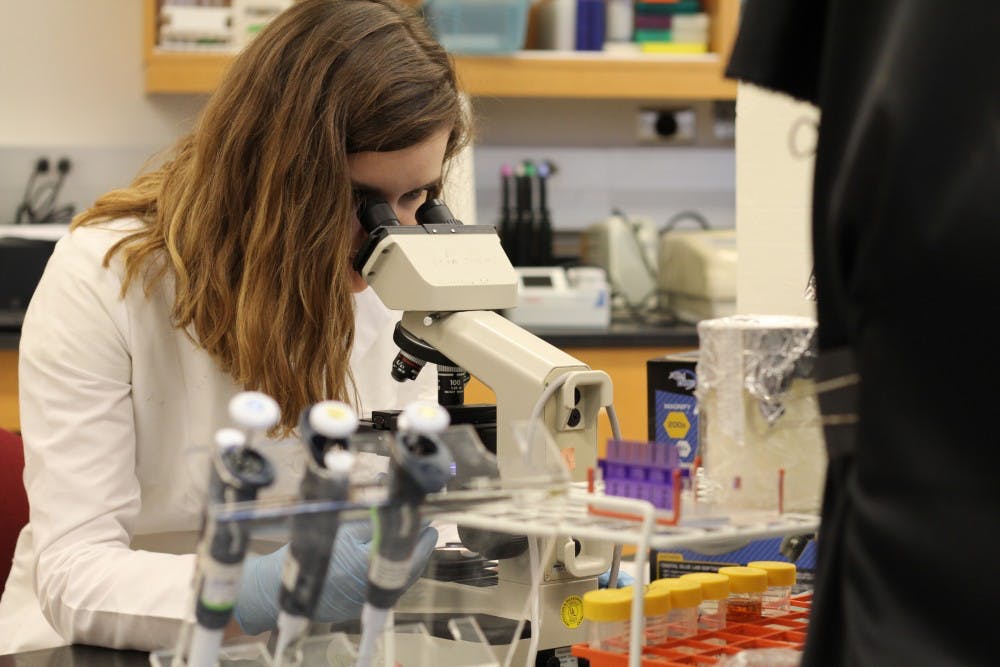 On a chilly Sunday afternoon, senior Megan Sibree walks over to the McMichael laboratories eager to conduct research on cancer induction methods.

Cancer is an all-too-familiar issue for Sibree, who dreams of an end to the crippling disease affecting millions of families across the United States.

When Sibree was 3, her 29-year-old mother died from acute myeloid leukemia (AML). Within the past two years, her two grandmothers died from cancer as well.

“I want to make a difference in people’s lives because I know what it means to lose someone from a disease like that so prematurely,” Sibree said. “I’ve seen firsthand what cancer does to a family.”

As a 2014 Lumen Prize recipient, Sibree has examined the mechanisms of cancer development and how cancer forms in the body. She is specifically looking at how one carcinogen induces chromosome instability in zebra fish through a variety of molecular biology techniques.

Because Elon University offers a finite amount of resources and does not have as large of a research budget as Duke University or the University of North Carolina at Chapel Hill, many students like Sibree focus on under-researched, smaller-scale subjects.

Linda Niedziela, associate professor of biology and Sibree’s research mentor, said the university’s unique approach to scientific research allows undergraduate students to gain more practical experience. Sibree and other passionate students can then transfer their acquired knowledge to graduate school where they can study cancer at a more advanced level.

“Undergrads can be doing research and make a real contribution,” Niedziela said. “They just have to understand it may be a very small contribution. What Elon needs to do is find those little areas that nobody’s all that interested in.”

“Basically, what we concluded from those results was that that technique was not the best way to investigate the mechanisms of chromosome instability induction caused by this chemical,” Sibree said.

Though the results were disappointing, Sibree’s research has helped the larger scientific community save time from further research into this subject.

“With cancer, there’s so much that’s unknown,” Sibree said. “When you look at unexplored topics, even if you don’t get the results that you necessarily want or expect, that information is still critical to the field.”

Research at the university level has recently received increased recognition from the national community and is discussed more as time progresses.

As part of a national tour for finding a cure for cancer, Vice President Joe Biden met with 10 experts Feb. 10 at the Duke University School of Medicine to discuss the federal government’s commitment for further research.

At the round table discussion, participants advocated for more collaboration within the scientific community, increased sharing of big data and encouragement for the public to participate in clinical trials.

But perhaps the most important moment occurred when Biden explained the necessity of dispelling public misconceptions about cancer.

According to Sibree, a lot of people have a misconception that cancer is a single entity with a single cure likely to be discovered in the near future.

“It’s so important that people understand cancer is not one thing where there’s just going to be one cure,” Sibree said.

Yuko Miyamoto, associate professor of biology mentoring a different student for a Lumen Prize research project about cancer, said all students should consider taking an introductory biology course like BIO 113 “Cell Biology” to develop a basic understanding of healthy habits and cancer prevention.

“Science is very interesting, and yes, it can be hard,” Miyamoto said. “But it can also empower students to make healthy choices.”

Elon students, both science and non-science majors, have worked tirelessly to inform students about the realities of cancer and spread the proper information.

Raising awareness outside of research

“It’s grown incredibly since then,” said senior Conor Janda, Elonthon’s marketing director. “I think my biggest pride is not even how much money we’ve raised. It’s just the fact that 25 percent of students participate. I’m not sure if there’s anything else on campus that can brag about having 25 percent of students participate. That’s really exciting to me.”

As Janda prepares for this year’s Elonthon scheduled for April 8-9 in Alumni Gym, he urges students not to forget the ultimate purpose of the event: to raise money for families affected by diseases like cancer.

“Research and programming are really important parts of Duke Children’s Hospital and I’m so proud to say that our money goes to both programming and research,” Janda said.

While Elonthon has become a large-scale platform for raising awareness within the Elon community, other students are looking to make a year-round difference through smaller contributions.

Launching the Love Your Melon campaign

Elon seniors Jessica Cervini and Carly Kasten formed a Love Your Melon Crew on Elon’s campus in January and obtained its maximum number of 20 participants. The group first formed after discovering the message behind a website created by two different college students.

The Love Your Melon campaign began in 2012 out of a simple idea of putting a hat on every child battling cancer in the United States. Since 2012, the website creators have developed an ambassador program in which college students like Cervini and Kasten sell or donate hats for cancer.

For each item Elon’s crew sells through the Love Your Melon website, the group receives a point. Those points allow members to go to local hospitals and homes to give hats to kids battling cancer.

“To have somebody five years old going through such a traumatic experience is just heartbreaking,” Cervini said. “To be able to go to that hospital and let that child smile and forget about what’s happening would be such a remarkable experience.”

Since forming the crew in January, Cervini and Kasten have worked hard to brand the crew’s mission on social media. They have also recently begun talks of forming coalitions with other organizations on campus, such as Elonthon.

Cervini and Kasten encourage members of the Elon community to visit the Love Your Melon website and add Elon University from the drop down menu underneath the “Select a Campus Crew” header when checking out an online order.

Confronting the realities of cancer

While raising awareness about cancer through events and online purchases is important, Sibree urges students to take initiative by educating themselves on the facts.

There will be an estimated 1,685,210 new cases of cancer in 2016 in the United States resulting in 595,690 deaths, according to the American Cancer Society. Through early detection and healthy practices, Sibree said a substantial portion of cancers could be prevented.

“People just really need to be aware of their health and take it seriously,” Sibree said. “Some people don’t realize what they’re doing to their bodies.”