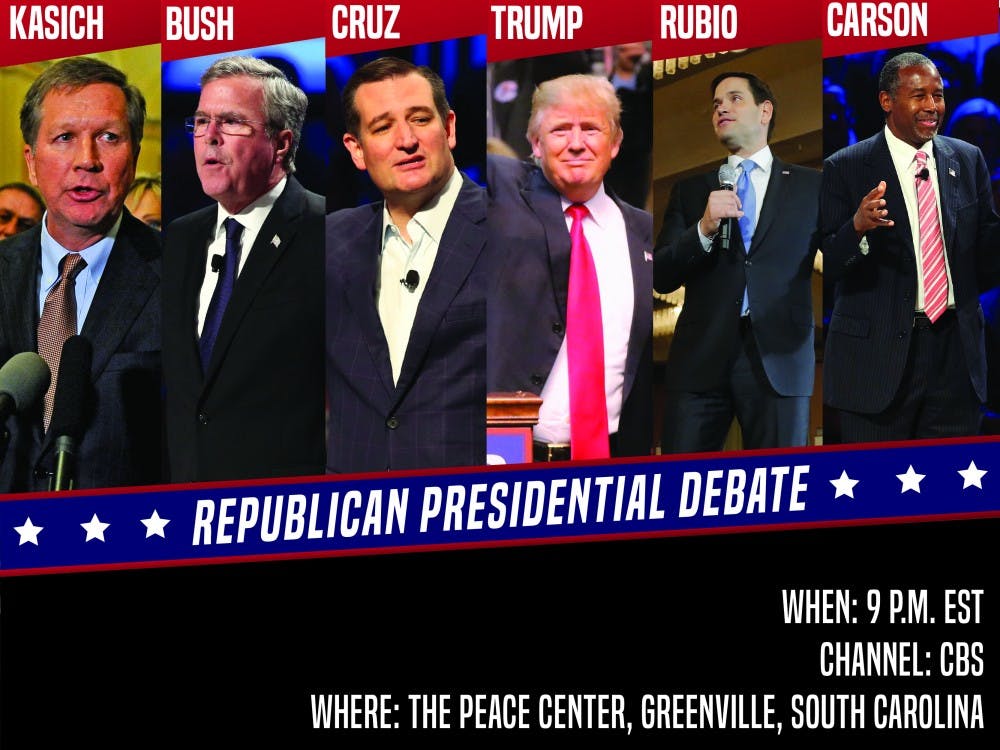 10:40 p.m. "He put so much debt on Florida, and he increased so much spending, that as soon as he left office, Florida crashed," Trump says of Bush. "He was not a good governor."

10:39 p.m. "I think the dysfunction in Washington is really dangerous," Bush said. "We need someone with a proven record in order to force consensus."

10:38 p.m. "On occasion, in order to highlight something, I use profanity," Trump said. Then he claims he was bleeped out for something that wasn't profanity.

10:31 p.m. "I think Nikki Haley will do a better job of curing poverty than Barack Obama," Rubio said.

10:29 p.m. "(Reagan) didn't tear down people like Donald Trump does. He tore down the Berlin Wall," Bush said.

10:26 p.m. Cruz said he likes Trump, but doesn't buy his idealistic flip-flops. "Flexibility is a good thing, but you shouldn't be flexible on core principles."

"You are probably worse than Jeb Bush," Trump responds. "This guy will say anything. He's a nasty guy. I now know why he doesn't have any endorsements from his colleagues."

With regard to appointing justices, Cruz says Trump will appoint liberals if he's president.

10:15 p.m. Cruz says he would be a warrior for the poor. "We need to lift the burdens on small businesses."

10:12 p.m. Kasich explains he's in favor of sealing the border and installing a guest worker program. He encourages giving people a path to legal status but not to citizenship.

10:08 p.m. Bush on how he'd approach immigration reform: "The great majority of people that come to this country come because they have no other choice."

"These are people who are coming to provide for their families and we should show a little more respect." -Bush

10:07 p.m. Rubio to Cruz: "I don't know how he knows what I said on Univision because he doesn't speak Spanish." Cruz then speaks Spanish.

10:04 p.m. According to Cruz, there are sharp differences on amnesty. He explains he led the fight to defeat the amnesty plan from Rubio and Sen. Chuck Schumer (D-NY).

"The wall will be paid for by Mexico. We are not being treated properly."

10:00 p.m. Back for second half of debate. Immigration will be the main focus going forward.

9:55 p.m. Carson brags about his tax plan being based on "fairness for everybody."

Carson adds his goal of eliminating Obamacare: "My main goal is to get rid of Obamacare."

9:51 p.m. Bush says Kasich wants to further Obamacare and has no desire to replace it.

9:50 p.m. According to Kasich, Ohio's credit is strong and is a model for the rest of the states.

9:49 p.m. Rubio wants a child tax credit so families could invest more in their family.

"Family formation is the most important institution in society."

9:45 p.m. Cruz explains his support for a flat tax and abolishment of the IRS.

9:44 p.m. According to Trump, economy is dying and workers are losing jobs. Trump on his specific plans for social security:

"You have tremendous waste, fraud, and abuse. That, we're taking care of."

9:43 p.m. Question to Trump: Can you deliver all your promises?

"The World Trade Center came down. He kept us safe? That's not safe." -Trump

Bush: "My dad is the greatest man alive in mind. While Donald Trump was building a reality TV show, my dad was building a security apparatus to keep us safe."

Bush: "My mom is the strongest person I know."

Trump: "She should be running."

Kasich: "I'll tell you, this is just crazy."

9:31 p.m. Donald Trump criticizes President George W. Bush for lying about there being weapons of mass destruction in Iraq.

"It took him five days before his people told him what to say and he ultimately said [the war in Iraq] was a mistake."

He says President George Bush made a mistake.

Trump also criticizes Sen. Lindsey Graham (R-S.C.) for failing at 0 percent in the polls. He then says audience members who are booing him are part of Bush's lobbyist support system.

"I only tell the truth, lobbyists."

9:25 p.m. Bush explains he would increase sanctions on Iran: "We are not going to allow for Iran to do what it's doing which is moving toward a nuclear weapon."

9:23 p.m. Kasich says United States needs to make it clear to Russia that violations will not be tolerated. "The world needs us and now we have the opportunity to form a coalition."

9:21 p.m. Carson jokes he is getting more opportunities for participation than usual.

"Thanks for including me in the debate. Two questions already, this is great."

9:17 p.m. ModeratorJohn Dickerson to Trump:What three questions do you ask to national security advisers on your first day in the Situation Room?

9:16 p.m. "We are one justice away from a Supreme Court that would undermine the religious liberty of millions of Americans." -Cruz

9:14 p.m. Moderator to Cruz: "I just want to get the facts straight for the audience. I apologize."

9:13 p.m. Bush says he would appoint someone with more judicial experience. "The president has every right to nominate Supreme Court justices."

9:11 p.m. Rubio praises Justice Antonin Scalia's career on the Supreme Court. "The Constitution is not a living and breathing document. It is supposed to be interpreted as it was originally meant."

“We should be thinking about how we’re going to get healing in this land.” -Carson

Kasich urges Obama to put country before politics and not move forward in picking a justice: "I really wish the president would think about not nominating somebody."

9:05 p.m. Candidates will have one minute for answers to questions and 30 seconds for responses.

9:02 p.m. Candidates take the stage and are introduced.