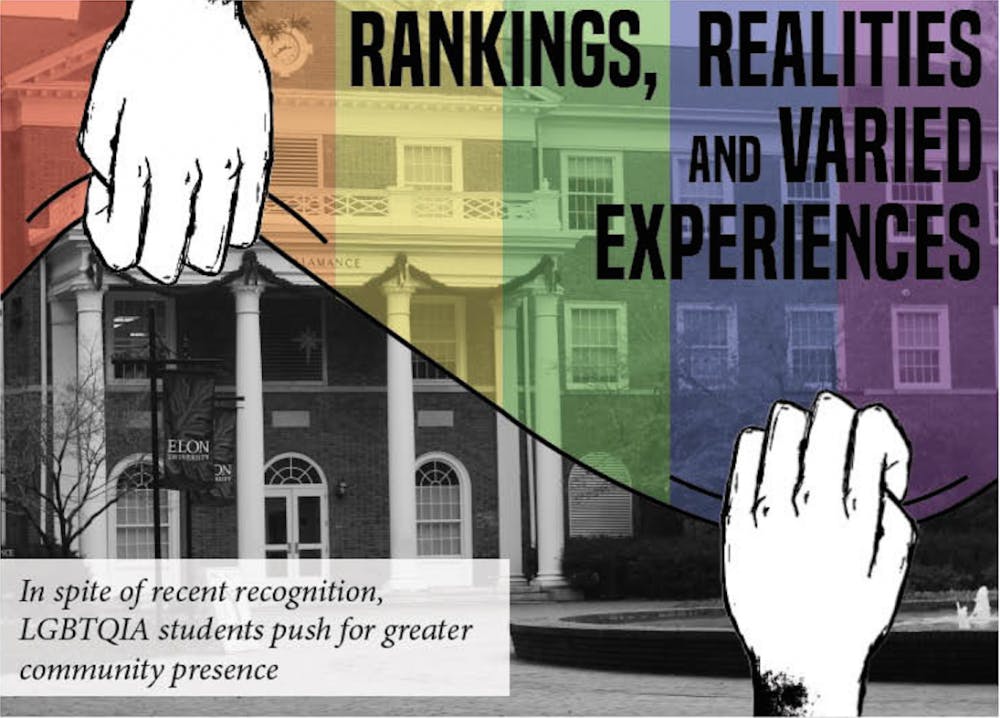 Before Elon University students broke for Thanksgiving, they received an email from President Leo Lambert condemning several reports of homophobic slurs directed at members of the community.

“It is understandable that this type of incident makes members of the LGBTQIA communities feel unsafe and unwelcome,” Lambert wrote in the email, “despite the good work of hundreds of people to support and value Elon’s LGBTQIA students and colleagues.”

According to Leigh-Anne Royster, director of inclusive community well-being at Elon, the slurs Lambert referred to were directed at Elon students, and authorities have not been able to identify all perpetrators. All reported incidents were investigated by the police when possible and responded to through the Student Life Emergency Response system and/or the ongoing Bias and Harassment Response system.

But still, Royster said this is not the first time her office has received reports addressing incidents faced by a member of the LGBTQIA communities at Elon.

“Each year, my office receives around 12-14 reports of bias and hate motivated by LGBTQIA bigotry,” she said.

The Executive Summary report released by the LGBTQIA Task Force in spring 2015 suggested that more go unreported than not.

The report cited a statistic captured by the Elon Diversity Climate Survey, which was administered by the Inclusive Community Council and sent to all students. It revealed that when students were asked to indicate if they had seen or experienced discrimination or disparaging remarks based on sexual orientation, to mark ‘yes’ (1) or ‘no’ (0), the mean for LGBTQIA students who said they had experienced discrimination from students was .56, or more than half.

The task force’s own LGBTQIA student survey found that students identifying as a member of the LGBTQIA communities at Elon rated the “overall campus climate” as 3.17, a neutral number on a five-point scale (where five was the highest).

Some members of the LGBTQIA community feel that while the university’s accomplishments in shaping inclusivity for students should be recognized, the institution should be more self-critical in its pursuit of becoming an “LGBTQIA-friendly” campus, particularly in light of recently reported incidents involving homophobic slurs directed at LGBTQIA students addressed in Lambert’s email.

Despite only being two years old, Elon’s Gender and LGBTQIA Center (GLC) has crossed off and celebrated numerous successes over the past two years.

With a checklist of accomplishments made possible by the intersections between various departments and authorities on campus — including Lavender Graduation (held annually since 2012), the ability to change gender markers on diplomas, more than 10 nationally acclaimed guest speakers on LGBTQIA rights, countless ally and leadership trainings and the installation of around 100 universal bathrooms, to name a few — the university proudly announced its catapult to a 4.5 ranking by Campus Pride Index for policy, programs and practice earlier this year.

Though the Campus Pride Index aids prospective students in their college selection process and helps institutions improve the LGBTQIA experience for their students, it’s still quite limited as an actual measure of campus climate.

By nature, the index, based on responses to a self-reported survey, can only measure clearly defined information — the presence of an LGBTQIA and Ally student organization or the option of gender-inclusive housing, for example. Additionally, not all institutions of higher education are even considered for inclusion in the ranking, just those that fill out the form and send it to Campus Pride for consideration.

The index doesn’t measure more nuanced, qualitative indicators of campus inclusivity, and the site itself warns that the Campus Pride Index is not and should not be used as “a replacement or substitute for campus climate research which examines more holistically campus attitudes/perceptions of LGBTQ and ally campus life.”

When senior Claire Lockard heard the news of Elon’s top 25 ranking, she said she was surprised — and then a little frustrated.

Lockard was a freshman during the Chik-fil-A controversy, which she said left her feeling really underserved as a queer student and disappointed in the university’s administration and her peers. Since then, Lockard said not much has changed in her experiences as a queer student.

Lockard added that student experiences depend on what main LGBTQIA issue the community was facing during a student’s time at Elon.

When asked about what part of the institutional memory she would carry, Lockard said she, in some ways, feels kind of sad about the climate for LGBTQIA communities at Elon.

Many students say that the general student body is accepting and inclusive of queer relationships, saying they feel comfortable with their identity on campus.

“I was never open in high school, but I came out of the closet when I was here. And I just kind of drop it sometimes on people, and they’re always like, ‘Cool. You do you,’” said junior Bella Mazzola. “I’ve had flings on campus where I’ve, you know, openly kissed girls or just walked around holding hands, and no one’s ever been rude about it.”

“No college campus is going to be a utopia,” Bosch said. “People are coming from all over with a variety of backgrounds and experiences.”

Love your school enough to change it

To Lockard, improving the climate for LGBTQIA students means taking a more self-critical approach in addressing issues facing the communities. She added that to love something, you have to be willing to talk about what’s wrong with it in a meaningful, engaged way.

“I would hope that Elon begins confronting its problems in a way that really addresses them rather than brushing them under a rug and hiding behind rankings,” Lockard said.

Bosch said he encourages students to be true and authentic in their experiences. He stressed that when problems arise, there’s a whole group of people who try really hard to make things better for students, faculty and staff.

The university, led by the GLC and the LGBTQIA leadership team, is now committed on implementing a three-year strategic plan for LGBTQIA inclusion. The plan involves four main areas concerning support, welcome, education and communication.

Royster said in her opinion, Elon is a place that is never satisfied with the progress made around inclusion.

“I don’t really like designations such as ‘LGBTQIA-friendly’ or other such rankings,” she said. “We don’t see those efforts as a destination — but a process. We will continue to invest in our process and support inclusion efforts in order to create the most diverse and inclusive learning environment possible for our community.”

Correction: The date of the first Lavender Graduation was originally reported as 2013 instead of the correct year of 2012. The Pendulum regrets this error.