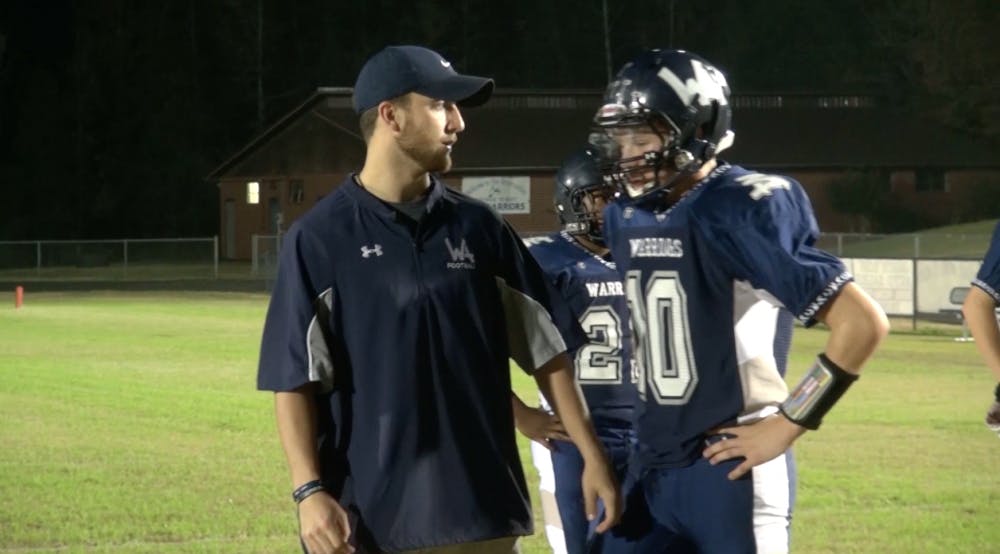 Three years removed from high school football, Elon junior Cole Hyman is still experiencing the thrill of Friday night lights. This time as a coach. When he's not in the classroom or working on his school work, Hyman spends his time as a volunteer quarterbacks coach for the Western Alamance High School junior varsity football team.

"I never really thought in my mind that, 'Hey, I'm going to coach high school football,'" he said.

Once upon a time, Hyman was the starting quarterback at his own high school, but once his playing days were over, he just couldn't be kept away from the sport he loved.

After discussing with a friend the possibility of coaching in the spring of his freshman year, Hyman reached out to the Warrior's head coach, Jeff Snuffer. The two met for a formal meeting and Hyman walked out with the job. A no-brainer for Snuffer.

"I was very impressed by him," he said. "He carries himself very maturely. Anybody that can help our kids, he's going to be a positive influence and I want that."

"[I told him] I'm here obviously to help your quarterbacks, but more importantly I want to be here just to meet some guys and get to know them better and be, if anything, a positive role model for them," Hyman said.

In addition to the 25 hours a week he puts in at practices and games, Hyman spends even more time with his players away from the gridiron, at his house or around the community.

"Just this past week I had like 12 guys over at my house to watch Monday Night Football between the Colts and the Panthers," he said. "We just had some Halloween candy leftover and we just watched the game, hung out... I'm just one of their friends and that's what I want to be."

And it's his involvement off the field that catches the coach's eyes.

"You can tell the guys flock to him," said Snuffer. "They like the guy there's something special about him. He's younger. I'm the older guy. He relates to them."

With one more season left before graduation, Hyman plans to stick around as long as he can. Coaching has not only changed the lives of his players, but his as well.