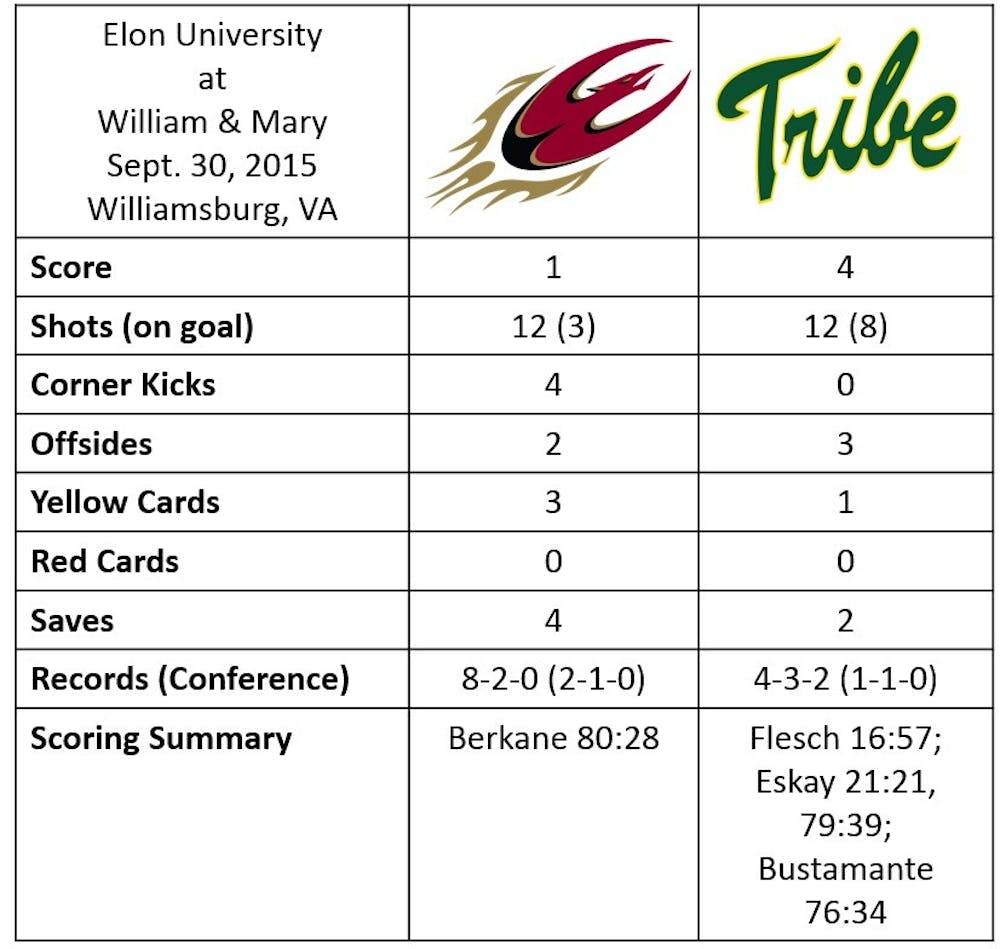 The Tribe dominated play for the majority of the first half. Redshirt freshman goalkeeper Matthew Jegier saved the first shot of the match in the sixth minute off the foot of the Tribe’s junior forward Reilly Maw.

The Tribe took the lead in the 17th minute, when senior midfielder Ryan Flesch’s free kick from just inside midfield made it through the crowded penalty box and bounced into the back of the net for his first goal of the season.

William & Mary struck again four minutes later, in the 21st minute. Senior forward Jackson Eskay received a pass from freshman midfielder Marcel Berry and buried the ball past Jegier from the top of the box.

The Phoenix had a chance to pull a goal back with its first shot in the 43rd minute, but freshman forward Jaiden Fortune’s header went wide of the target.

Elon looked to equalize from the onset of the second half. Sophomore midfielder Luis Argudo nearly scored in the 50th minute, but his effort went off the post. The Phoenix was protesting for a penalty kick after the fact, but the referee did not spot any infraction. Senior forward Cooper Vandermaas-Peeler had another chance in the 53rd minute, but couldn’t keep his close-range effort down as the ball sailed over.

Play was stopped in the 58th minute because of lightning in the area. After the delay, rain continued to pour down as hard as it did throughout the first portion of the match.

Senior defender Nathan Diehl had a chance of his own in the 63rd minute, as he made a run from the back. His shot took a deflection but swerved just wide of the right post.

The Phoenix had a golden chance to finally get on the board in the 66th minute. As Vandermaas-Peeler went for a ball along the goal line inside the box, Tribe redshirt junior goalkeeper Mac Phillips took out Vandermaas-Peeler’s legs trying to dive for the ball. Vandermaas-Peeler sent Phillips' the wrong way but hit the ensuing penalty kick over the bar.

William & Mary then put the match out of reach with a goal in the 77th minute. Freshman forward Antonio Bustamante scored his fifth goal of the year from outside the box to put the Tribe ahead 3-0. Eskay scored another for the Tribe in the 80th minute with a curling effort off the inside of the far post and in to make it 4-0.

The four-goal lead didn’t last long, as Berkane pulled one back for the Phoenix with his first career goal 49 seconds after Eskay’s strike. The Kelvedon, England, native linked up with fellow freshman Fortune to break up the shutout.

With the win, the Tribe improves to 4-3-2 and earns its first CAA victory of the year. The Phoenix drops to 8-2-0.