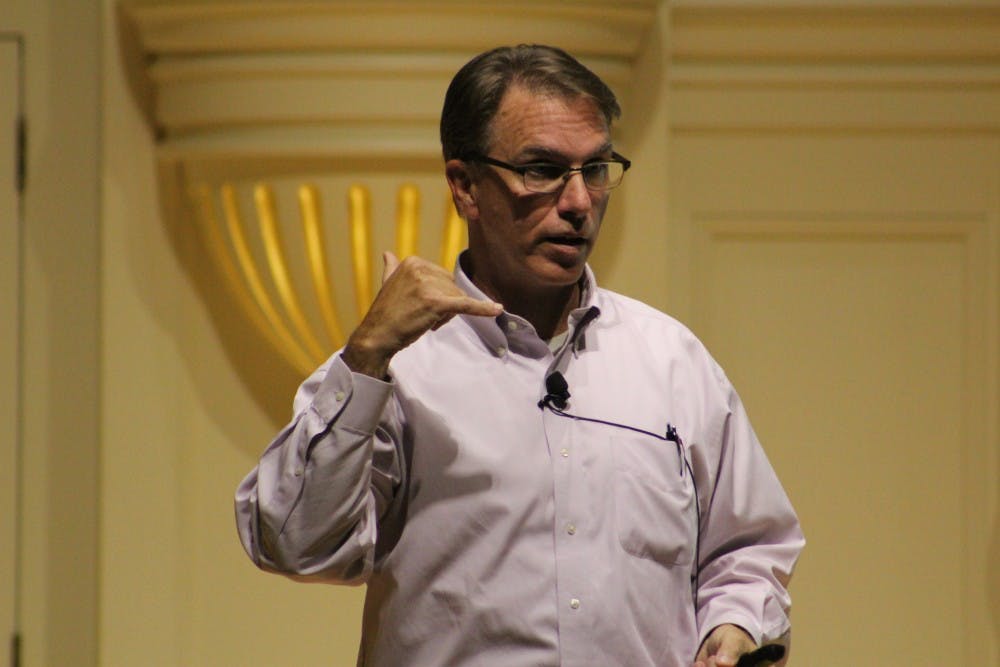 Three organizations came together to present inspirational speaker Dennis Gillan 7:30 p.m. Monday in Whitley Auditorium. The space was filled with students from different circles within Elon University, ranging from fraternity and sorority members to those interested in mental health.

Zeta Beta Tau, Alpha Omicron Pi and Active Minds hosted Gillan to talk about his struggles and the greater context of mental health in college.

Gillan opened his talk with a simple yet powerful statement.

“My name is Dennis Gillan, and suicide stinks,” he said.

This opening statement focused and silenced the audience. In the next 30 minutes, Gillan informed the audience about suicide prevention and mental health issues through personal experience, powerful statistics and, surprisingly enough, a little humor.

Gilllan began his presentation with the moment he found out his older brother had committed suicide. He was in college at the time and returned to West Virginia University soon after his brother’s death.

“I should’ve gone right over to the wellness center, checked myself in and said, ‘I’m a mess’ — because I was,” he said.

Gillan continued his speech by describing how he and his other brother had trouble dealing with their grief for many years. Eleven years after the death of his older brother, his younger brother committed suicide.

“This is a guy that I should’ve been looking out for,” Gillan said as he struggled to continue speaking.

Though the beginning of his speech was hard for Gillan to talk about and difficult for the audience to hear, the rest of the speech shifted to focus more on how to help others in difficult situations.

Gillan was a strong advocate of going to counseling and therapy, especially during college.

“You have these services at Elon,” he said. “And they’re free of charge. Walk in there — it’s not that bad.”

Gillan also suggested joining clubs and organizations and looking out for one another.

“If you’re in Greek system, great — if you’re in a club, awesome,” he said. “Just get involved in something here at Elon, because we aren’t designed to go through this thing called life alone.”

Throughout his life, Gillan has been able to work for the National Suicide Prevention Lifeline. He has used his intimate experiences with suicide to help those in crisis.

“There is healing through helping,” Gillan said.

As he continues to work with different groups, he has spoken at a myriad of events. Each time he emphasizes the importance of reaching out and getting help, he said.

At the end of his presentation, Gillan emphasized how important it is be cognizant of those around you.

“If something is off, you have to have a conversation with that person,” he said. “It’s hard, but you have to do it. 80 percent of people are affected by suicide. We’ve come a long way, but we still have to do better. Talking saves lives.”

Following his presentation, there was an open discussion hosted at the Zeta Beta Tau on-campus house. Students were encouraged to attend to continue the conversation about mental health, suicide prevention and Gillan’s story.