From Acorn to Disney World 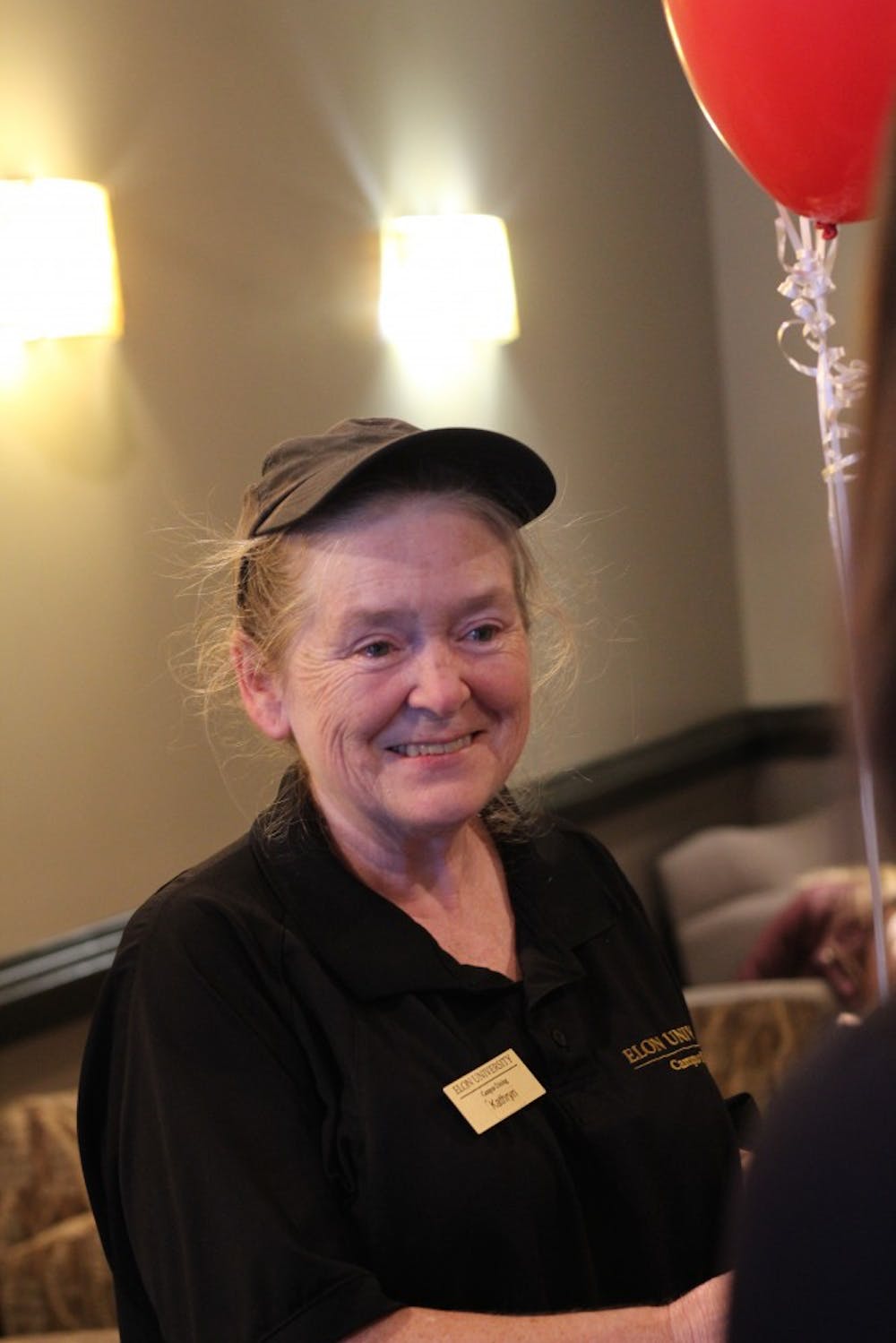 Before starting her shift Monday night, Acorn Coffee Shop employee Kathryn Thompson cried. Her dream had just come true — she would be finally able to take her family to Disney World.

After weeks of fundraising through a GoFundMe page, junior Taylor Zisholtz and freshman Lucy Smith-Williams revealed they had raised more than  $6,000 to fly Thompson and four of her family members to “the happiest place on earth.”

“It was really exciting,” Smith-Williams said. “Of course she’s really shocked, so she didn’t understand at first, but once we explained it to her, she was so surprised. It was everything we hoped for.”

Both sporting Mickey Mouse T-shirts, Zisholtz and Smith-Williams showed Thompson a sign with the words, “We wanted to thank you for all that you do… you and your family are going to DISNEY WORLD,” along with kind comments that were posted on the GoFundMe page.

"Are you serious?” Thompson asked through her tears as she was handed a bag of donated Disney shirts for her and her family. “It’s a dream come true. I love y’all.”

Zisholtz and Smith-Williams explained to her how they have been raising the money for the trip through donations from a GoFundMe page since September. All she needs to do is pick a date and pack her bags.

It has been Thompson’s dream to go to Disney World because she’s always wanted to take her autistic grandson to meet his favorite character, Mickey Mouse.

“I’m excited just to be going,” Thompson said. “To see my grandson’s eyes light up when he sees Mickey. I hope he won’t be scared of him.”

Thompson thanked and hugged Zisholtz and Smith-Williams as well as other students sitting in the coffee shop.

“She’s seen the community come together,” Smith-Williams said. “There are so many people who worked to make this happen. She’s going to be thrilled when she reads all the messages.”

Around 9 p.m. Friday, Sept. 11, Zisholtz was sitting in Acorn Coffee Shop, waiting for her sandwich. Since it was a slow evening, Thompson brought Zisholtz her food and immediately started a conversation with  the few people in the room.

Thompson asked Zisholtz and Smith-Williams, who was sitting by herself at a table across the room, where they were from, bridging the silence between the two.

“I think once we got talking with her, you could see how passionate and even just in the few seconds, you could see how warm she was,” Zisholtz said. “In a world where everybody is so cold, they keep their wishes and their feelings all to themselves. With Kathryn it was just an open door, she welcomes everyone in, and she works so hard.”

Though Thompson didn’t have much to say about Zisholtz’s hometown, a Philadelphia suburb, her eyes lit up when she heard Smith-Williams was from Florida. She fired out questions such as, “How long does it take to drive there?,” and “How much would it cost to take a family of five to Disney World?”

She revealed to the girls it was her dream to take her son, daughter-in-law and two grandsons to Disney World.

Thompson’s life is rooted at Elon — her parents graduated Elon in the 1950s, she lives across the street from her parents’ house and works five nights a week at Acorn, leaving at 2 a.m. after each shift.

“She’s been here for a long time,” said Glenn Austin, Acorn’s assistant location manager. “She’s dependable. She hardly ever calls off and is a stable employee for the night shift. I think it’s a wonderful surprise.”

Her dedication and heart inspired Zisholtz and Smith-Williams to do something. Though they were complete strangers at the time, the two quickly became partners-in-crime for the operation.

“I moved my stuff to Lucy’s table, and we were just brainstorming ideas because I looked at her and was like, ‘We’re doing this, we can do this, we have to do something,’” Zisholtz said.

The two researched how much it would cost to send five people to Disney, which came to around $6,000. This goal could be met if half of Elon’s student body donated $2 each. Though neither Zisholtz or Smith-Williams had made a GoFundMe before, they decided it would be the best platform for their cause.

Since GoFundMe takes 5 percent of the funds, they bumped the goal to $6,500.

“It’s one of the lowest packages, but it’s still a package,” Zisholtz said. “But they are still able to fly.”

The page was created Sept. 12. Within three days, half  the funds were raised.

Their plan was to have the money raised by the end of October so the family could go over Thanksgiving break. But they raised the funds much faster.

Zisholtz said everyone — not just the Elon community — shared the GoFundMe on Facebook and donated something, including John Jin from the GoFundMe Team, who donated $1,000.

“The response is incredible,” Zisholtz said. “We thought this would take over a month.”

Though there was some plateau after the first three days, Zisholtz continued reposting the GoFundMe page with different updates, comparing a donation to the price of an Acorn cookie, to keep the donations moving.

She also reached out to alumni via email to expand the cause. Zisholtz believes the campaign was so successful because of Thompson’s connection to the university.

“Everyone knows Acorn, everyone eats their cookies, everyone’s been there a million times,” Zisholtz said. “It’s Elon, it’s their school, it’s their stomping ground, it’s something they can link to and it’s doing good for someone, and who doesn’t like doing good?”

Throughout the fundraising operation both Zisholtz and Smith-Williams were worried the surprise would get out, which is why they avoided most media Thompson would have access to. They also spoke with Austin to ensure it would be kept secret.

“I was so nervous,” Smith-Williams said. “We were always trying to post that it was a surprise in our updates, so she wouldn’t know. But you never know what someone will say.”

Luckily, everyone kept quiet, leaving Thompson shocked at the reveal.

Now, Zisholtz and Smith-Williams just need to schedule the trip, but the dates are ultimately up to Thompson.

“It was everything we hoped for,” Zisholtz said. “We couldn’t have done it without the community. We have everything ready and we just need to stamp a date.”