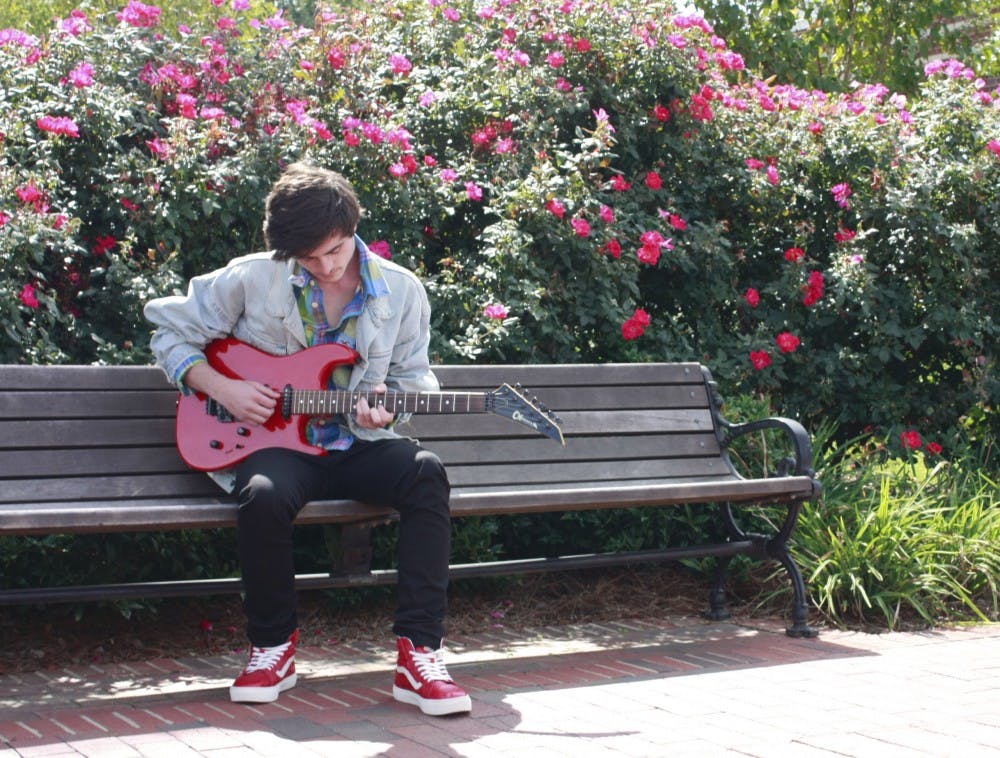 
Andrés Garreaud has been playing guitar since he was a child. MELINA CASADOS | Features Writer

Andrés Garreaud takes another step forward as he continues his hike up a New Hampshire mountain range. The year is 2013, and he is alone.

As he hikes, he finds himself at peace. This isn’t his first time hiking, but this journey is different. This time he has his guitar.

When he reaches the peak, he stops and looks out. The view reminds him that there is much to explore, pursue and accomplish. So he grabs his guitar, and he plays.

It was there, on the peak of a mountain, strumming with passion and singing his heart out, that Andrés realized what he was meant to do for the rest of his life.

Now a sophomore at Elon University, Andrés has not lost sight of his passion. As a music production major, his campus involvement includes Elon’s Electric Ensemble, Media Services and Taphouse — not to mention that he is about to release his first studio album.

“I was 18 when I realized I could create an album,” he said. “I amassed enough songs that I felt were of a worthy quality for an album, and decided that I wanted to record them.”

Andrés' love for music traces back to his childhood. He grew up in Los Angeles, where his father was a music producer and owned a recording studio. The early exposure to the music production process instilled a fascination within young Andrés. By the time he reached eighth grade, he could sing and play both piano and guitar.

“I just loved playing and jamming out,” he said. “I had a lot of fun, and it just kept escalating from there.”

With musical influences such as Muse, Bob Dylan and Led Zeppelin, Garreaud focuses on creating sounds that appropriately reflect his sense of individualism.

“My music is a combination of rock and blues, with elements of folk,” he said. “It’s a unique sound that I’m excited for people to hear.”

Although he admits balancing classes with his jobs and organizations can be difficult, he prefers a lifestyle in which his time is used productively. It has not proved to be an easy task, but the timing of his album release feels right. After much reflection on his growth over the past six years, his decision to create an album maximizes his creative potential.

“I really enjoy making music,” he said. “It’s cool to have a body of work anyone can listen to, from start to finish, and get a glimpse of what my life is like.”

His passion does not go unnoticed. Within Elon’s campus the music production major is comprised of students who focus on learning skills that will help perfect their craft. It’s a group of individuals that provides collaborations, feedback and support for one another. One of Andrés' peers, sophomore Kellcee Batchlor, feels fortunate to understand Andrés' musical process and motivations.

“He carries himself differently,” Kellcee said. “He has a different style about him. He’s a very conscientious individual, and he’s someone who cares.”

Kellcee also described Andrés as a visionary for his ability to be progressive with his sound as he envisions something bigger for the future of music.

Andrés acknowledges this creativity by identifying as an expressionist. He believes in showcasing character, whether it’s through music, art or fashion.

“When you reflect on your life, you want to have lived in a way that was fulfilling and enjoyable,” he said. “I want everybody to understand that they have the power to do whatever they want.”

But that's not to say Andrés has not faced his share of obstacles.

“The biggest obstacle is not losing the ambition,” he said. “It takes a lot of time and commitment, but it’s all worth it in the end.”

With his ultimate goal being to reach people with his music, Andrés understands that the best approach to his happiness is simply following his passion. He wants to influence people on a deeper level, so he creates music with meaningful messages.

“I see music and songwriting as an opportunity to communicate,” he said. “In those few minutes of a song, people are listening. They’re paying attention to you and what you have to say. Music is a platform to get your message out there.”

Andrés' journey as a musician has just begun, but he knows there is much to look forward to in the future. He remains optimistic by recognizing his self-worth and advises others to do the same.

“You have to know your own value and what you have to offer a musician,” he said. “That’s going to be more unique than what other people have. Just focus on yourself.”