From Ferguson to O’Kelly 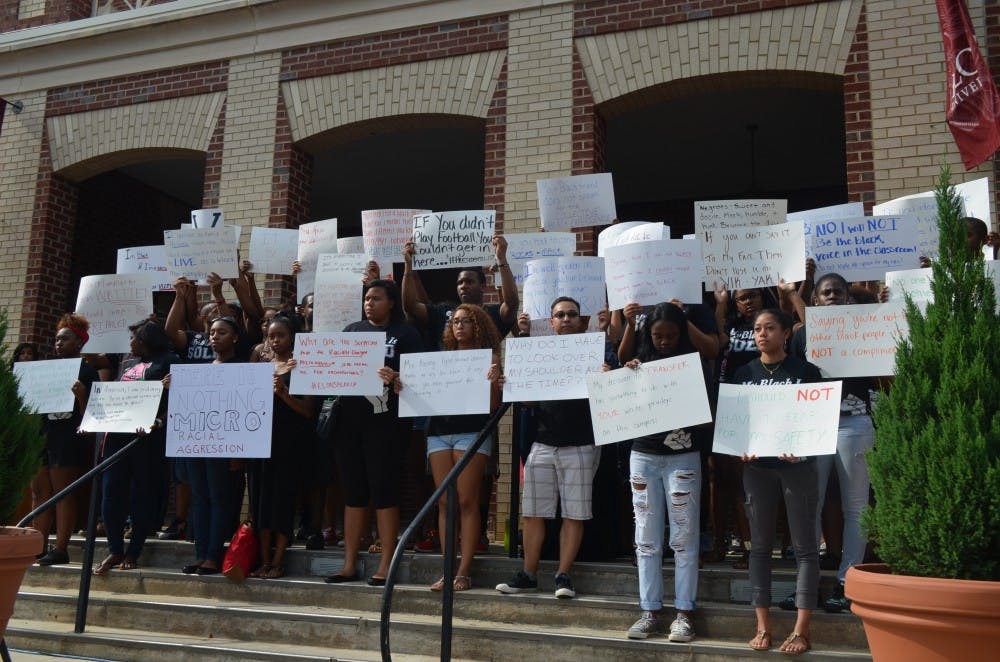 
Students gather at the front of Moseley Center to express their feelings toward the statement, "Black Lives Matter."

Elon University’s discussion of race for the 2014-15 academic year began in August with the national story of Ferguson and Michael Brown. It closed May 12 with a rally for respect and racial equality on its campus.

Racial activism was present on campus throughout the year. More than 200 people were a part of a “Hands Up, Don’t Shoot” group photo in August. A silent protest was staged for racial equality in December during the annual Luminaries celebration. The first part of Elon’s “The N-Word Forum,” an interactive discussion on the racial slur, was held April 30.

Recent incidents of racism both locally and nationally spurred marches, forums, vigils and speeches at Elon this year — but according to Associate Chaplain for Protestant Life Joel Harter, these times aren’t any different than the past.

“There have been a lot of discussions about race here recently, but I wouldn’t say this year has been any worse in terms of racism,” Harter said. “It’s just that now these incidents are getting more attention.”

There is an increased campus focus not just on the incidents, but also on the creation of university responses to the incidents.

The most recent occurrence of racial bias this year — including racial slurs directed toward a black student January 21 and another yelled from a moving car April 22 — marked the sixth reported racial slur in less than four years and built into the inception of the rally.

Minority students expressed concerns in April about the lack of response from the university in regards to these incidents of racism and the protests in Baltimore, according to Carla Fullwood, associate director for the Center for Race, Ethnicity and Diversity Education (CREDE).

“The Truitt Center started connecting with organizations like the SGA, Greek Life and the student body in general because of the undertone of racism here,” Fullwood said. “They were answering the question of, ‘What can we do?’”

Harter said the accumulation of reports of racial bias on campus created a need for an event that would end spring semester on a hopeful note. The Rally for Respect and Racial Equality, which took place May 10, was the event chosen.

“Our intent with the rally was to make it the first step in seeing a change in campus culture,” he said.

The rally was different than past campus events regarding racism, because it was a student body-led initiative to change the campus culture instead of something exclusive to campus organizations.

The response to the rally’s announcement was positive, according to SGA executive president Avery Steadman. But not all of those who supported it may go on to actively participate in campus conversations about race.

Steadman and Harter both agreed that the main hurdle for Elon in the eradication of discrimination is the lack of dedicated activism from the student body’s white majority.

“We need to challenge white students to be a part of these events,” Harter said. “A lot of people are being silent allies about these issues, but that’s not going to create change. Building relationships and crossing lines are really important for what we need to do.”

Freshman Giles Roll, who helped plan the rally, said he hopes it will create accomplices out of allies.

“In planning for the rally I’ve seen a lot of passion and frustration out of students,” he said. “We want this to open up an organic conversation for all students about race.”

While the topic of race at Elon hasn’t reached many direct conversations, one smartphone app is already buzzing with discussion about it

Conversations about Elon’s racial climate have already been happening through the anonymous social media app Yik Yak after phrases such as “Black Lives Matter” were written in chalk across the campus.

“A few people were confused about ‘Black Lives Matter’ and made posts about changing it to ‘All Lives Matter,’” Steadman said. “No one’s going to debate that all lives do matter, but that’s not the issue right now.”

Harter said several Yik Yak users posted smart responses to the ‘All Lives Matter’ discussion. He opened Elon’s May 5 Vigil for Baltimore by showing the posts on the app about “Black Lives Matter.”

“‘Black Lives Matter’ is a statement designed to draw attention to the inequalities that disproportionately affect black people,” one Elon-based Yik Yak post read. “It’s not to diminish the value of all lives.”

Besides addressing the Yik Yak discussion, the vigil’s purpose was to show solidarity to community members with family in Baltimore, according to Harter. It connected the national issue of Freddie Gray’s death to the feelings of the Elon community.

Earlier in the year, Elon responded to another instance of alleged police discrimination and the riots that formed as a result.

The beginning of the fall semester featured a panel discussion on police shooting an unarmed black man in Ferguson, Missouri, and a “Hands Up, Don’t Shoot” group photo.

The Ferguson panel featured five Elon faculty members who discussed the shooting and the reaction to protests in the city, as well as words from Ferguson native and Elon junior Mia Watkins.

“I feel like the Ferguson discussion was a great event, but honestly I don’t think the people who needed to be at the discussion were actually there,” Roll said. “There were a lot of similarly minded people there, and that discussion needs to happen more with those who aren’t going to any of these events.”

More awareness needs to be raised about future events discussing race, because many Elon students have not had the experience of being a minority, freshman Alonzo Cee said.

“I’d say people are unaware here because of all the privilege,” he said. “There are a lot of white kids here with a lot of money and privilege, and the money that they have creates an opportunity for racial disparity.”

Cee said more widespread events at Elon addressing the topic of race are necessary to improve the campus climate.

“I don’t want to use the word ignorance, but a lot of people here haven’t had the experiences we’ve had,” he said. “That’s why continued conversation is so important.”

The “Hands Up, Don’t Shoot” group photo was the opposite of the panel discussion, with few words and a focus on 200 students and faculty members making the same silent statement for a brief moment in time.

“In light of recent events in Ferguson, we would like to show that Elon does not tolerate social injustice, and that we are accepting of all races, gender and all types of sexual orientation,” said Alpha Phi Alpha chapter president Justin Pierce in an E-Net article about the photo. “We want to show our community that Elon is a place where we all belong.”

Looking ahead to the future

The Ferguson panel, group photo and Tuesday’s rally, along with other events focused on racial issues such as the April 30 N-Word Forum, show Elon is making an effort towards giving minority students a larger voice, Harter said. But many are wondering if these events can be improved.

“Elon still needs to erase the cultural ignorance that a lot of students still have,” said senior Clarisse Abayisenga. “It’s like two separate worlds here. There’s the white Elon, and then there’s the other Elon. They need to educate students about different cultures and openly accepting different people. Right now they still sweep things under the rug.”

Campus-wide discussions of race are difficult to create due to worries of sensitivity, Steadman said.

“Students here are so scared of stepping on each other’s toes or saying the wrong thing,” she said. “That’s putting us further behind. Elon as a whole needs to speak up about issues of race instead of avoiding the topic.”

Despite the lack of conversation, Harter said there are positives going forward for minority groups on campus, specifically with the growing role of CREDE in inclusion efforts.

“CREDE is a phenomenal resource,” he said. “They are doing great work here with organizing and helping out with these events. Programs like the N-Word forum have been happening all year. Students of color still feel like they’re not being heard, but what the CREDE is doing right now is exciting.”