Homeless and hopeful below the Alamance County poverty line 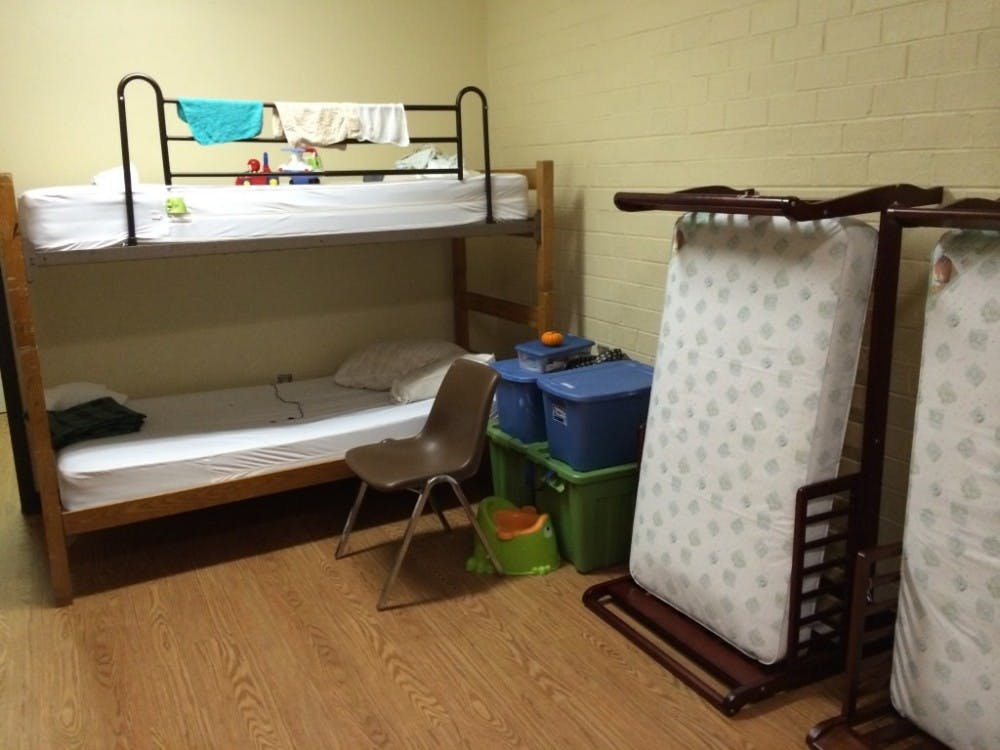 The human face of homelessness

“It’s been rough as far as our family because we can’t stay together in the building,” Vickers said.

She has a six-month-old baby girl, Allie, who she wants to raise in a safe environment, but unemployment has made that difficult.

“[Day to day], we apply for jobs and more or less try to keep her entertained and hopefully try to get out of there as soon as we can,” Vickers said. “It’s been a struggle.”

They don’t want to put their daughter in daycare, which makes the job search complicated because they’re trying to work around conflicting hours and shifts. Neither Vickers nor her husband has been able to find a job since her move to the area.

Vickers said living in the shelter has made a big impact. It’s been a challenge for the family emotionally and mentally, but having caseworkers and confidants they trust to help them access to resources has been beneficial.

“It’s completely different knowing that we’re there and having to raise a baby in our situation,” she said. “I’m glad she is as young as she is and not knowing what’s what right now.”

In addition to helping out with baby diapers, formula and clothes for their daughter, Allied churches has given the family comfort.

“Nowadays, you don’t know who’s doing what,” Vickers said. “And with their policies, I feel safe going there.”

She went from having administrative jobs where she was making $15 an hour in states all over the country to barely getting by with two part-time jobs.

Having worked in big cities like Nashville and Cincinnati, she says getting to her job is the hardest part because there’s no transit system. She has to walk almost four miles to and from work, and after a busy shift as a server, that is a long trip home at night.

“Yes I have to walk, but still have the option to find work,” Kettrey said. “It’s easier to get a job here, but harder to get there.”

Without enough income to get a place of her own, the shelter is her best option.

“It’s nice knowing that you have a place where you can sleep and have food,” she said. “It’s safe.”

For Kettrey, Allied Churches was more than just a resource to find work. It helped get her out of a dangerous home environment with a family that she described as having a “criminal mentality” she never really fit into.

“My family has been the opposite of helpful,” said Kettrey, who felt like it should be her family taking her in and getting her help. “It’s nice that there are organizations out there that do help when you don’t have family that’ll help you.”

Kettrey said the shelter means a lot to her, because without Allied Churches, she wouldn’t have the facilities for basic hygiene that most people take for granted.

“I don’t know where I’d be staying otherwise,” Kettrey said, “Probably down in the park or something.”

Now, she’s been able to start saving money to get her own place.

She moved to Alamance County from Kansas two years ago to be around her daughter. With so much experience, Abshier immediately got a job, but before getting promoted to manager at the new store, she sold alcohol to a customer five hours away from being 21, and as a result, lost it all.

“That line of work is over for me; I can never go back,” Abshier said. “And I’m too old to do anything else.”

Her caseworkers at Allied Churches told her she’s not too old and have her in a vocational rehabilitation program where she can learn a new trade and work again.

“If it hadn’t been for Allied Churches I don’t know what I’d do,” she said, who was living in her car before she heard about the shelter from her daughter.

When it comes to finding new work, Abshier only has one preference.

“I want to make enough money to survive,” she said, “Not paycheck to paycheck, but to live comfortably.”

That comfort has been tough to find at a shelter where there isn’t anywhere to be alone, which has been a daily struggle.

“You have no privacy,” she said. “But they give you a place to sleep, meals and a place to shower.”

Abshier said she hopes to be able to depend on just herself for those things again.

“When you’re doing well and you’re making it on your own, you don’t look at this side of the coin because you’re not around it,” she said.

Back in Kansas, she had a house and a new car, but Abshier said it’s become clear to her that there are always two sides to homelessness.

“You always look at a homeless shelter for the drunkards the addicts,” she said. “They’re there by choice. I’m not here by choice.”

Abshier said this is the lowest she’s ever been. And losing everything has left her without compassion towards those who are homeless by other avenues.

“You have compassion on them, but it’s not deep. You don’t put a lot into it,” Abshier said. “You don’t have to be the wine-o, the druggie, the prostitute to be homeless. It can happen to anybody at any time.”

Before he was homeless, Tate was living in Baltimore and earned a degree from Baltimore Community College with a 3.77 GPA. He moved to North Carolina with his late wife to be close to her family. She was diagnosed with cancer and died shortly after. Tate said once she died, her family turned against him and left him with nothing.

He had a five-bedroom house and two acres of land, and according to Tate, “they took it all from right under my feet.”

Tate said they saw him as an outsider and took him to court 12 times. When Straughan and Tate started seeing one another, Tate’s late wife’s family brought trespassing charges against her when she came to Tate’s house and Straughan was incarcerated.

When she was released, the couple stayed in a hotel while he was working at Subway. But then they ran out of money, so they resorted to sleeping in a Jeep.

“Homeless is living on the street, in a vehicle or under the bridge,” Tate said. “If we didn’t have the shelter, we’d be out in the elements.”

Tate is now working at a Sheetz distribution center, where he walks every day and is making minimum wage.

For Tate, minimum wage is better than making no money and because of that, he said he’s not going to miss a day of work.

“We came to the shelter because we didn’t have any other options,” he said, who spent about 60 days in the homeless shelter at Allied Churches.

Tate said nobody wants to live at a shelter, but it was the best decision they made because things immediately got better after.

“It’s all about having somebody believe in you,” he said. “If you come to the shelter, you have a fighting chance.”

With the help of the services at Allied Churches, Tate and Straughan recently moved out of the shelter and invested in permanent housing that they can really call home.