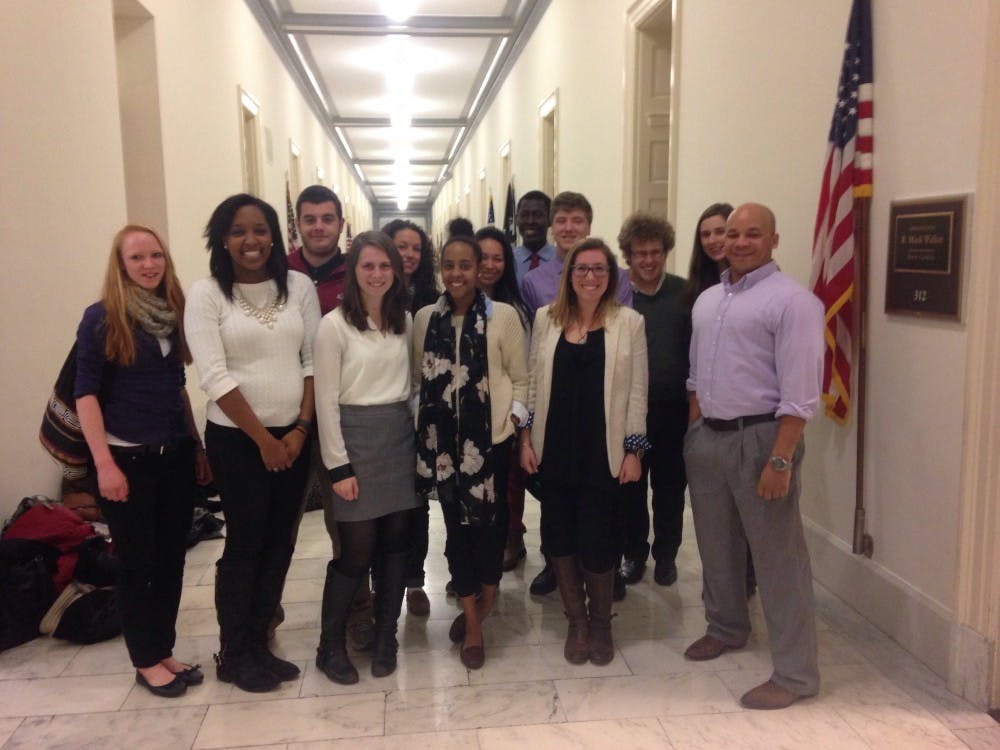 Corey Shegda participated in this Fake Break service trip through Elon Volunteers, and wrote about her experiences for Elon Local News.

Elon Volunteers sponsored a fake break service experience that allowed 10 Elon students and two staff members to travel to Washington, D.C. where they focused on homelessness and hunger awareness. Students had the opportunity to meet with the offices for Congressman Mark Walker, House Representative for the 6th District in North Carolina, and Thom Tillis, the recently elected U.S. Senate Representative for North Carolina.

The students had the opportunity to talk to each office about why they were in D.C, what they were doing and how they could enact change back in North Carolina. While the group was grateful for the opportunity to speak to the representatives, not all felt like it will help in the long run,

"The opportunity to meet with representative of our government was enlightening, to be able to talk to the people that could creat the policies and laws that can have an impact on the homeless population of america was a great opportunity, in theory. However, the partisanship of the representatives to gloss over the bigger issues and only think about funding logistics and policies that they have to enact overshadowed the true purpose of why we were there - to advocate for the voiceless, and to potentially help out those in need at a national level," said Ben Lutz, a sophomore at Elon.

When at the office of Congressman Walker, the group discussed what the Congressman could to help out with the big issues of homelessness and hunger around Elon and Alamance County. Dwayne Carson, legistlaive director for Walker, explained that in the next year and a half they plan on making a job fair for those who are unemployed. According to Carson, this fair would not only help find jobs for those people who are in need, but it would also teach them how to build a resume, how to interview, and other skills pertinent to getting a job.

According to Carson Congressman Walker said that change comes from churches, volunteer groups, and that it does not come from the government, but with people who have a passion to fix these issues. Most members of the service experience felt like it was nice to hear that Congressman Walker was passionate about these issues, but wish that they fully understood what was going on in their backyard,

"It was a great opportunity to meet and communicate with officials who hold the power to make social change. Although, I felt the government still lacks the understanding of the stereotypes against the oppressed communities," said Amber Gaither, a senior biology and exercise science double major.

Before attending both of these meetings students were taught that North Carolina in 47th in the country in rank in hunger and food insecurity. Also that Greensboro NC has the worst food security in the country; one in three children do not have a meal a day. In terms of the poverty rate, North Carolina is ranked number 40 in the nation. Sophomore Elisson Adrien is from Haiti, and hearing these numbers shocked him.

"I think for me talking about poverty in the U.S is something that is kinda odd for me, knowing that the U.S. is one of the biggest countries in the world it is odd. Now that I am in NC I am at Elon and you go to Elon and you go there it is one of the biggest and it is very pretty, and the people you see at Elon is not the people you would see outside of Elon," Adrien said. "It is shocking to know that there is this high poverty percentage. I am surprised by it. For me it should no be that many people who are in poverty. Especially cause at Elon I see how much food that is wasted in the dining halls. But personally I think that when I got the bad news it breaks my heart to know about where I am living and where I am living for a year a half and where I will be for the next two and a half years."

At the office of Senator Thom Tillis, the students got the opportunity to pitch specific ideas on how to fix this growing problem. They mentioned ideas that they need to fix the problem not by giving more money or clothes, but to start at the roots of the problem. But in additon to that they also talked about opening more food kitchens, safer homeless shelters, and making legislation that does not discriminate against people dealing with homelessness.