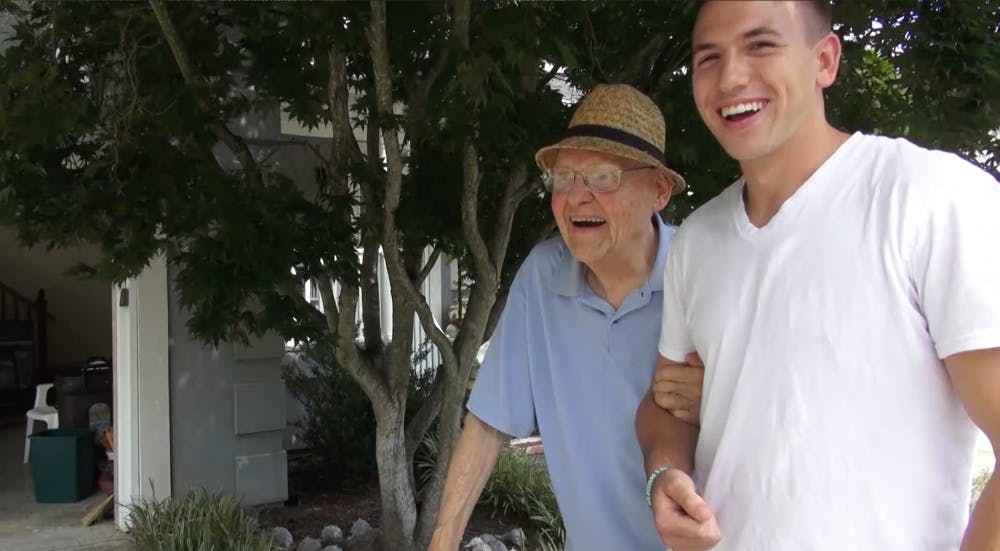 Living with someone new can be hard, especially in college; but there are two roommates in the Elon community who have a lot to bond over, and you may recognize them.

"I'll be here until Dr. D. gets sick of me and kicks me out of his house," said Jack Isenbarger, a former Elon basketball player.

As Dr. Danieley's newest house guest, Isenbarger plans to live with the former university president as he awaits a call to play professionally overseas. In the meantime, Isenbarger continues to train with Elon's team, and spends quality time with Dr. Danieley.

"I was by myself all the time, everyday, every night, and it's really not easy to handle," Danieley said.

2012 Elon graduate Evan Rey was looking for a place to stay upon graduation and Dr. Danieley opened up his home to Rey.

"I told him that I had two bedrooms, a bathroom upstairs. I don't go up there at all. He could have that if he wanted to. So, he moved in and stayed two years and became really quite a companion," Dr. Danieley said.

Rey worked at the local hospital in the emergency room while looking after Dr. Danieley.

"[He] took on some responsibilities as a caretaker and actually began to be a little bossy about what I should do and what I shouldn't do," Danieley said.

"I've slept in this house alone one night since way last spring. Always been somebody here. And the companionship is just so nice," Danieley said.

"We would always see Dr. Danieley at the basketball games and got to know him through that, so he reached out and has been so kind and good to us," Isenbarger said.

Now that they are living under the same roof, Isenbarger gets to know Dr. Danieley even better by sharing many meals out together, cooking lessons and gardening.

"I like to think we have a good time, going out to eat, and hanging out in the kitchen talking, making food, cooking with him. It's just a lot of fun. He has great stories and a lot of wisdom. Roger and I can learn a lot from Dr. Danieley, which is what we enjoy doing," Isenbarger said.

Dr. Danieley has already provided Isenbarger with a wealth of advice.

"We got to go out and cut off the old roses that were starting to fade and he showed me right where to cut them perfectly so you'd get another blossom, you know, so the plant doesn't die out. Just small things like that make your day," Isenbarger said.

Isenbarger shared a few pieces of advice Dr. Danieley has given him in the past few months.

"He's even given me some love and romance advice, so he's got a lot of wisdom in there, so don't let him fool you. He's a ladies' man," Isenbarger said. "One thing I believe his father told him, to not wait until you have money to have a woman to fall in love, to move forward. I thought that was a great piece of advice. Kind of follow your heart. Dr. D certainly has a big heart."

Dr. Danieley admits that he has delved into his house guests' love lives.

"Of course, I realize that I have to share the boys with their girlfriends. And I realize that the love is coming on and all of that stuff. And I watch that with some interest and you know, occasionally, I tell them what to do and what not to do," Danieley said.

With that guidance, Dr. Danieley has taken on a father-figure role.

"I really don't hesitate to call them my boys. I don't know what they think about that, but that's the way I talk; they're part of the family. The extended family," he said.

As part of the family, both Dugas and Isenbarger have errands they attend to.

"I don't mind that they wash dishes. Roger brings in my papers in the morning. They do lots of little things around," he said.

In Isenbarger's case, one of these errands includes acting as Dr. Danieley's chauffer.

"He does take me places and one of the nice things about that is that if we get somewhere and there's not a parking place close, he drives me to the door and parks. My driver is parking the car. It's very nice. He doesn't mind and I'm very glad," Danieley said.

Isenbarger said he's willing to help Dr. Danieley in anyway that he can, and is sad for the day when he will have to leave.

"He's really like a grandfather to me. He's so full of joy and love and he's just a genuine man and that's what I'm going to miss the most, the conversations and the time with him," Isenbarger said.