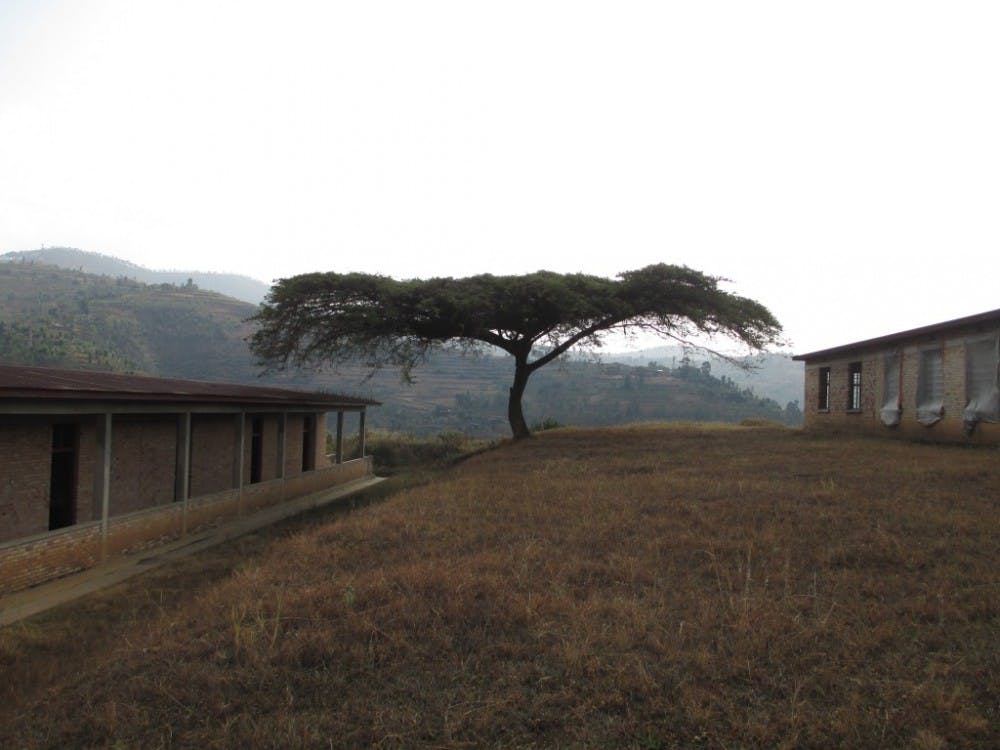 Genocide isn’t something Elon University students think about very often. It’s something that happens in far away places to other people but not to us.

The first time I truly learned about genocide was during The Global Experience class my freshman year. We studied several genocides that have taken place in the last century but none resonated with me as immensely as the one that took place in Rwanda in 1994.

After the class’s conclusion I continued to study the events that killed hundreds of thousands of Rwandans and what caused the international community to do nothing to prevent the atrocity.

This past summer I had the incredible opportunity to intern with the US Embassy in Kigali, Rwanda.

Known as the “Land of a Thousand Hills,” Rwanda is covered by rolling mountains and dotted with pristine blue lakes. Tourists flock the country to visit its lowland gorillas and lush rainforests. But its natural beauty is scarred by its violent past. Throughout the summer I visited numerous genocide memorials, often at the site of a mass grave next to a church or a school.

One of them is a church in Nyamata where over 5,000 Rwandans sought refuge from the killers, believing they’d be safe at a sacred place of worship.

Today, the church pews are still covered with the clothing of the victims who were killed when the killing squads stormed the church walls with grenades, machine guns, and machetes. Beside the church, one can descend to a catacomb-like basement filled with the skeletons of 5,000 people.

At a nearby church in Ntarama, the interahamwe allegedly separated the children from the adults giving hope that the children may be spared. However, these children were brought to an adjacent chapel where each child’s head was smashed into a wall by holding onto their legs and swinging. The brick wall of the chapel is still stained from the blood of these children.

Stories like this are far too common throughout Rwanda. Fortunately, these stories are being preserved at genocide memorials and museums. They will hopefully inspire us to prevent this from happening ever again.

This year marks the 20th anniversary of the Rwandan genocide. It’s an opportunity for us to reflect upon the nightmare that engulfed a small African country from April 7, 1994 through July 15, 1994 as the international community merely observed.

In 100 days, more than 800,000 people were slaughtered for being associated with the Tutsi ethnic group. Organized by Hutu-led government officials, killing squads of local militias went from house to house murdering anybody with a Tutsi identity card along with moderate Hutus affiliated with the Tutsis.

Armed with machetes, spears and knives, these killing squads known as interahamwe left paths of destruction throughout the country, massacring Tutsi children in their schools and ambushing entire communities seeking refuge in Catholic churches. The elderly were killed in hospitals and mothers were raped in front of their children. The interahamwe showed no mercy.

These horrific events are difficult to wrap one’s minds around, especially while conceptualizing the number of people who died in such a short time frame. At the peak of the Rwandan genocide, nearly 8,000 people were killed every day.

The death toll was equivalent to nearly one and a half times Elon’s student body dying every day for 100 straight days. For a better visualization, Rhodes Stadium held 9,256 people on Homecoming last November. It would take more than 86 Rhodes Stadiums filled to capacity to approach the death toll of 800,000 people.

Beyond all the deaths, hundreds of thousands of survivors continue to carry traumatic images of streets lined with corpses, women being raped, pickup trucks filled with missing limbs, and other memories of horrific forms of violence. While Rwandans were experiencing a living nightmare, the international community merely watched. The United Nations deployed a poorly staffed and resourced observer mission to monitor the atrocities, but nobody was willing to end the crisis.

In retrospect, it’s easy to look back and say something more should have been done. It’s easy to justify international inaction by blaming the United Nations, accusing complicated international politics or citing a lack of U.S. political interest in a small country in central Africa. However, the blame for genocide ultimately lies on every single one of us.

With all of the technology connecting people all over the world and nonstop media coverage that keeps us updated with major events and crises, it’s not hard to be numbed from distant tragedies. We become bystanders to injustice and violence as a result of an overwhelming influx of information and images.

Twenty years ago the interahamwe came for the Tutsis, and barely anybody noticed until nearly a million people had been killed.

Throughout the tragedy,  stories emerged of heroes facing evil and saving lives.

Carl Wilkens, an American, was serving in Rwanda as a missionary when he was ordered to evacuate with all other foreigners and flee the violence. He instead remained with his Tutsi coworkers and friends in Rwanda throughout the genocide, saving countless lives by relentlessly negotiating with genocidaires and seeking provisions for the injured.

General Romeo Dallaire, force commander of the U.N. Assistance Mission for Rwanda, refused to abandon his mission under any circumstances and eventually convinced the U.N. to deploy a larger force by July.

Not only did his role as an observer to the genocide allow the world to see the mass violence as it occurred, but his troops’ mere presence also prevented interahamwe from killing more civilians.

Imaculee Ilibagiz, author of  “Left to Tell: Discovering God Amidst the Rwandan Holocaust,” was a teenager when the genocide began and was forced to hide in a tiny bathroom along with three other women for nearly three months to avoid imminent rape and murder.

A local priest risked his own life to save Ilibagiz and the other women by concealing their existence in his home until the genocide ended.

Among all of the evil, many people courageously displayed small acts of love and compassion that saved thousands of lives and provided hope for the survivors.

This week is a national week of mourning and reflection in Rwanda. A flame of remembrance carried by young people will make a nationwide tour throughout the country with memorial ceremonies held at its many genocide memorials.

Although we are thousands of miles away from Rwanda, we must also take a moment to remember the innocent civilians who lost their lives as well as the survivors burdened with rebuilding a devastated country.

After the Holocaust, the United States proclaimed that it would “never again” allow another genocide. Twenty years after the international community ignored Rwanda we must reflect upon how we are fulfilling that promise today.

A common poem found in genocide memorials throughout Rwanda translated from Kinyarwanda says, “If you only knew me; If you only knew yourself; You wouldn’t have killed them.” Although people identify each other in categories such as Tutsi, Hutu, man, woman, Christian, Jewish, Muslim, straight, gay, rich, poor and thousands of other identities, we must remember that we are all people first.

While a tragedy as drastic as genocide may not be something we can relate to at Elon, its anniversary is an opportunity for us to remember the importance of viewing others without judgment. I hope we can learn to stand up to evil on a daily basis in our community. §