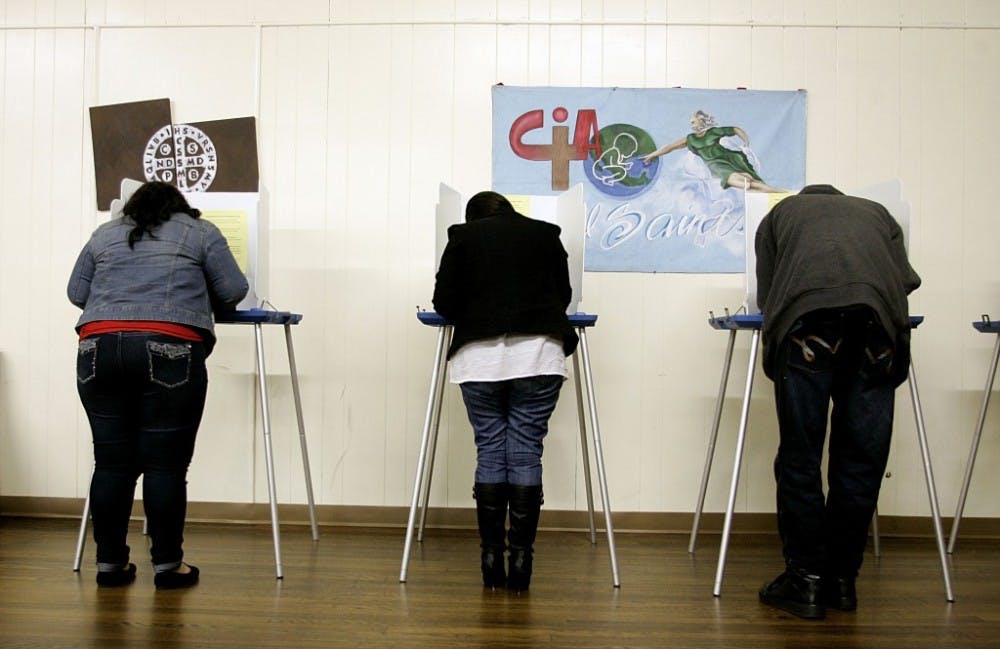 With new restrictions on voting, Elon students who used to vote as North Carolinians would now need to prove in-state residency and Elon University ID would not be acceptable. Photo courtesy of MCT Campus.

Junior political science major Niki Molinaro has voted in every election since she came to Elon University. But new North Carolina voter identification laws may keep her out of the voting booth.

Although she considers Elon her home, Molinaro, an official New York resident, must present a North Carolina identification card at the polls if she wants to continue voting in North Carolina.

The bill, passed August 2013, does more than require voters to show a government-issued ID at the polls. It also shortens the voting period by one week and ends same-day voter registration.

This is particularly a problem for university students who use their college ID cards as a form of identification at the polls. Beginning in 2016, they will no longer be considered acceptable.

“I think the new law is meant to keep certain groups of people out of the elections,” Molinaro said.

Republican officials in the North Carolina General Assembly argue that voter identification laws are structured to combat voter fraud and save the state money by shortening the voting period.

An Elon University Poll conducted November 2013 showed 65 percent of North Carolinian voters supported the requirement of government-issued identification at the polling precincts. Among Republicans, 96 percent are in favor of voter ID, but only 36 percent of Democrats support the requirement.

Elon political science professor Kenneth Fernandez said any number of circumstances, including requirement of ID, could deter people from voting.

“Even the tiniest barrier to voting will affect voter turnout,” he said. “So we think that making it difficult to vote is going to have an impact, especially on younger people.”

Fernandez said most older and middle-aged people often vote in many elections in a row, having established a routine and level of comfort in their voting duty.

Students from out of state will feel a deeper impact, Fernandez said. Although North Carolina state law allows people from outside the state to get a free North Carolina ID card, the process of obtaining one is a barrier in itself — particularly for students.

“You have to go to the DMV to get one, which is a hassle. But [getting an ID card] also means that you are a resident of North Carolina, so if you have a vehicle, you have to register it,” Fernandez said.

But North Carolina’s voter ID laws have the potential to increase voter turnout, according to Fernandez. He said creating barriers could motivate people to vote more than they would ordinarily want to.

“By putting barriers in front of people, you actually make it a salient issue,” he said. “People are debating about voting and who should vote. It makes people think about it. It reminds them to register to vote.”

Fernandez said voter ID laws might decrease voter turnout initially. But in the long run, he said, they will stimulate voter turnout by drawing attention to issues of voting rights.

For Elon students from out of state, Fernandez recommended using an absentee ballot through organizations like TurboVote.

“If you want to vote, you can vote,” he said. “What political science has found — and people hate when I say this — is that the probability of your one vote making a difference is pretty small.”

Fernandez said most people who do vote in elections believe voting is their civic responsibility. Only 50 percent of eligible voters actually turn out to vote in elections. With voter ID laws, minority voters among this 50 percent will face additional challenges because obtaining an acceptable form of identification is more difficult.

These are challenges former North Carolina Senator Ellie Kinnaird fought to reduce during her time in office. She resigned shortly after the signing of the voter ID law.

When Kinnaird took office in 1997, the senate had a large margin of Democrats.

“I was feeling that this was a pretty good place. I could do a lot of things that I wanted to,” Kinnaird said.

When Democrats became marginalized in the Senate, she said, much of the legislation she worked to enact was overturned.

“Last year really did away with all of my [legislation enacted]. I was thinking ‘I’m not very effective here,’” Kinnaird said.

Since her resignation, Kinnaird has teamed up with Democracy North Carolina to work on The NC Voter Project, aiming to register as many people to vote in North Carolina as possible.

Kinnaird has found people are eager to protect their voting rights. She said that students are largely affected because the law removes same-day registration for voting.

“Students aren’t paying much attention because they’re very involved in papers and exams, and all of a sudden, the election is upon them, and they haven’t registered to vote 25 days before,” she said. “That means that a lot fewer students are going to be able to access the elections.”

Molinaro suggested the right to vote is a cornerstone of America’s democracy.

“It’s one of the greatest gifts we have as United States citizens — that we have the ability to affect the way our government represents us,” she said.

The votes of the younger demographic have been considered a dividing factor in recent presidential elections. In 2008, Barack Obama received 60 percent of the vote from people under 30 — 24 points higher than Mitt Romney — according to the Pew Research Center. Even so, 77 percent of people nationally favored voter ID requirements in a study done in 2012.

The study found that one-third of young voters identified their political views as liberal, while 41 percent said were moderate and 37 percent said they were conservative.

Molinaro plans to take her vote to the North Carolina polls in 2016, even though she voted in her home state in 2012.

“It’s important to stay up on the issues and to know what you’re voting for,” she said. “I’d vote in North Carolina because it’s a swing state, so it’s a more important vote.”