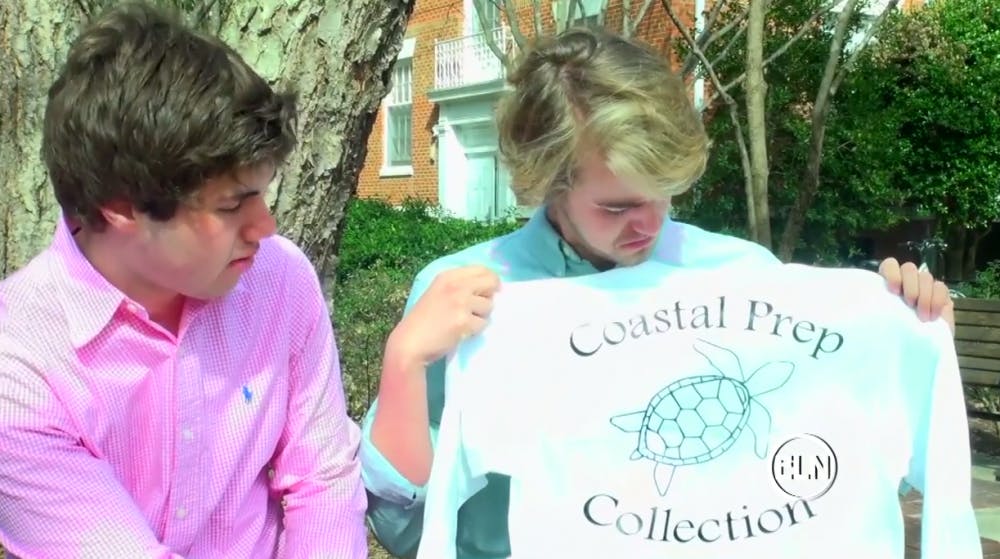 As the "buy local" movement grows nationwide, many people make an effort to support local businesses. Now the Elon community has an opportunity to do so right on campus. Three freshman business majors and hallmates created a new clothing company last fall, and they say it's thriving.

Griffin Wolno, Tyler Britt and Ben Kleiman created the company Coastal Prep Collection only a few months after meeting on the third floor of Smith. The trio say many students at Elon dress in a preppy style, and they saw this as a business opportunity.

"We decided that the preppy clothing companies just charge so much, and we just wanted to have affordable clothing that kids could buy," Wolno said.

They said the company was inspired by bigger, established companies that target a preppy collegiate clientele, such as Vineyard Vines, Southern Marsh or Southern Tide. While t-shirts from those brands often cost more than $40 or $50, Coastal Prep Collection currently offers a short-sleeved t-shirt for $15 and a long-sleeved shirt for $20. They said they hope students come to see their clothing as an alternative to more expensive lines.

The company began as just a vision but has now evolved into a full independent business. Britt said it was not long before their dream became a reality.

"It came to a point where we thought, 'Well, we can actually do this, and we might actually want to do this, and it would be fun,'" Britt said. "So we just kind of pulled the trigger."

The company has only purchased one order of about 120 shirts from its supplier. The group says they were frugal with the first order, but they have sold about half of their first order and have decided to expand. Customers can expect more shirts on the way, and hats will soon be added to the line.

Despite the success several months into the process, the group says it has not always been smooth sailing.

"There was some doubt, because everybody says clothing is not a good industry, and we have lots of competitors that are really established," Britt said. "But I think everybody was really encouraging, and they said as long as we don't get in too deep, everybody's been pretty impressed with how we've done it so far, especially as freshman college students."

Britt added that beginning the company as freshmen has actually been an advantage.

"A lot of people when they have ideas of companies with their college friends to start, it's a little later in their college career, and they're under more of a time crunch," he said. "But I think the beauty for us is it's not even the end of our freshman year and we're already getting started. And we've made a lot of progress and we've got a good base set up coming into next year."

They agreed that this momentum will give them an edge in the success of the company and the business world.

"We put in a lot, a lot of work for this company, and now that we can see our work paying off, it's a relief," Kleiman said. "And it's a benchmark for us."

The group is already looking ahead to the future.

"Being a business major, I can see myself hopefully starting up another company in the future," Wolno said. "And having this experience with these two guys has been a great learning experience and making great friends along the way."

The Coastal Prep crew said customers can order merchandise from the company's website and give feedback on their producers on its Facebook page.