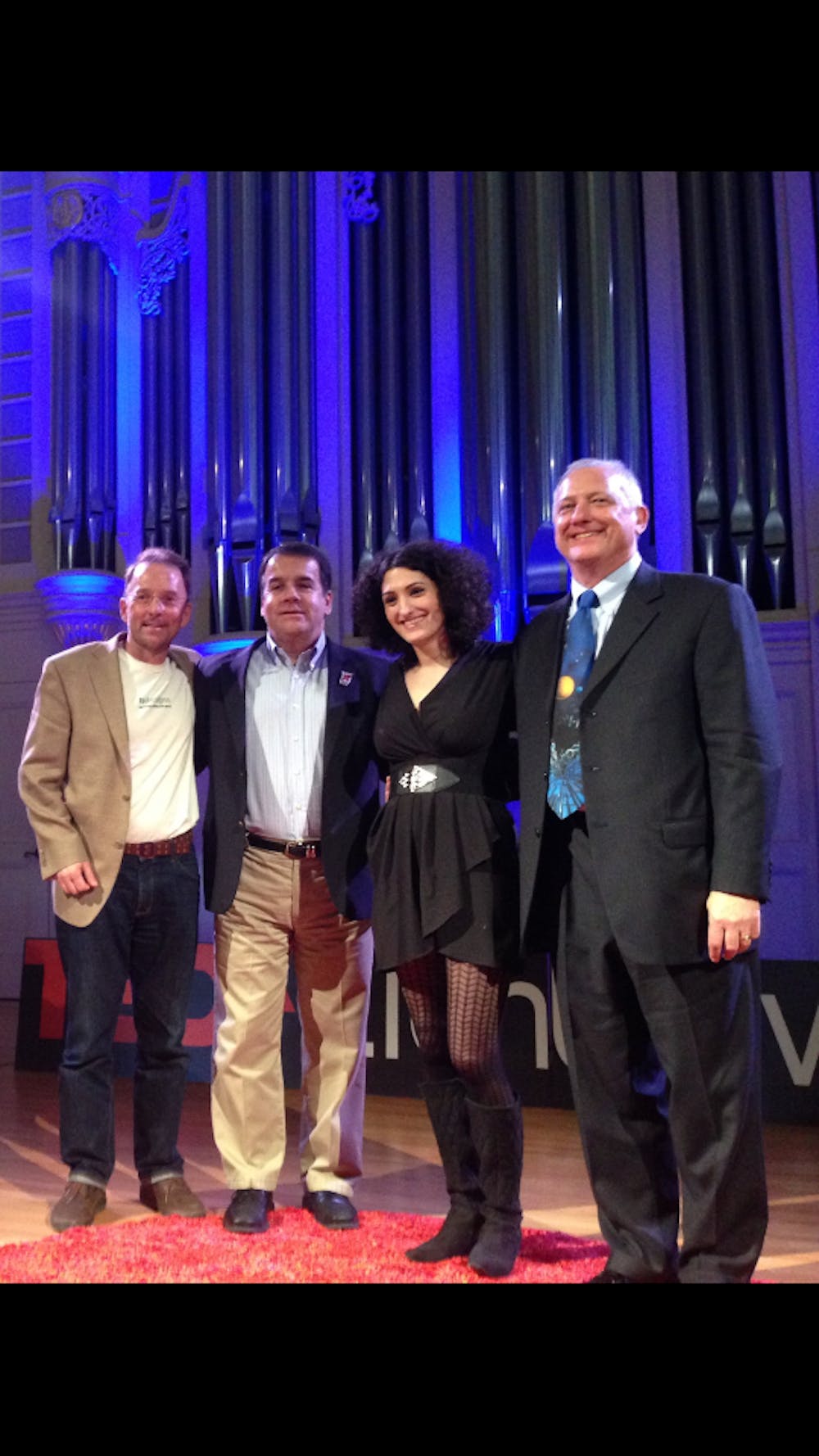 In the spirit of "ideas worth spreading," Elon University hosted a TEDx event Saturday afternoon.

The event was completely student organized, student run and student led. Senior Carolina Howland said she came to Elon Associate Professor Anthony Hatcher a year and a half ago with an event idea that would appeal to Elon's "remarkably curious, intellectual and passionate students."

It was the spring of 2013 when Howland and fellow Senior Kirsten Hughes began organizing for the event. The team spoke to several classrooms around campus. From the business center to the communications' school to the science buildings, they broadly advertised in hopes of gaining interest for the TEDx event.

"[We had] hopes of reaching a broad range of students with a bunch of different ideas," said Howland.

TEDx is one of many branch offs of the non-profit TED Conference. TED (Technology, Entertainment and Design) started in 1984 with one central goal - spreading ideas.

According to their About Us webpage, "TED conferences bring together the world's most fascinating thinkers and doers, who are challenged to give the talk of their lives (in 18 minutes or less)."

The TED event hosted at Elon was composed of four speakers and two TED videos.

Leanne Gluck: From Maker to Change-maker

Leanne Gluck, director of Social Impact at 3D Systems Corp., was the first speaker. Her speech titled, "From Maker to Change-maker" was focused on the global innovations of 3D printing and its ultimate initiative in empowering customers to manufacture the future.

Gluck concluded her speech with the story of a woman paralyzed from the waist down and given the ability to walk again due to 3D printing and scanning. She later pointed to her bracelet that was completely 3D printed as a live example of its capabilities.

Gluck has a B.A. in Cross Cultural Communications from Baruch College and an MBA with a focus on social enterprise and global sustainability from Ohio State University.

The human body's unrestrained exploitation to harmful radiation is one of the challenges that prevent the possibility of deep space exploration. Shorter exposure time and shields are the way to solve the radiation problem, and that's what the ASRG project is about.

"We need to solve that problem," Rusick said, "We need to figure out how to protect ourselves from such radiation."

He concluded his speech with an appeal to every generation.

"The main thing we need to do is demonstrate that something that gives us the capabilities of moving forward. We are asking everyone, K-12, college students to bring ideas."

Assistant Professor at Duke University and Director of Microbiology Strategy at ViiV Healthcare, Jim F. Demarest, was the third speaker.

His speech titled, "Putting Innovation into Practice: Advancing the treatment of HIV/AIDS until there is a cure" explained how Human Immunodeficiency Virus (HIV) works on a cellular level and how he and his team are working to not only treat it, but possibly cure it.

Over 35 million people are living with HIV today, and last year over 1.5 million deaths were attributed to disease caused by HIV.

"Concerning cases that we know of," Demarest said, "about 36 million people have been killed by a result of infection by HIV."

"HIV is the leading cause of infectious disease related deaths - globally."

No one drug can control the virus alone because it can become resistant very quickly, as well as rapidly transfer itself from one cell to another, ultimately "becoming one" with the infected person's DNA. A combination of medications (often times three different drugs), are used to slow down the virus' spreading.

This too, as Demarest said, can leave a psychological effect on the infected person. The daily routine of taking several drugs undoubtedly reminds the person of their helplessness.

He later showed his team's detailed "roadmap to a cure" by pointing at a blank screen.

But one man keeps his unfounded hope alive.

Demarest's speech concluded with the story of the 'Berlin Patient', Timothy Brown, who's the only person in all of history that's been completely cured of HIV. Being completely off of medication and therapy with no signs of relapse, Brown is living today as someone who was once HIV positive, and is now HIV negative.

The complexities of HIV cure research, although discouraging, are being understood more and more every day by researchers who work together.

"We understand now that 'cure' is not [merely] a four-letter word anymore. How do we get there? How do work together? Public and private groups are essential to pulling this off."

President of TS Designs in Burlington, Eric Henry, was the last speaker at the TEDx Conference.

His speech titled, "98% (the percentage of clothes we buy made overseas)" stressed the high percentage of apparel industry shipped overseas and how it negatively affects people, both domestic and foreign.

Henry started his speech by posing the question: "How do we get it back?" And lays the blame at the feet of NAFTA (North American Free Trade Agreement).

He showed negative examples of exporting labor, one being the tragedy of the Bangladesh factory in April of 2013. Amidst terrible working conditions (including sanitary and building code violations), cheap labor is constantly valued more than the lives of others, especially in the global apparel industry.

Over a thousand people died, and two thousand were injured. The workers in this factory were paid 26 cents per hour, and relatives were paid a mere $700 in death benefits if they could prove a family member died in the crash.

"We run around the world chasing cheap labor so we [can] benefit from it," Henry said. "We have a broken apparel system."

He then explained how his business worked, how disasters like this can be prevented and how the lack of domestic jobs can be turned around.

His apparel company is composed of a small group of people, from cotton farmers to designers - all within North Carolina. Keeping business within the nation is what he considers the first step in increasing jobs and spreading social change.

The TEDx Conference concluded with a reception in the parlor of West Residence Hall.

More information on the next annual TEDx Conference in Elon will be available soon.