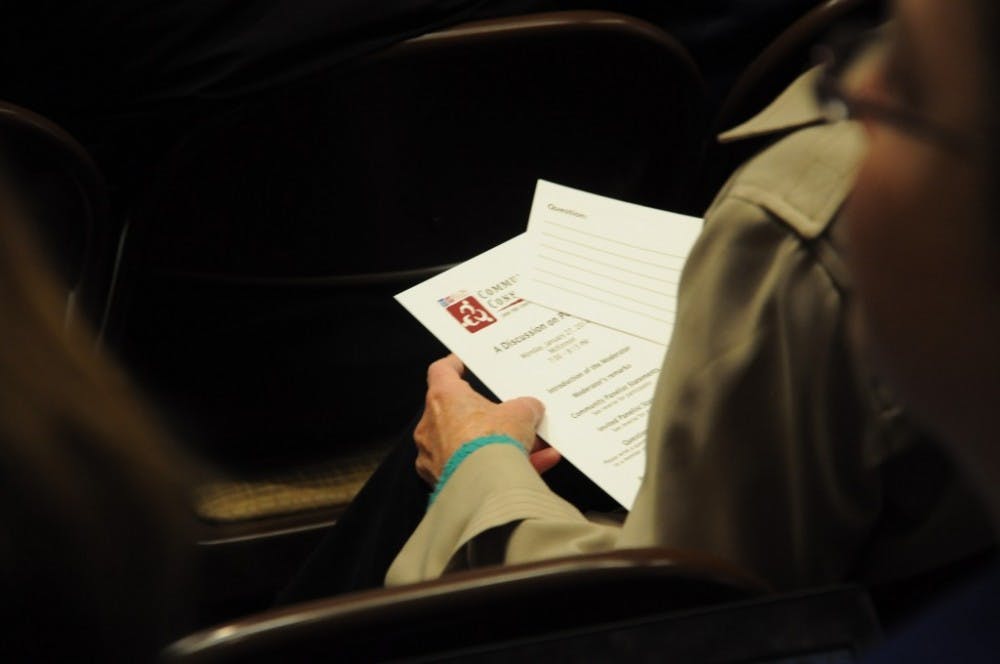 Pamphlets with figures pertaining to poverty were distributed throughout the audience. Photo by Meagan Casavant, staff photographer.

On Monday night, Elon University hosted a public forum in McKinnon Hall on the issue of poverty in the United States, North Carolina and Alamance County. The forum was led by 10 panelists, four invited by the university and six chosen through an application process representing the university and the surrounding area.

Kenn Gaither, associate dean of the School of Communications, opened the discussion.

“President Lyndon B. Johnson used his state of the union address to declare a war on poverty,” he said. “Tonight we consider whether that war has been won or lose, or where that war has led us.”

According to Phil Bowers, a community panelist and the executive director of Sustainable Alamance, there are still hundreds of thousands of men and women who do not have the access to the resources they need to rise above poverty.

“To have an impact on poverty we must build relationships with the poor, so they will see we value them as human beings,” Bowers said. “When we do life with the poor, we see that they have talents and dreams and that we might merge our resources so that we might walk together out of poverty.”

Throughout the forum, questions were posed on projectors such as, “Who should be primarily responsible for caring for the poor in our country,” and “Do you believe that ‘welfare’ benefits create a reason for individuals to not look for work?” The audience could pick  one of three answers via text, tweet or a written note, and the answers were displayed as they were sent in.

Kim Crawford, the executive director of Allied Churches of Alamance County told the audience her words were not just coming from her, but from the average of 70-85 people who spend the night in the shelter.

“Nearly 46 million people in the United States live at or below the poverty level today," Crawford said. "More than 16 million children under the age of 18 are living in poverty."

Leandra ‘Nikki’ Ratliff, the program services director at the Burlington Housing Authority, told the audience that common misconceptions about those in poverty - like they are lazy and don’t care about children - are not the norm.

“One-hundred-sixty-six of our tenants work and 131 of them are receiving disability or social security,” she said. “The faces of poverty are faces like yours.”

Children in poverty and in foster care were a focus of the night. The poverty rate for Alamance County in 2012 was 19.5 percent, and 29.2 percent of the children in the county live in poverty. For Scott Morrison, assistant professor of education, the topic hits close to home.

“My wife and I decided four years ago to open our home to children in need of care,” he said. “We have the arms to hold them, the lips to kiss them, the food to feed them, the beds in which they can rest peacefully and the strength to defend them tomorrow.”

Other panelists from Elon at the session included sophomore Jensen Roll, Toddie Peters, professor of religious studies, and Tom Hendricks, professor of sociology.  This was the second Community Connections program. The previous one held last fall focused on healthcare.