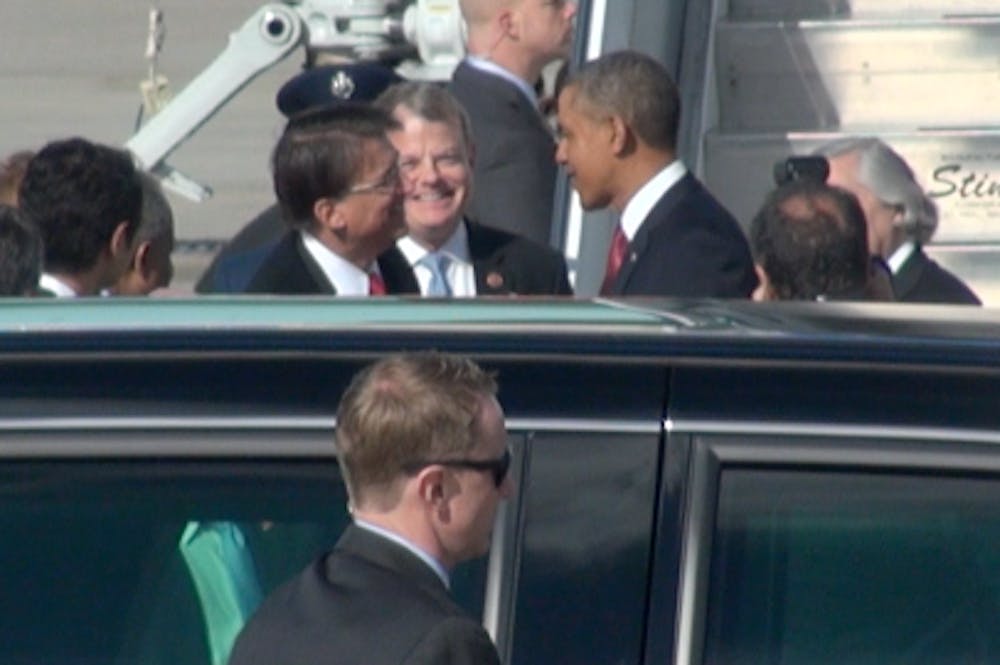 President Barack Obama touched down in North Carolina this morning, Jan. 15 at 11:10 a.m., bringing a message of hope for the unemployed.

Air Force One reached the Raleigh Durham International Airport Wednesday with the Commander-in-Chief welcomed by several bystanders, including Gov. Pat McCrory and about 70 invite-only guests stationed in the Observation Deck.

He delivered a speech at N.C. State University concerning his hopes of strengthening the manufacturing sector, boosting advanced manufacturing and making good jobs with good wages more attractive to a deserving middle class.

Immediately upon exiting the plane, the president met and spoke with McCrory, and left soon after to tour the Vacon Manufacturing Plant.

McCrory spoke to the press about his initial interaction with President Obama.

McCrory addressed the plight of the younger generation, specifically college graduates. His sister is an Elon alumna.

"We've got to build jobs and I'm going to work with the president to create jobs for the new graduates of Elon. A great school by the way."

"Study hard, exercise your brain and learn a skill that's applicable not only next year but in years to come."

McCrory concluded the interview by expressing how privileged and honored he felt, having spoken with the president, despite differing political viewpoints.

But not everyone was happy to see him.

Protestors lined the streets within N.C. State this same time, holding picket signs and megaphones, awaiting the president's arrival to the university.

After the speech, protesters gave their final shouts of discontent to the president's departing vehicle.