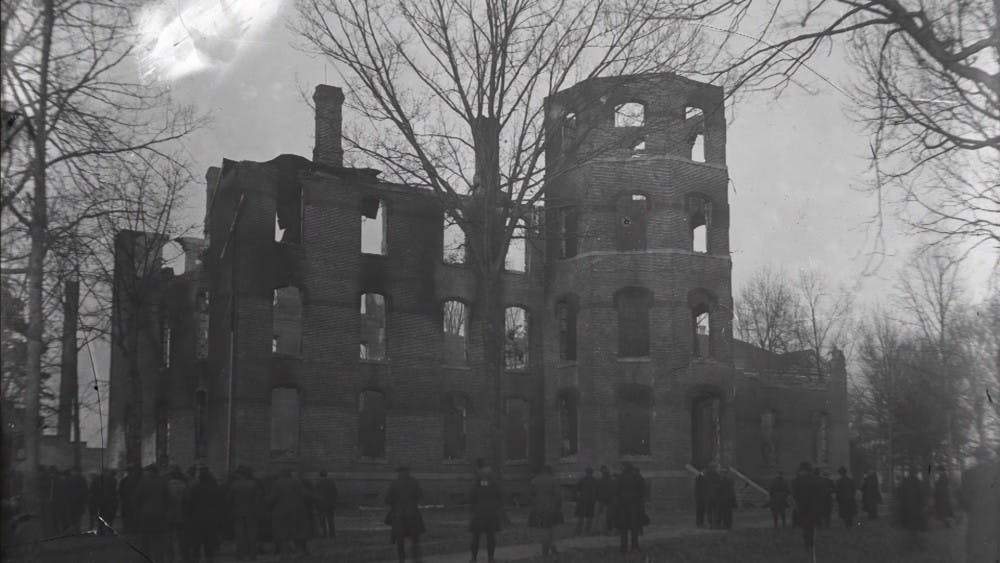 On the morning of January 18th 1923, a student working in Elon's power station saw something unusual. It was early in the morning, but there was a flickering light in the window of the student center on campus.

He walked from the power station, where the library currently stands, over to Main administration building. What he couldn't know on his walk there, was that he was too late. What he had mistook for a flickering light was something worse. The first flames of a fire that would completely claim the building.

"The administration building, what some students referred to as the college, burned down." Said former Elon professor and historian George Troxler. "That building had the auditorium, all the classrooms, all the offices, the library. That was essentially the college."

Despite efforts of the local community and students, the building was lost.

"It was a brick building" Troxler said. "But everything inside it was wooden. So the building burned extremely quickly."

The estimated loss was $125,000, almost 1.5 million dollars when adjusted for inflation. One week later, the board of trustees had a hard decision to make. They met in a makeshift office in East Dormitory to decide the future of Elon. Would the campus stay open? Or would it fade into local memory?

The Phoenix was their answer.

"In February of 23' there was an article in the National Christian Church Magazine," Troxler said. "Referencing that Elon would, like the Phoenix, rise again from the ashes."

Their answer was that Elon would come back stronger than ever. The board aimed high. Instead of just rebuilding Main, they decided to replace the building and expand. They would build five buildings where there had been one. It would cost an estimate $700,00.

Troxler said that it was this expansion that led Elon to the next crises. "A lot of the money was borrowed" he said.

At the time, borrowing seemed fine. Enrollment was up and the campus had seen huge support following the fire. No one could have foreseen what happened next.

"They had over extended themselves." Troxler said. Meaning that when the depression hit, "the bottom fell in."

The country was experiencing one of its toughest times in history and Elon was not immune. During the depression years, Elon's enrollment dropped almost 50 percent. The recently grown endowment dried up, and the donations that had sustained the university were no longer coming in. For the first time, Elon lost its accreditation and President Harper resigned. By all accounts, Elon seemed to be going under.

That's when Leon Smith stepped in. He had served previously as a trustee member and when Elon seemed to be on its last leg, he was the first choice.

"Leon Smith was the only person that the Christian Church thought could save Elon" historian Walter Boyd said. "And he reluctantly came to Elon."

"He said it was a no-win situation," Boyd said. "The school was going under and he didn't see a way to save it."

Elon took drastic measures. The school stopped paying professors. Elon graduate Edith Brannock was the daughter of Professor Brannock. To her, it was just part of life at the time.

"They didn't have the money" she said. "and daddy always had two big gardens. He had to, to feed the family.

But Elon pushed through. When Smith became President in 1934, the school'd debt was $768,000. Five years later, he had managed to lower in to $142,000. Smith was able to keep the school open through shrewd business practices and fundraising.

But just as things were starting to look up, Elon was hit again.

"I think it was 1942 that finally everything was paid off and then all of the sudden 'ok we're going backwards again." Boyd said.

The United States entered World War II. Not only did President Smith have to worry about money, he had to try and figure out how to keep a small private school open during a war.

"Once the war broke out...A lot of Elon students were drafted" Boyd said. "A number I've heard is that there were 600 Elon alumni in the armed services during the war."

In order to keep numbers up, President Smith had to take unusual measures. He made an agreement with the United States war department. Elon would start training more than just students. They would now start training army air core pilots.

"The West Campus was the civilian college." Boyd said. "The East campus was military, and the students from west campus could not go to east campus."

With new students, Elon had to face some new perspectives.

Boyd said that "they weren't the virtuous type of people. They were heavy drinkers, they were chasing women and it was very alien. It saved Elon during WWII because the army was providing money to keep the school open but it was kind of a culture shock."

Despite the draft and despite the need for any extra resources abroad, Elon increased its enrollment and saw growth of grounds, facilities and students.

For a small school, Elon has seen lots of trials. On many occasions, the school almost failed. But Elon survived the tough times and stood strongly rooted to celebrate its 125th anniversary.