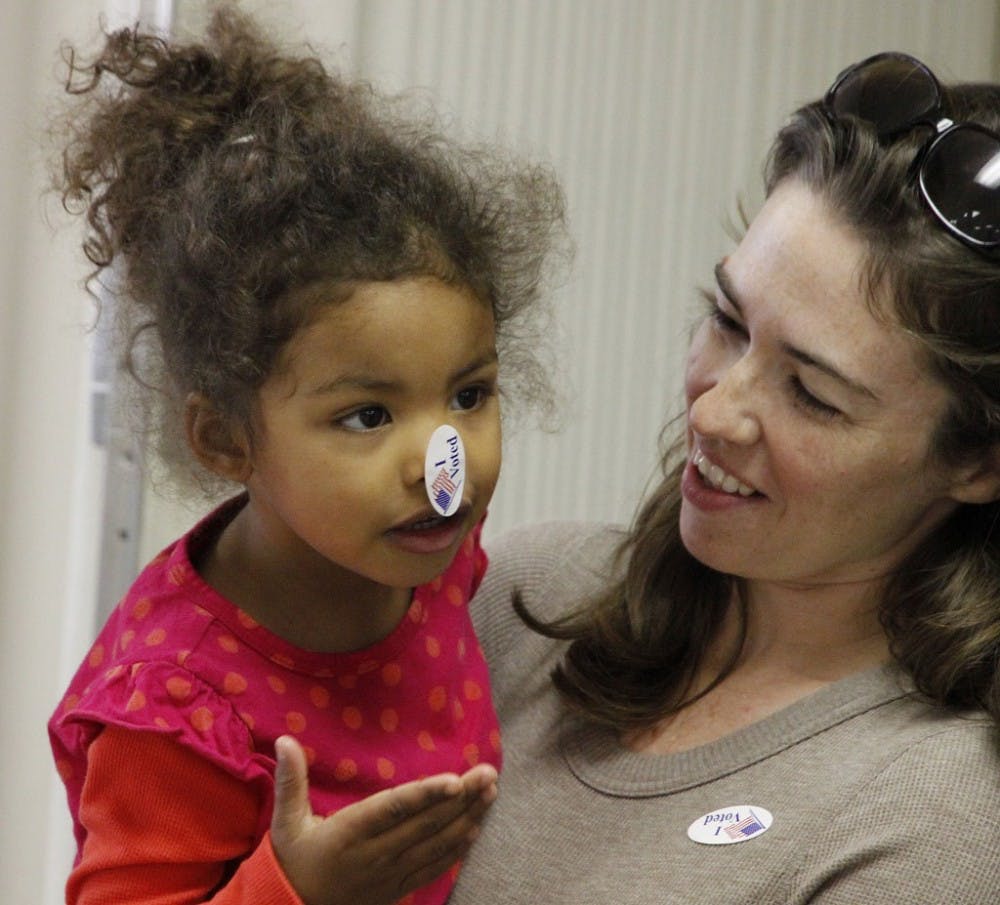 Selah Rust, 2, wore an "I Voted" sticker on her nose as she waited in line with her mother, Anne Rust, at the Woodland, Kentucky, precinct in Woodland Christian Church during voting on Tuesday, November 2, 2010. (David Perry/Lexington Herald-Leader/MCT)

As a general rule, when state politics hit the national scene, it’s only because something has gone horribly, desperately wrong. And for at least one of these stories, that was certainly the case.

Aasif Mandvi of “The Daily Show” was kind enough to travel to Buncombe County, North Carolina to speak with Republican Precinct Chair Don Yelton. The topic was the same as it has been for months: North Carolina’s stringent, comically inappropriate voter ID law.

Yelton explained clearly and concisely that the law was not intended to prevent the “one or two” cases of voter fraud every year. Instead, he explained through thinly veiled delight that, “the law is going to kick the Democrats in the butt.”

It’s more than a little unusual to see such transparency from a government official, but his actual message was hardly a surprise. Despite vocal arguments from N.C. House members and even Gov. Pat McCrory, the national consensus was the law was intended to keep Republicans in place, at the expense of Democratic voters.

But what was surprising was how eager Yelton was to target the specific demographics he saw as unworthy of voting. And before poor people, even before African-Americans, the group Yelton is most eager to systematically disenfranchise is college students.

“If it hurts a bunch of college students too lazy to get up off their bohunkus [sic] and get a photo ID, so be it,” he said.

Yelton is referring to a part of the law that forces students from out-of-state to apply for a new North Carolina ID in order to vote in local elections. Previously, students simply needed any photo ID, such as the one from the college they’re attending, in order to participate.

But the law goes far beyond actually requiring government IDs to vote. House Bill 589 prevents 16- and 17-year-olds from preregistering to vote, and eliminates same-day voter registration. It moves many voting precincts off college campuses into far less accessible areas, and reduces the duration of the early voting period. The law may intend to damage Democrats, but whether you’re liberal or conservative, if you’re in college, then you’re a target of H.B. 589.

In 2012, more than 40 million Americans between the ages of 18 and 29 were eligible to vote. Nationally, youth voters make up about 20 percent of the total voting population, and generally, they tend to vote democratic. Last presidential election, two-thirds voted for Obama, while only one-third voted for Romney. The strategy behind H.B. 589 is sound, but the justification is beyond twisted.

Regardless of which party you support, North Carolina’s voter ID law should be a slap in the face to every single college student. College-aged Republicans will face the same obstacles when voting as Democrats will. The bill doesn’t target all Democrats, it targets all college students.

The ever-growing trend of viewing young people as lazy, disinterested and unworthy of respect in the public domain has spilled over into politics, and the North Carolina Republicans have decided to run with it.

The issue is less about Democrats or Republicans. Openly admitting in front of a live camera that a law is designed to weaken any group of voters is a massive distortion of the democratic process. Whether the disenfranchised group is conservative or liberal, black or white, rich or poor, the problem is the same. Democracy is intended to represent the views of everyone, not simply the ones deemed “worthy” of the privilege.

Each May, hundreds of thousands of college seniors adorn themselves in school colors, strap on square hats and listen as someone much older and much wiser tells them how important they are. They are told they are the next generation, the future of our nation, the ones who will have to clean up the mess that our parents have made before us. It’s a nice speech, maybe even one that new grads will carry with them into new jobs and new cities.

But H.B. 589 and North Carolina lawmakers make it very clear that college students are not welcome in the current order, and until you turn 30, you can keep your opinion to yourself.