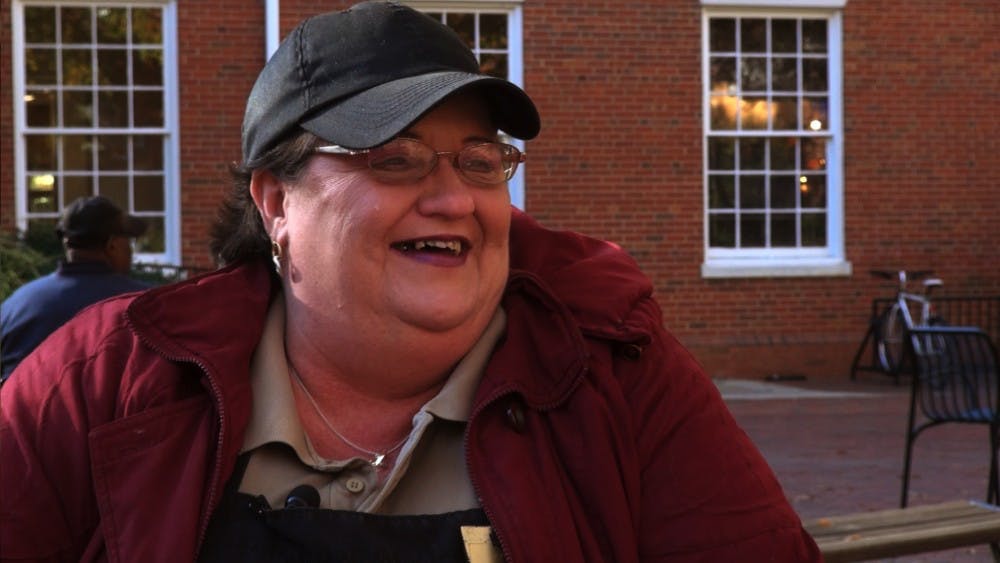 Many people in Elon's past and present have made a difference at the university. Of these so called heroes, some have a building named after them and some have a scholarship given in their name, but others don't always get the credit they deserve. These people are the unsung heroes of Elon.

She's the person swiping your Phoenix Cards at McEwen Dining Hall with a friendly smile and a warm hello. Her name is Judy Tillotson, but students know her a Miss Judy.

"My favorite part of my job is greeting the children every day, well I say the students because when I say children they think I'm talking about 5 or 6 year-olds," Tillotson said.

When students are having a tough day, she hopes to lift their spirits with some words of encouragement.

"When they come in saying well I have been studying all night I say, 'well sweetie, come in and get something to eat. I have faith in you, you're going to do good,'" Tillotson said.

It's no secret that Friday is her favorite day of the week. Her famous Friday dance reminds students to celebrate.

"People come in rushing from class to class and you say slow down and smile, it's Friday!" she said.

For Miss Judy, it's all about having fun. She remembers helping one student ambush his friends in a snowball fight.

"He got them, It was so funny," Tillotson said. "I saw it through the window."

It's her big personality that makes her so special.

"It's is nice to know I can relate to the students. It makes my day and I am really proud about it," Tillotson said.

Anybody who has had a bad day can take a trip to McEwen. Chances are Miss Judy will be there to make it better.

Stepping outside McEwen and onto the Bio Bus, students can find another unsung hero. His name is Johnny Williams. He's been driving the Bio Bus for three years and says he loves it.

Like many of Elon's unsung heroes, Johnny goes beyond his daily routine to help students. He bought a shopping cart to loan students carrying large amounts of groceries.

Williams retired from the N.C. Department of Transportation and has loved cars his whole life; however, it's the students that keep him coming back to work each day.

"Some of them I've built good relationships with," Williams said. "Several of them get on here and give me a hug, and I love that!"

Whether riding the Bio Bus or just walking around campus, it's easy to see how beautiful Elon's campus is and one of the experts behind it all is Susan Tripp.

"I love being a gardener," Tripp said. "I've been a gardener for a long time."

For Tripp, being outside is the best part of her job. After going to college to become a social worker, Tripp decided to pursue an entirely different career path.

"I think I would lose my mind if I had a desk job, I do. I think I'd probably weigh about 600 pounds and be miserable and headed to the psych ward," she said.

She decided to pursue gardening, a less profitable profession, but more enjoyable.

"Life is short, so in my opinion it's best to enjoy your day and enjoy what you do instead of just stockpiling money that you may never be able to spend," Tripp said.

Although she spends most of her day doing what she loves, being a landscaper on Elon's campus has its negatives.

"Coming in when it snows and there's ice, we have to be here. It doesn't matter where we live or how we're going to get here," she said.

Building and maintaining a campus as beautiful as Elon's is no easy task, but Tripp is up for the challenge. She says the landscaping staff tries their best to achieve perfection.

Susan Tripp and others are just a few of Elons Unsung heroes, but the campus is full of them. Dwight Davis is the late night librarian at Belk. He starts work at midnight and leaves at 8 in the morning. Davis gives wake up calls to students who fall asleep studying. There's also Miss Sue, a janitor in the West Dorm who has worked at Elon for two decades keeping the dorms clean. In addition, Leon Knight and William Milton who work day and night to keep the buildings clean.

There are also unsung heroes who are no longer with us. Thomas Barnett was on track to graduate in 2007, but because of a disease called Friedreich's Ataxia, he never made it to graduation. Barnett was a strong advocate for universal access into buildings and raised awareness around Elon for people who might not be able to climb the steps to get to class. There was Andy Morgan, who was a maintenance worker for 38 years. He was very well known on campus at that time and was named one of the oldest and best loved employees in his obituary.

It takes hundreds of unsung heroes to keep Elon running. Without the unsung heroes of the past and present, Elon would not be going 125 years strong.