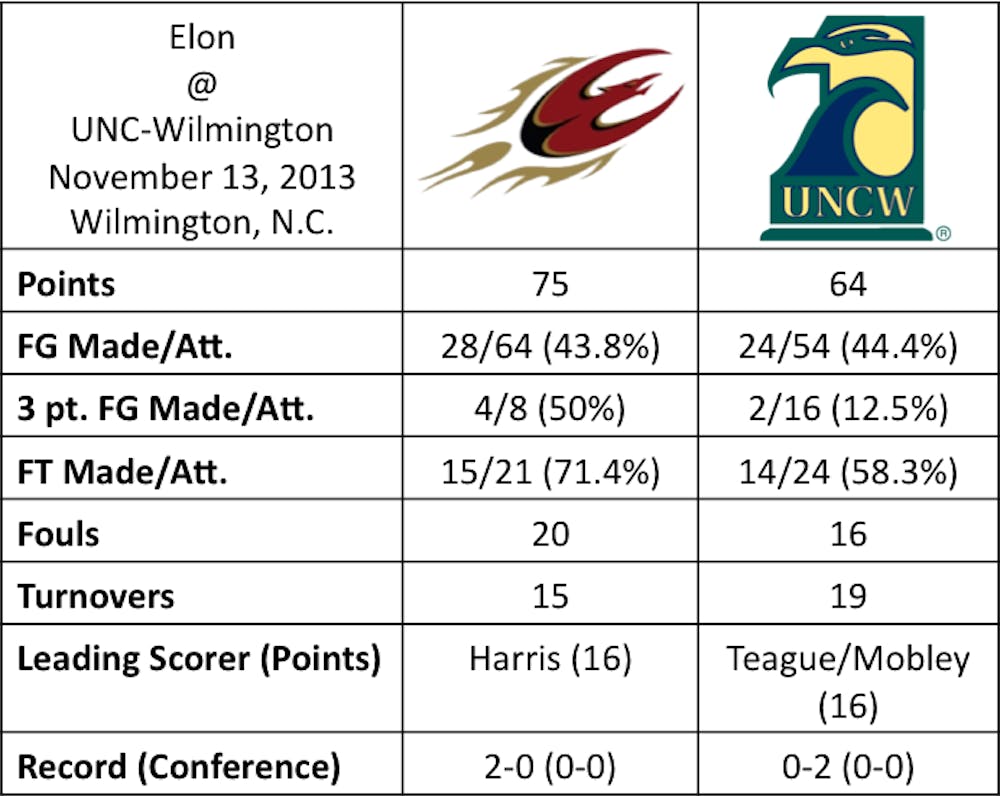 The Elon University women’s basketball team went on the road and defeated future conference rival in the Colonial Athletic Association, the University of North Carolina at Wilmington Wednesday, Nov. 13, by a score of 75-64.

Freshman forward Jenifer Rhodes led the Phoenix with a double-double in her first regular season appearance, scoring 12 points and grabbing 10 rebounds. Senior guard Kelsey Harris added a double-double of her own racking up 16 points, tying the game-high, and dishing out 10 assists.

Elon shot particularly well in the contest, finishing with a shooting percentage of 44 percent from the field and a solid 50 percent from behind the arc.

The Phoenix edged out to an early lead and despite the Seahawks best efforts, Elon went into the locker room with a slim 32-28 lead. The Phoenix led by as many as seven in the opening period, but a late three-pointer from freshman guard Nagaiyyh Teague cut Elon’s lead to just four. Harris and freshman guard Lauren Brown led the Phoenix at the break with seven points each.

The Elon defense propelled the team to victory against the Seahawks, as the Phoenix forced 19 turnovers and held UNCW to just 13 percent from behind the arc. Despite the tough defense, three Seahawks reached double figures. Teague and freshman guard Brie Mobley each recorded 16 points each on a combined 12 of 19 shooting. Freshman guard Amber Reeves chipped in with 15 points of her own.

The Phoenix pushed on into the second half and extended their lead to 10 with just under nine minutes remaining in the contest. Rhodes made her way into the paint and scored a difficult layup to push the lead to double figures.

LAST TIME OUT: Elon escapes in season-opener against Winston-Salem State

Another layup from Brown three minutes later extended Elon’s lead to a game-high 13 with the score 64-51.

The Seahawks cut the deficit to six with just over two minutes left in the game, but the Phoenix held on for the victory.

Elon will stay on the road for its next game on Sunday, Nov. 17, when the Phoenix travel to Richmond, Va to take on Virginia Commonwealth University. Last season, the Phoenix beat VCU at home 74-58.