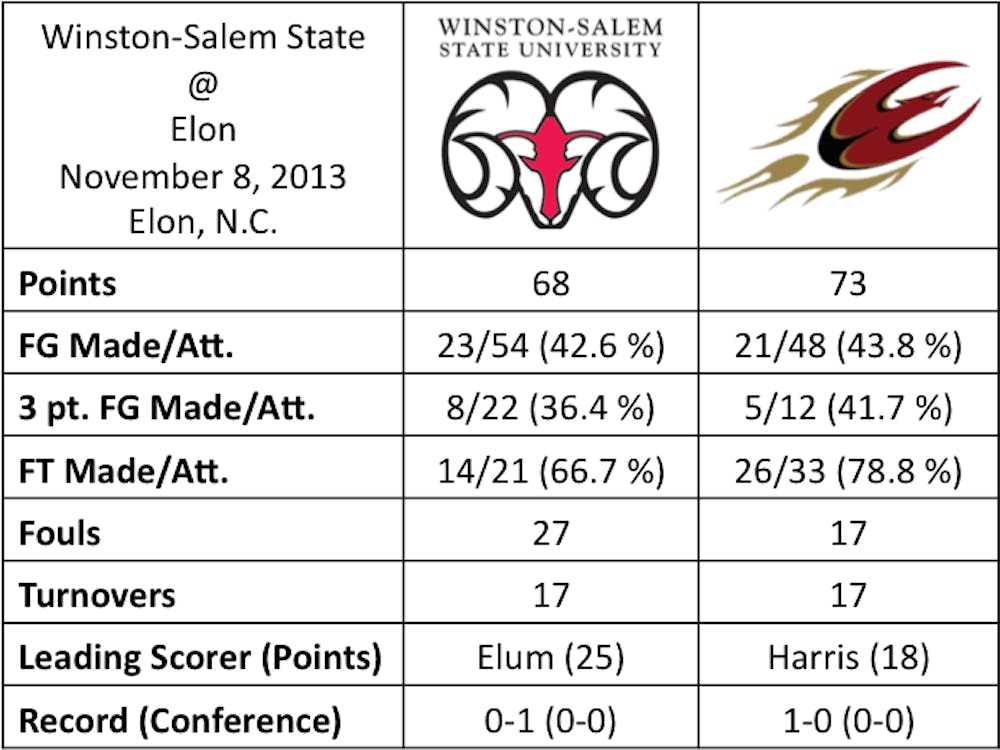 The Elon University women’s basketball team edged out the Winston-Salem State University Rams in its season opener 73-68 on Friday, Nov. 8. Senior guard Kelsey Harris led the way for the Phoenix with 18 points and seven assists, while junior forward Sam Coffer chipped in with a double-double tallying 14 points and grabbing 14 rebounds.

“Just excited that we were able to come out with the win tonight," said Elon head coach Charlotte Smith. "But there are a lot things we have to work on."

Sophomore forward Autumn Carter scored the first basket in the 2013-2014 season for the Phoenix 39 seconds into the contest. The two teams were unable to break away from one another in the early going. Winston-Salem State managed to get ahead 19-13 lead after a jumper from junior forward Jovonah Graham.

Trailing 21-15 with 10:31 remaining in the first half, the Phoenix went on an extended 19-4 run to take a 34-24 lead. The run was capped off by a three-pointer from junior guard Zora Stephenson. The 10-point lead would tie Elon’s largest lead in the game. A pair of free throws by junior forward Chaylia Coleman cut the Phoenix lead to eight as both teams entered the locker room with the Phoenix leading 34-26. Harris accredited the team’s defense for the run late in the half.

“I felt that at the end of the first half, we were playing defense collectively,” Harris said.

“I felt there was a lapse in focus early in the first half," Smith said. "I felt in the second half we were able to regroup."

The Rams climbed back into the game in the second half. Harris extended Elon’s lead back out to 10, but junior guard Jasmine Elum shot Winston-Salem State back into the game. Three straight three-pointers from Elum tied the game at 43, the sixth deadlock of the contest.

It was Winston Salem State’s outside shooting that kept them in the game as the Rams shot an impressive 7 of 14 from behind the arc in the second period.  Junior guard Vanessa Weston made three shots from behind the arc while Elum made three of her own. Elum lead all scorers on the night with 25 points on 10 of 20 shooting.

"She got a lot of good looks," Smith said. "It was just a breakdown in communication at times."

The Rams and Phoenix exchanged leads on four straight possessions in the second half. A Carter layup with 11:26 remaining in the game gave Elon a 48-47 lead. The Phoenix would not surrender the lead for the rest of the game.

A layup from freshman Lenaira Ruffin followed by a Stephenson three-pointer extended Elon’s lead to six with the score at 53-47 with 9:38 remaining in the game. An Elum free throw pulled Winston-Salem State to within two, the closest they cut the lead in the second half after Elon held the lead for good.

A pair of free throws from freshman point guard Lauren Brown and Coffer along with a Coffer layup extended Elon’s lead back out to eight with 2:02 left.

“It just felt good to be back,” Coffer said, who was battling a foot injury for much of the preseason.

Down eight in the closing minute, the Rams scored two quick baskets to cut the deficit in half to four. The Phoenix responded with some clutch free throw shooting down the stretch. Harris and junior forward Shannon Cochraham each made a pair of free-throws to bring the lead back to eight.

Free throw shooting proved to be one of the strongest aspects of the Phoenix’s performance against the Rams. Elon reached the charity stripe 33 times during the game, making 26 of them, which was good for 78.8 percent.

“I’m really proud how we stepped up and hit those shots when it mattered tonight,” Harris said.

A three from junior forward Raven Fields proved futile as the Phoenix escaped with a 73-68 win.

“I didn’t think this was a team we could take lightly," Smith said. "They’re a great team."

The Phoenix will hit the road for a pair of games against the University of North Carolina at Wilmington Wednesday, Nov. 13, and against Virginia Commonwealth University Sunday, Nov. 17, before returning home to face East Carolina University Saturday, Nov. 23.