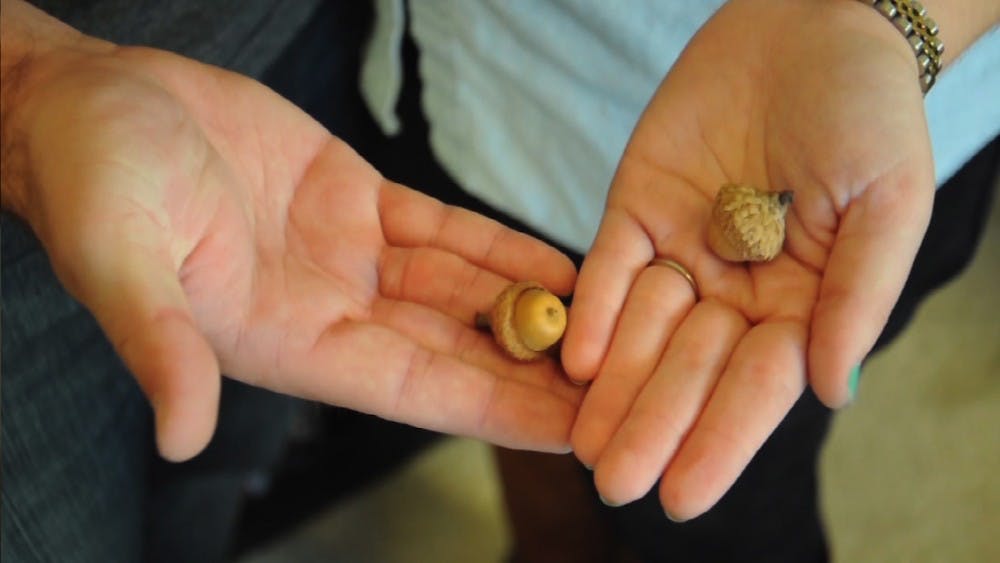 From commencement under the oaks, to College Coffee on Phi Beta Kappa Commons, Elon's brick paths echo with memories steeped in traditions. But where did many of Elon's traditions come from? Here's a look at Elon's past to find out how these events started and how they are shaping the campus and its community for Elon's future.

The journey begins at the start of one of Elon's first and main traditions, when each graduating member's name was read aloud as they got their diploma - a tradition that's carried out under the oaks still to this day.

Commencement speaker and Elon graduate Furman Mosley started the tradition of passing out saplings to new grads. President Young made the tradition permanent one year later in 1992 when each graduate received an oak sapling.

But current president Leo Lambert took it a step furtherwhen he started handing out acorns to freshman and new students at convocation.

Students like sophomore Sarah Vaughan said they hold on to their acorns as reminders of their first few moments at Elon.

"It's a great way to connect all of the classes and just have something that we can all look back at and remember Elon," she said.

But current students aren't the only ones remembering this tradition. Graduates are also refusing to let go of their acorns. Recent Elon alumni Rachel Southmayd and David Campbell still have their acorns and saplings, and for them, the tradition is reflective of their time at Elon.

"For me our acorns and our saplings symbolize that our journey as adults, as productive members of society, really began at Elon," Southmayd said

Since they are also graduates, Southmayd and Campbell got an oak sapling to remind them, that even with the uncertainty graduation brings, they will always have memories of Elon to hold on to.

"You're holding on to that, and some people don't know where they're going to be moving, they don't know what jobs they have," Campbell said. "If you do know what job you have you don't really know what's going to happen to your life from there on out. It's your anchor."

But acorns and saplings aren't the only things students get to hold onto to remind them of Elon.

At the annual Call to Honor ceremony, freshman and new students get a medal reminding them of the four pillars of Elon's Honor Code: Honesty, Integrity, Respect, and Responsibility.

Assistant Vice President for Academic Affairs Mary Wise played a big role in starting the Call to Honor and she says while the physical medals are an important part of the ceremony, it's a celebration of something intangible.

It's really also about building character," Wise said. "Being an honest person and having integrity will last a lifetime. So I'm delighted that they're hanging on to symbols of that."

The ceremony is still new - this year only marked the eighth annual ceremony - but Senior Natalie Cuzmenco said that it meant a lot to leave her mark in a relic dating back to the 1930s.

"When I saw all the previous signatures of all the people that have signed it in the past, I realized that I was a part of something that was way bigger than me," she said. "It was a great honor."

But signing an oath to uphold the honor code isn't the only special thing going on around Elon's campus. Every week, Elon gathers in the Phi Beta Kappa Commons for community and coffee.

The tradition began almost 20 years ago in the 1980s when former president Fred Young wanted a way for the community to connect. And even to this day, it's a time for students, professors, even coaches to socialize, or rally together, all in one spot.

Freshman Holly Holsopple said she enjoys College Coffee because of the atmosphere.

"You just get to see all you friends and it's just a fun environment," she said.

Even President Lambert makes an appearance.

"It's really I think one of the cornerstones of our community at Elon and something I truly love," he said.

And even though the scenery for College Coffee might have changed over time, one thing that hasn't changed is the excitement people feel for the weekly tradition. Faculty member Deandra Little said she loves feeling the sense of community.

"It's very different than other institutions I've been, in that the whole campus community comes together, once a week," Little said. "It's a great way to see people, to see students, to see other faculty, and connect."

But College Coffee isn't the only time that the whole campus community comes out and gathers together. One of the last celebrations for the fall semester is the Festival of Lights, better known as Luminaries.

Arguably one of the most festive times at Elon, Luminaries brings together people from all faiths to celebrate during the holidays.

First started by former chaplain Richard McBride in 1984, the annual event has grown from a small Christmas tree-blessing ceremony to a festival that includes more than 15 hundred lighted luminaries lining the brick paths, an appearance by santa, caroling, hot chocolate, and of course, lighting the menorah.

"It's a wonderful community event," McBride said. "It's beautiful to see the luminaries all lit. It's just fun. It's good fun."

But Luminaries wasn't always the festival that Elon students know it as today. There was a time when it was only a Christmas celebration. After Thanksgiving break, Elon would gather to bless two Christmas trees in front of Alamance, but one day, a student asked for McBride to extend the holiday cheer to Jewish students, too.

"So, I said, 'Certainly, I'll say happy Hanukkah,'" McBride said. "That was the beginning of the shift from blessing Christmas trees to having a holiday celebration of holiday lights.

McBride said he hopes that the Luminaries celebration will remain well into the future and continue to bring people of the Elon community together during the holidays.

From alumni to current students, from College Coffee to Commencement, these traditions and the people who share in them are all part of the fabric of Elon. And while Elon has changed through the years, these traditions have grown to be constants.