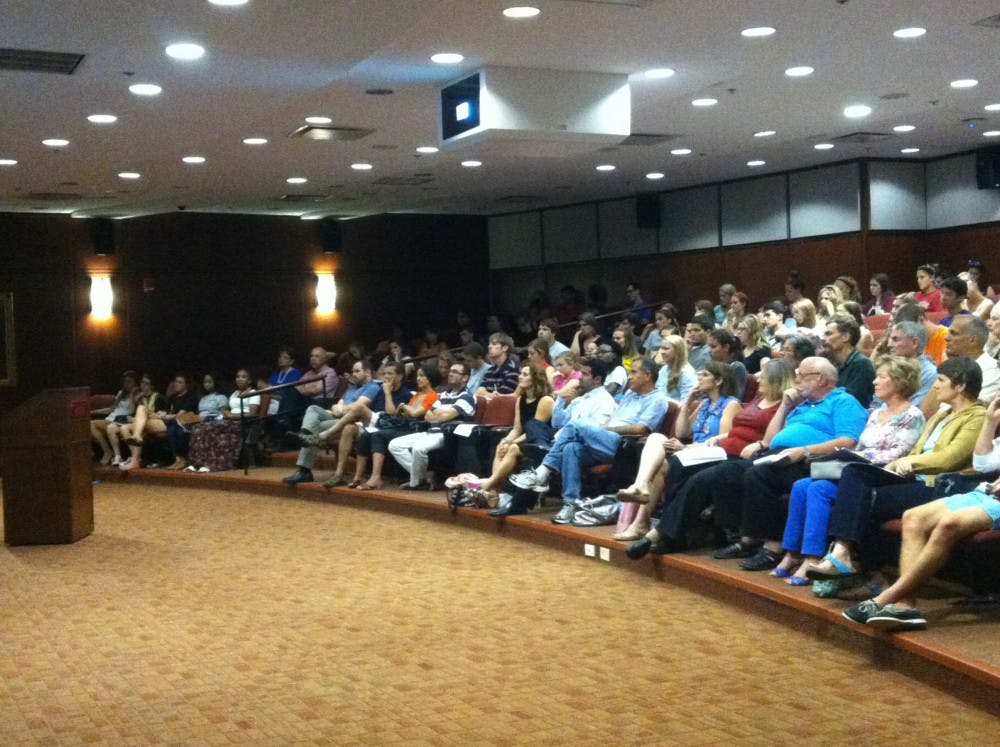 A crowd gathers for the first annual Elon Hispanic Film Club series. The festival began Friday, September 6 and will run through November 8.

Elon University encourages its students to look at the world through a difference lens.

This semester that lens can be found through a wide variety of Spanish films.

Members of the university and the community gathered on Sept. 6 to participate in Elon's first Spanish film festival, in a special viewing of Even In The Rain in the LaRose Digital Theater.The festival joins the already existing French film festival in supporting the university's vision expanding diversity on campus.

Dr. Ketevan Kupatadze, a lead organizer for the film festival and an Elon professor, hopes that the Spanish film festival opened the minds and perspectives of the Elon community .

"I think it promotes diversity in a sense that the Elon community and the people outside the Elon community will have a chance to see the different interpretations of life through the lenses of directors, and actors and stories that come from other cultures and perspectives,"  Dr. Kupatadze said.

The Spanish Film Club series is made possible by grants and support not only from the university but also from groups such as Pragda, Embassy of Spain in Washington, D.C., Spain-USA Foundation and the Secretary of State for Culture of Spain. The Spanish Film Club went through an extensive application process to gain the funds necessary to host this free film festival.

The films featured not only highlights of Spanish culture but also intentionally collaborates with Latin American countries as well. Afterward, a short discussion amongst the audience occurred, in order to discuss the film's themes and portrayal of various cultures.

Dr. Mayte de Lama, another organizer for the festival and an Elon professor, shared her goals for the showing these films.

"I'm hoping to reach out to a lot of people and expose them to different cultures, the beautiful language, in my opinion, and different cultural products that we in the United States don't normally get to see," Dr. de Lama said.

De Lama and her colleagues are also excited for the chance for the local Hispanic community to view Spanish films that normally would not be available in local cinemas.

The Spanish film festival is free to the public and will feature four more films on campus throughout the semester. The next film, Here and There, will be showing at 6 p.m. in McEwen 011 on Sept. 20.

Check out the Elon website for more information about the films and the festival.