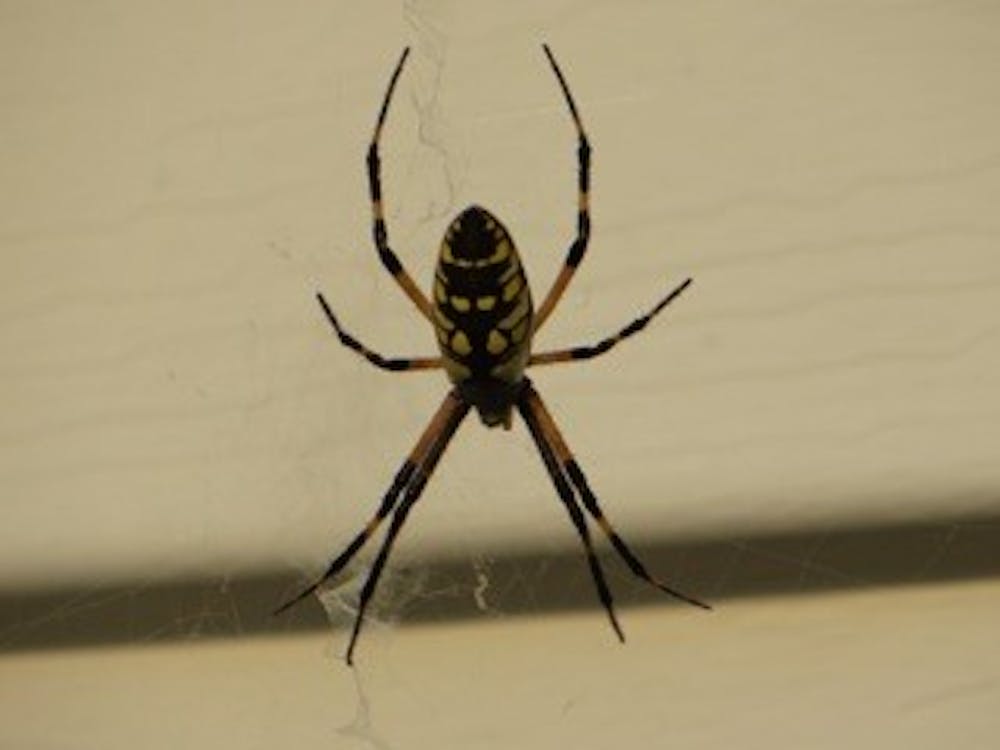 Whether you're a student living on or off-campus, you may have noticed more creepy-crawlies around your house than in years past.

Many students are saying that spiders are roaming students' homes in greater numbers than last year, and in some cases, they're bigger than before.

Large spider webs seem to be common in the fall on Elon's trees.

"I'm not really scared of spiders," Senior Tucker Bolding said. "But the size of this thing would make anyone jumpy."

Bolding is referring to the fist-sized arachnid that lived under his porch for a week. He may live in a house off-campus, but that does not mean he is safe from the spiders around Elon.

"It's big, yellow and striped and it looked poisonous, which is why initially it was kind of frightening," he said.

Bolding said he has had problems with bugs before, but never a spider this size. But Bolding is not the only student battling the un-welcomed guests. Junior Avery McStay said she could not handle the amount of spiders and bugs in her Mill Point apartment. She called Physical Plant for an exterminator before she even moved in.

"The walls connected to the floor were just lined with bugs and dead spiders and all these gross creatures," McStay said. "It was awful."

It's something that has gotten the attention of the Elon community. Many students are saying spiders are roaming the area more than last year, and they seem bigger.

"They've been in the doorway of my room, like right on the carpet, and I think one of them came out of the bathroom," said Senior Kelsey Ammondson, who lives in a Station at Mill Point apartment.

And even on campus, students aren't safe.

"I've seen them outside of our building," said Virginia resident Hope Nolin. "I have a huge spider bite on my leg, so I'm sure that there's one in the room somewhere."

But Physical Plant Environmental Services Director David Worden says spiders tend to follow their prey, so if they're inside your home, it might indicate a bug problem.

"They are kind of scary looking," Worden said. "They don't attack people. What they do is they set up camp so they can kill of the insects that typically do bother us."

Worden said this summer's rainfall, warmth and high humidity are to blame for the increased spider presence, but unless they are venomous, that's not necessarily a bad thing.

"To kill off spiders is really not in our best interests," he said. "We want to let them thrive, let them do the things that they need to do."

If you're looking to get rid of pests, here are some tips. Get rid of conditions that attract spiders and bugs, like left out food. Try to find the places where they can enter a home and seal them off. Students in off-campus housing can also call an exterminator.

If you're having trouble on campus, you can submit a work order simply by visiting Physical Plant's website. Worden says there have been seven spider-related work order requests since move-in, but none have been because of spider bites.