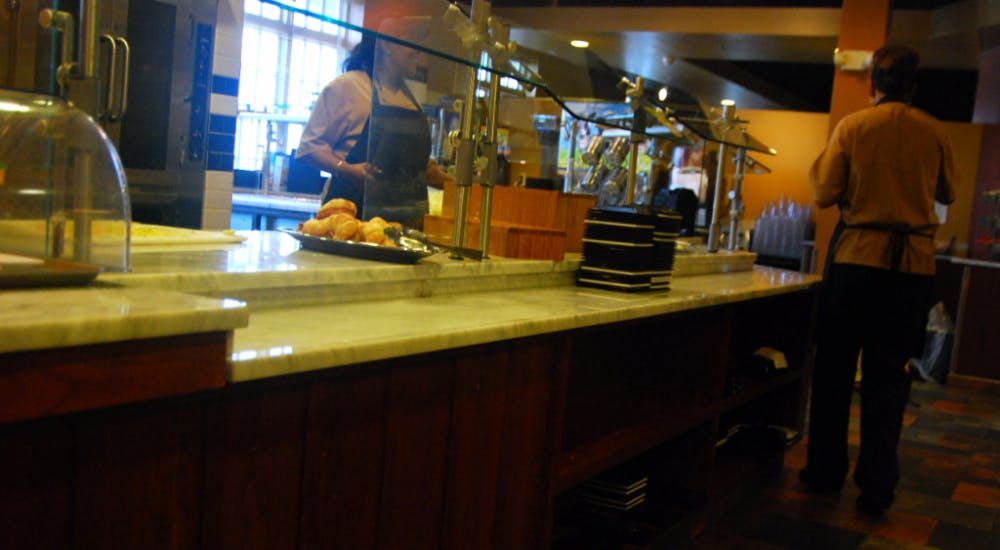 UPDATE: As of Oct. 1, Colonnades has been reevaluated and received a score of 95.

Colonnades Dining Hall at Elon University is working to improve its food preparation practices following its low health and sanitation rating by the Alamance County Health Department last week. Colonnades and the adjacent 1889 Grill Room received a score of 82, 14 points lower than its former score of 96.

ARAMARK, Elon’s food service provider, is holding its employees accountable for meeting the state’s standards of hygiene before the Alamance County Health Department re-evaluates the facilities this week.

“Our Dining Services team has implemented a corrective action plan to improve operations, enabling us to be even more proactive in our practices,” said Kate Nelson, marketing manager for ARAMARK.

The county health department inspects the dining facilities on Elon’s campus four times a year, holding them to state sanitation standards. The health evaluation score from the Sept. 17 inspection was published on the North Carolina Public Health Inspections database. The report deducted points for violations of safe practices, and some violations were noted as critical.

One employee dropped a knife on the floor and continued food handling duties without stopping to wash his hands after retrieving the knife and setting it aside to be cleaned. One hand-washing sink was deemed difficult for employees to access, one was out of soap at the time of inspection and another did not supply water hot enough to kill germs.

Shrimp gumbo was not properly cooled and had to be discarded. Cooked french fries were stored at 94 degrees, even though potentially hazardous hot foods are required to be maintained at 135 degrees or higher in order to prevent the development of salmonella and other bacteria.

Three coolers were found in need of service, and an ice machine and sink were marked down for heavy mold build-up. Some food was not date-marked, and a bag of lettuce was stored for nine days. The state requires many ready-to-eat and potentially hazardous foods to be consumed, sold or discarded within four days of preparation or storage to limit the growth of pathogens and toxins.

Self-service foods, including butter, granola, salad toppings, cheese and cookies, were not protected with sneeze guards. A few stored dishes were found dirty, and clean utensils were stored with a greasy surge protector strip. The facilities received other demerits for failing to properly sanitize wiping cloths.

Across the state of North Carolina, health and sanitation inspections have become an increasingly painstaking process. Last year, the environmental branch of the Alamance County Health Department released an updated document of food service sanitation rules to which dining establishments must adhere.

The list identifies the top five risk factors found in any kitchen, including improper holding temperatures and poor employee hygiene, along with ways to combat those risks behind the scenes. Food handlers are now required to wash their hands more frequently throughout the day, and mandatory holding temperatures have been adjusted.

Nelson said Elon takes a number of precautions to ensure each facility is meeting the state requirements for inspection.

“We have an institutional priority of maintaining at least a 97 percent on all of our inspections,” Nelson said. “The criteria developed by the state continuously becomes more stringent, and the Elon facilities continue to receive the same high scores.”

But it wasn’t always that way. In April 2002, The Pendulum reported several facilities that had not scored nearly as high as they do now. At the time, the highest on-campus sanitation grade was a 94.5 at McEwen Dining Hall. The lowest was at Acorn Coffee Shop: 88 percent.

But according to Nelson, ARAMARK has assisted Elon’s employees in becoming more conscious of sanitation throughout the years. This includes fulfillment of a training program called ServSafe which, if completed by a manager or employee, was formerly able to boost any dining establishment’s sanitation grade by two points. Now, SafeServ certification is a requirement for all food service employees in the state.

“As an organization, we do have a third party inspect our facilities as a part of our safety platform,” Nelson said. “All of our managers are ServSafe certified, and we have continuing training and developmental opportunities for our front-line associates.”

Poor sanitation practices on college campuses can lead to food-related illnesses caused by bacteria and other practices, as well as problems for people who have food allergies. Despite the recent Colonnades Dining Hall demerits, on-campus eating establishments consistently score high sanitation ratings, often ranging between 97 and 101.

Freshman Victoria Murphy said she believed Colonnades employees would improve their sanitation. Even though her friends encouraged her to eat at other dining locations, she said she continued to eat there, partly out of convenience.

“I’ve been eating here for a month, and I’ve been fine,” she said. “I trust that they will do what they have to do.”

Freshman Caroline Grell also said that she still ate at the dining hall after the score was issued.

“I feel like now that it’s public knowledge, they’ll do something about it,” Grell said.

Sophomore Sarah Vaughan said the rating at Colonnades might influence other on-campus eateries to improve their sanitation practices.

“It sends a message for other dining halls to watch out,” she said.

Vaughan said she did not pay attention to Elon Dining’s sanitation practices before the Colonnades rating. When the score was released, she said she understood that the facility was deducted points for health violations.

“I was really surprised that a low rating would be given at a college,” Vaughan said. “I don’t want to be eating something that’s not prepared very well.”

Despite these negative attitudes toward the news about the Colonnades inspection, ARAMARK is optimistic about its prevention program, according to Nelson.

“We are committed to the health and safety of Elon students and we are confident that we will continue to maintain a quality dining program,” Nelson said. “ARAMARK will continue to follow all of the local health regulations and retrain all employees on their ServSafe certification.”