The Summer Swing: Why it's OK to derail your life plan 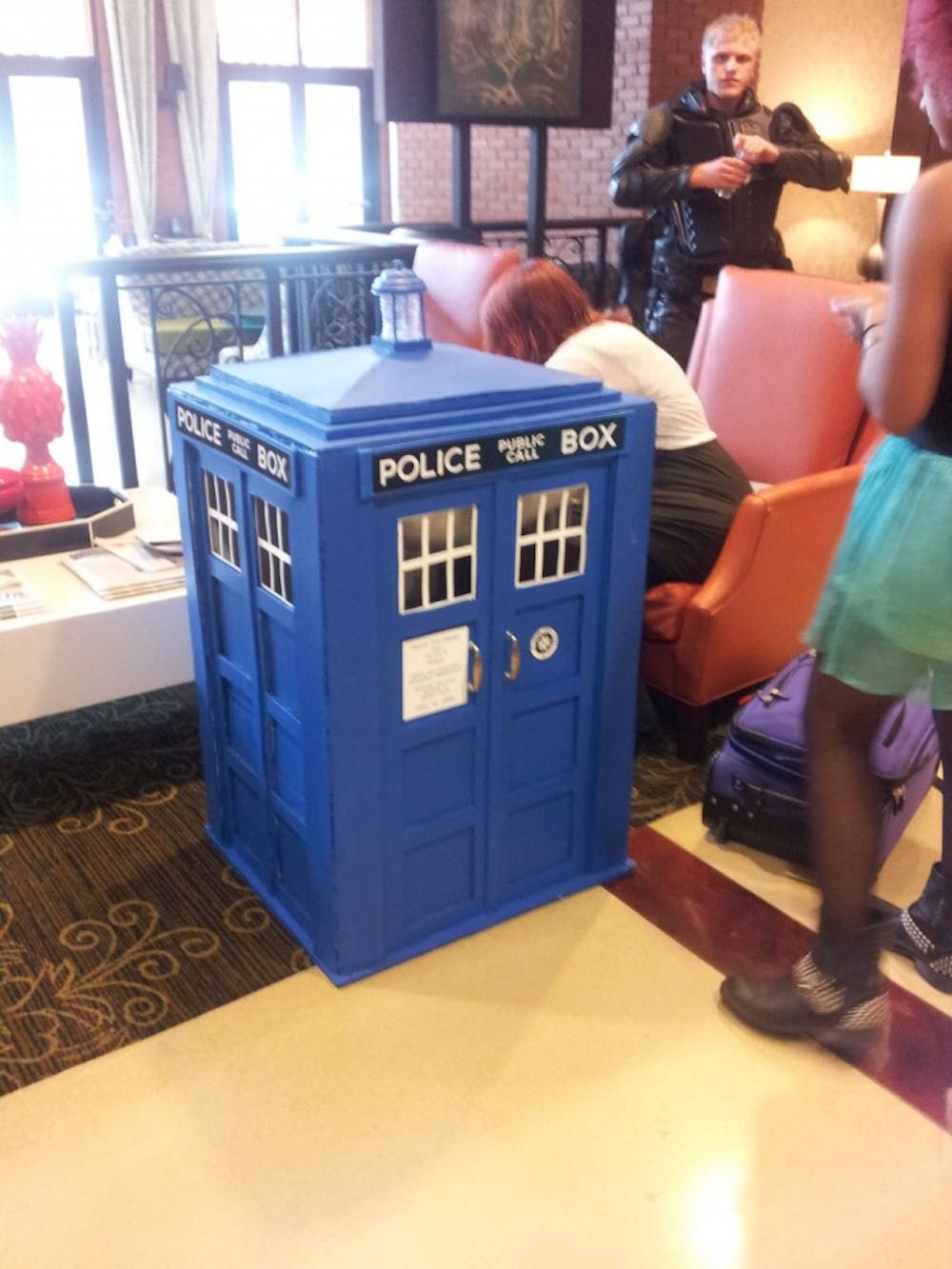 At Comic-Con, a loyal "Doctor Who" fan built a giant Tardis — and wore it. Photo by Rebecca Iannucci, editor-in-chief.

To anyone that knows me well, one thing is clear: I’m a planner. I like to-do lists and spreadsheets, and without the “Stickies” app on my computer, I would essentially be lost in life. In fact, when my hard drive crashed earlier this summer, I lost every one of my virtual Post-It notes and had to — gasp — recall things from memory. It was awful.

But the point is, I like knowing where things are headed. It makes me feel better to have a plan. And when I was 10 years old, I stumbled upon a life plan that I wouldn’t change for many years: to become a journalist writing for Entertainment Weekly.

I was raised in a household surrounded by pop culture. My sister and I practically grew up in front of the television, and we made a habit of asking our parents if we could stay up until the then-ungodly hour of 10:30 p.m. in order to watch things like the MTV Video Music Awards, or whatever late-night talk show ‘N Sync was performing on at the time. We went to the movies on countless weekends, attended as many concerts as we could and listened to the morning radio shows every day while we got ready for school. By high school, I could recite all the winners of “American Idol” as easily as I could recite the Pledge of Allegiance. Award shows like the Emmys and Oscars were big events in my house — they still are, as my roommates can attest. A life that wasn’t infused with movies, music and television simply wasn’t fun for me.

When I was in the fifth grade, my parents subscribed to Entertainment Weekly, and it quickly became my Bible. A magazine that combined clever, poignant journalism with the world of pop culture? Sign me up. This would become the magazine that taught me how to write a proper movie review, how to be critical, how to tell compelling stories. I’d been interested in journalism since I was young, but this magazine would shape who I was and what I wanted to do with my life.

[quote]As an editor-in-chief who is more passionate about 'Breaking Bad' than I am Edward Snowden, I struggle with self-doubt.[/quote]

This past spring, the internship program at Entertainment Weekly turned me down.

I wasn’t expecting to be so disappointed. After all, three years as a journalism major have taught me that rejection is just part of the game. But I couldn’t help feeling that an internship at EW would have been the ultimate success, a milestone that I’d been waiting 10 years to achieve. My heart sank at the words, “we are regretfully unable to offer you a spot this summer.” Suddenly, my ever-dependable life plan was laughing in my face.

But that’s when something great happened.

It was a combination of serendipity and a fateful phone call from my sister that set me on the path to interning at TVLine, a television-centric website that provides news, episode recaps, spoilers and fun features about all of today’s TV shows (except for anything that involves Real Housewives or any of the 17 Kardashians, which is truly a blessing). Funnily enough, the site was created a few years ago by a former writer for TV Guide and — you guessed it — Entertainment Weekly. In fact, two of the six writers who make up the site’s small editorial team are former EW writers that I’ve been reading since I was 15. When I was fortunate enough to land this internship, I thought, “It’s not Entertainment Weekly, but it’s probably the next best thing.”

I was wrong. It wasn’t the next best thing — it was the best thing.

[quote]For most of the weekend, I couldn’t believe I was actually there, shaking hands with actor upon actor: Zachary Levi! Jason Segel! (Even Kevin Bacon, which puts me just one degree away from him.)[/quote]

At TVLine, I’ve gotten to experience events that I’ve only dreamed of until this summer. Just days into my internship, I was asked to cover the red carpet premiere of “Orange Is the New Black,” a new show on Netflix that debuted in July. I’ve gotten to write about television shows that I’ve watched for years, transcribe interviews with Emmy-nominated actors and — the creme de la creme — I was invited to attend San Diego Comic-Con for five days last month. It’s one of the biggest events of the entertainment year, and there I was, on a cross-country flight by myself just two weeks ago.

Comic-Con was, in a word, insane. Each year, TVLine sets up an on-camera interview suite on the bottom floor of a hotel, and for 10 hours a day for three straight days, the site invites cast members, producers and writers from countless TV shows to drop by the suite for brief interviews. My job was to greet the talent as they came through the hotel lobby, take them downstairs and make sure they were comfortable in the green room while they waited to be interviewed.

For most of the weekend, I couldn’t believe I was actually there, shaking hands with actor upon actor: Zachary Levi! Jason Segel! (Even Kevin Bacon, which puts me just one degree away from him.) It was a blur of a weekend in the most amazing way, and I never could have guessed I’d spend part of my summer in California, doing what I love most.

Sometimes — though I hate admitting it — it’s a bit intimidating to be a student in Elon’s School of Communications, aspiring to write about entertainment when so many of my peers are covering politics and all kinds of hard news. We’ve had cover stories in The Pendulum that discuss sexual assault on college campuses, marriage equality, student government and the dangers of studying abroad. As an editor-in-chief who is more passionate about “Breaking Bad” than I am Edward Snowden, I struggle with self-doubt: Will people ever take me seriously as an editor when my life’s ambition is to write about pop culture? What if they don’t think I’m good enough, or respectable enough?

Throughout this summer, I’ve been able to chip away at those fears. I’ve learned, in just a few short weeks, that it isn’t about pleasing other people or making yourself into something you’re not. Follow your passion, and a feeling of fulfillment won’t be far behind — at least, I hope that’s what continues to happen.

And, more than that, I’ve learned that it isn't always about having a plan. Since my college career began, I’d had an overarching goal to obtain one specific, elusive internship — and I didn’t. But I ended up with something so rewarding instead. I learned from my idols this summer, traveled across the country, compiled a healthy portfolio and made invaluable connections. I have no idea what awaits me in post-grad life — which is, frighteningly, just 10 months away — but I have no doubt that life’s surprises will be the most exciting part.

In fact, I’m planning on it.