Chick-fil-A To Remain At Elon 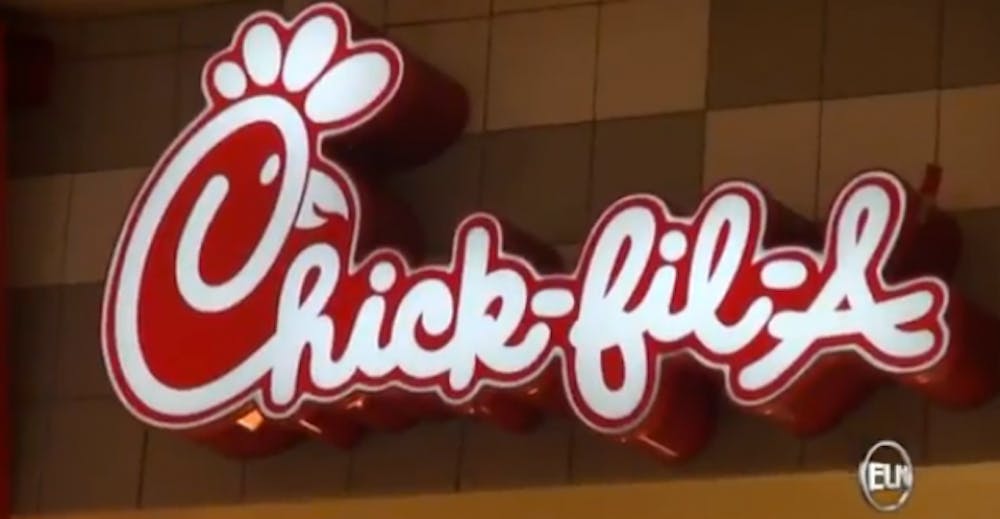 After months of deliberation, the Board of Trustees has elected for Chick-fil-A to remain on campus after reviewing a report submitted by the Vendor Policy Committee.

The committee was formed in November 2012, after controversy arose over Chick-fil-A's presence in Octagon Cafe in the Moseley Center.

The original petition to remove the restaurant from campus was filed by Spectrum, an LGBTQ advocacy group, after Chick-fil-A President and COO Dan Cathy made controversial statements regarding same-sex marriage in June 2012 on a Christian talk show.

"Well, guilty as charged," Cathy said, when asked about his opposition to same-sex marriage. "We are very much supportive of the family -- the biblical definition of the family unit. We are a family-owned business, a family-led business, and we are married to our first wives. We give God thanks for that...we know that it might not be popular with everyone, but thank the Lord, we live in a country where we can share our values and operate on biblical principles."

According to a report by Equality Matters, a LGBTQ equality initiative, Chick-fil-A donated money to anti-gay groups in 2009 and 2010, including the Marriage and Family Organization, Exodus International and the Family Research Council. According to the Committee report, Cathy confirmed these donations in an interview and a receipt of IRS Form 990s to support these findings.

Spectrum says that Chick-fil-A's actions and Cathy's comments do not align with Elon University's values regarding tolerance and diversity.

"I do not eat at Chick-fil-A and would never support them," said First Year student Holly Brown, a member of Spectrum. "No matter how many positive groups [Cathy] chooses to donate to, the fact that he donates to people that support conversion camps feels like a personal attack on myself and the rest of the LGBTQIA community."

"The fact that Elon condones [Chick-fil-A] both surprises and upsets me," Brown said. "You would think preventing discrimination would be more important than a chicken sandwich."

"The university has a fiscal relationship with Aramark and not Chick-fil-A," the Committee report states. "The employees serving Chick-fil-A food items at Elon are Aramark employees who are protected by that company's non-discrimination policy, which is similar to Elon's."

"No money is exchanged between the university and Chick-fil-A," the report states. "Therefore, we find Chick-fil-A operations on campus do not violate our non-discrimination policy."

The Committee received 495 emails during the course of their deliberations, including 317 emails from members the Elon community.

A joint-statement from President Leo Lambert, SGA Executive President Welsford Bishopric and members of the Vendor Policy Committee released this morning states: "Today's communication from the Board of Trustees calls upon our community to further commit ourselves to building a campus climate of respectful and meaningful civic dialogue.

In October the Student Government Association Senate passed a resolution taking a stance against Chick-fil-A on campus with a vote of 35-11. This resolution was vetoed by then-SGA Executive President Darien Flowers.

Flowers released this statement on today's news: "I am encouraged by the decision of the Board. It is always a nice feeling as a former student leader to have the highest authority at your university agree with a policy position you have taken. This experience has taught me a lot about standing behind your convictions and not being swayed by what is popular at the moment. This outcome is the correct one for Elon and higher education broadly."

Chick-fil-A will move from its current location in Octagon Cafe to the first floor of McEwen Dining Hall next fall, as Octagon Cafe undergoes remodeling.

Stay posted to Elon Local News and follow @ElonLocalNews on Twitter for more as the story develops.