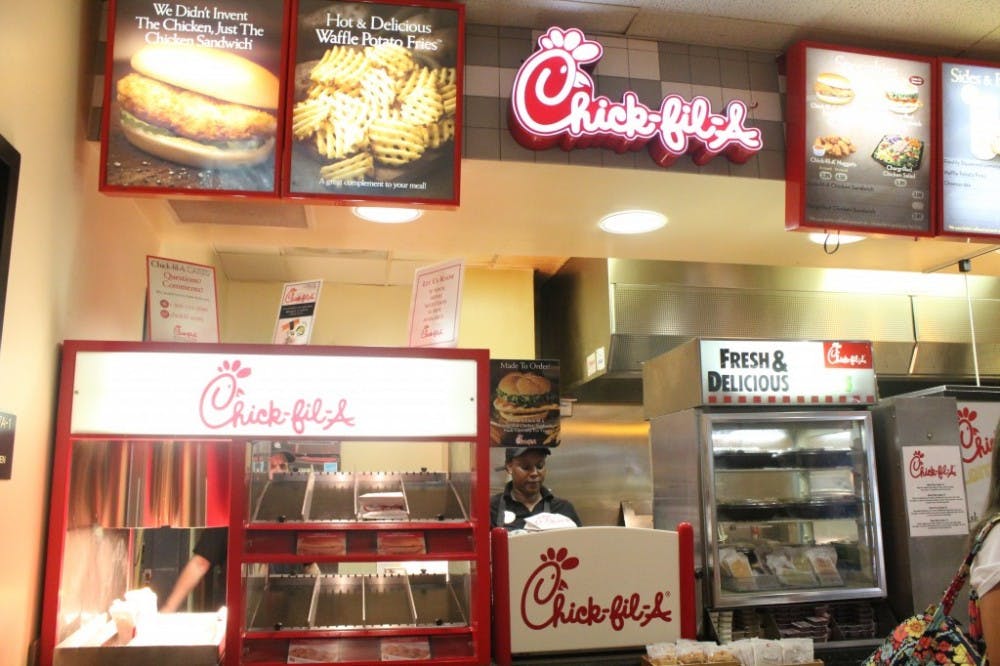 After several months of controversy, Chick-fil-A will remain on Elon's campus.

After considering the findings and recommendations of the Vendor Policy Study Committee, Elon University’s Board of Trustees voted to continue the university’s partnership with Chick-fil-A. The restaurant, currently open in Octagon Café, will relocate to the first floor of McEwen dining hall by early fall.

After much deliberation, the Board of Trustees determined there was “no actionable cause to remove Chick-fil-A from campus," according to a statement by the Board.

"The Board is reluctant to put the University in a position of monitoring or making value judgments about the lawful philanthropic giving of vendors or related organizations, board members, alumni, faculty and staff, students, or friends," the statement said. "Removing Chick-fil-A solely on the basis of the owners' stated views or their lawful philanthropic choices would stand in opposition to Elon’s mission statement, which encourages freedom of thought and liberty of conscience."

The Vendor Policy Study Committee was appointed in October 2012 to review Elon’s vendor and purchasing policies following a campus-wide debate regarding Chick-fil-A’s presence on campus. Spectrum, Elon’s queer-straight alliance, argued the franchise’s donations to anti-gay organizations opposed the university’s commitment to fostering a diverse campus environment, while other students insisted the franchise did not discriminate against anyone.

Emily Kane, an advocacy and education chair for Spectrum, said she was disappointed in the Board's decision.

"I was pretty optimistic," she said. "I figured they would have taken into considering everything we were saying about the discrimination we felt because of Chick-fil-A's presence on campus, and I think it’s pretty awful they decided to keep it when a group of students is clearly feeling pain over it. The decision may deter LGBTQ studetns from coming to campus because it sends a visual message. This was a decision they made. This was not passive action."

"I’m encouraged by the decision,” Flowers said. “It is always encouraging when the highest authority stands behind a decision you made. My words came across to the people who are the ultimate authority. This decision is not a position on the issue, but rather an agreement that Chick-fil-A has not done anything egregious to warrant its removal from campus.”

Chick-fil-A’s presence at Elon became a divisive issue in September 2012 when Spectrum drafted legislation calling for the franchise’s removal. Spectrum did not take issue with COO Dan Cathy’s support for “the biblical definition of a family unit,” but rather the franchise’s donations to organizations such as the Family Research Countil and Exodus International through WinShape, its charitable arm. The SGA first voted on the legislation Oct. 12.

“These groups cause direct harm to LGBTQ people and contribute to an environment that is unhealthy, discriminatory, hostile and offensive to the entire LGBTQ community,” said senior Lauren Clapp, an advocacy and education chair for Spectrum, during an SGA open forum prior to the vote. “Exodus International is an advocate of conversion therapy, despite the fact that is has been denounced by at least 15 reputable medical societies.”

The legislation against Chick-fil-A passed in the SGA Senate that night in a 35-11 vote, but senior Darien Flowers, then SGA Executive President, vetoed the bill Oct. 21.

“We are here to permit the free flowing exchange of ideas,” Flowers said in a statement. “If we ask the administration to remove an institution because of its ideas, we are setting a precedent that is dangerous because it stops the free flow of ideas.”

The SGA Senate voted 21-20 to uphold Flowers’ veto Oct. 24, following a day of protests on campus. Several students organized “Chick-fil-A Appreciation Day” to show support for the veto, while other students gathered to oppose those who patronized the restaurant.

“There are people who have been saying, ‘I don’t have any problem with the LGBTQ community, I just really like this chicken sandwich,’” said Kirsten Ringelberg, the LGBTQ office coordinator and associate professor of art history, on the day of the protests. “I think if you can say that when you know how much our students, faculty and staff have been hurt by the symbolic representation of Chick-fil-A on campus, then it is not entirely honest to say that you care about us.”

The university recognized the tensions caused by Chick-fil-A announced its intention to appoint a 15-member Vendor Policy Study Committee to investigate the issue and recommend an appropriate course of actions to Elon’s Board of Trustees.

““This doesn’t mean we’re going to start running every business relationship by this committee,” said President Leo Lambert at the time of the announcement. “The university already has several processes or screens in place to ensure we behave as a responsible enterprise, but there are exceptional times when someone says ‘I’m concerned about this,’ and there needs to be a process by which that concern would be evaluated.”

As the committee began to form, Spectrum redrafted and resubmitted legislation to the SGA as a resolution, rather than a bill. A bill encourages a specific course of action, while a resolution is an affirmation of a belief or sentiment, according to SGA Executive Vice President Connor O’Donnell. The revised resolution asserted Chick-fil-A had become a “symbol on Elon’s campus of intolerance and discrimination towards members of the LGBTQIA community” and opposed the continuation of Elon’s relationship with the franchise.

““The core of the legislation is still there,” Kane said at the time of the proposal. “We still want Chick-fil-A off campus, but the way we are going about it is no longer the financial argument, but rather the climate that has been created because of this controversy.”

The revised legislation passed in a 30-8-2 vote Nov. 30, signaling a win for Spectrum and others after nearly two months of controversy. However, the Board of Trustees was ultimately assigned to make the final decision.

In the wake of the announcement, Flowers encouraged the student body to move forward together.

"The community needs to come together to move into the next 125 years of Elon," he said. "We’ve had good days and bad days, hopefully more good ones and bad ones. We need to put this behind us and stick together"