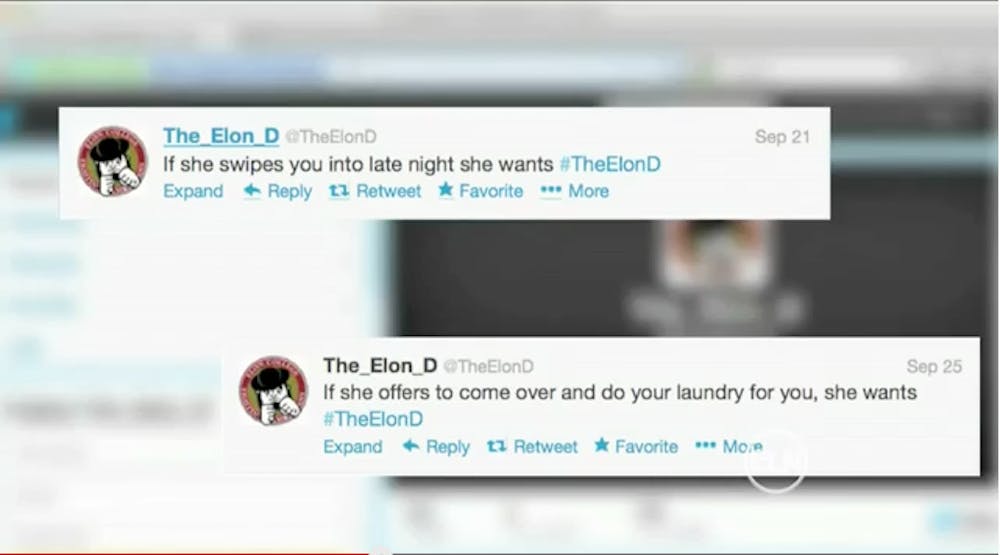 Twitter Parody accounts are nothing new. There are hundreds of thousands of them online mimicking people, places and even household objects.

There are more than a dozen parody accounts associated with Elon. They have names like "The Poor of Elon," "Elon Crushes" and even an "Elon Confessions" account.

But one of these accounts "The Elon D" is now under administrative review for its sexual content and for using the word "rape" in tweets.

The tweet was sent out after Elon's baseball team defeated North Carolina State's team. It implied that Elon had beaten NC State so badly that it might be considered "rape."

"People are just shrugging this off, because they don't see the underlying problems," said sophomore Delaney McHugo. "This is actually our cultures problem, that we do not treat sexual assault as serious as we should."

Neither girl wanted to see the creator of "the Elon D" punished. They said they'd prefer an open forum to discuss this kind of behavior. Erica Young said she would "really like to see students being held accountable."

The owner of "The Elon D" account wished to remain anonymous, but they sent a message stating:

"Obviously rape is no joking matter but it was meant to be a joke and people took it way too serious. Outside debate broke out not involving the twitter account which have blown it even further out of proportion."

Smith Jackson was unable to talk at the time of this story's airing. Stay tuned for more information about the administrative involvement.