A child’s escape from Nazi Germany: Henry Landsberger grew out of his misfortune 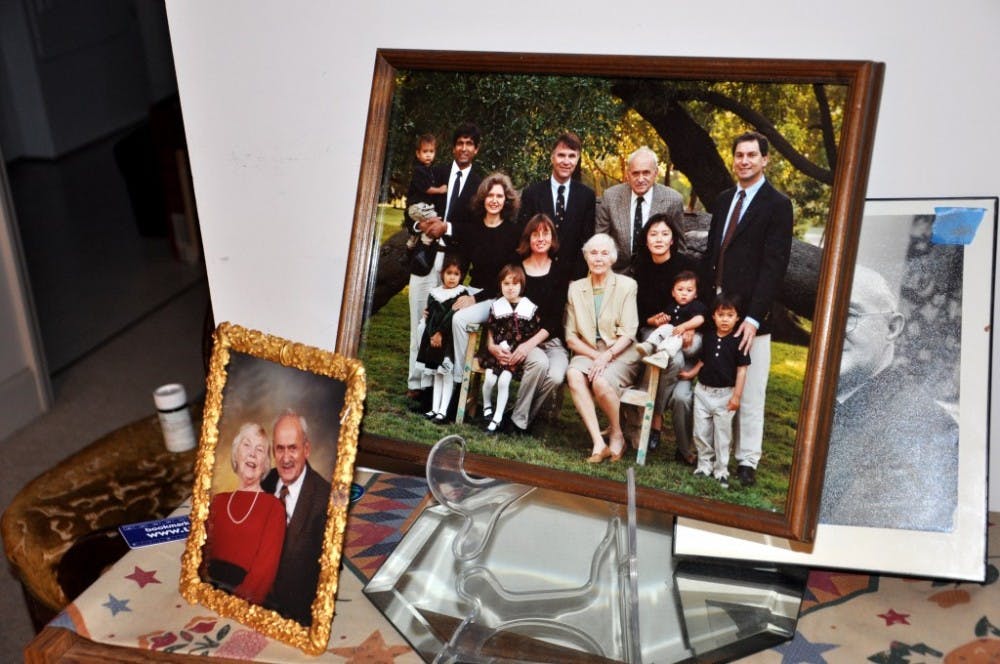 The framed photo features Landsberger, his wife Betty and their family, including their three children. Photo by Melissa Kansky, news editor.

It was evident by the way three men responded to the passing Storm Troopers with an outstretched arm; by the way Landsberger’s teammates harassed him following a soccer game; by the way his father fell silent after surviving a month in Buchenwald; by the way Germany slowly disappeared from view as he headed toward London, a passenger on the Kindertransport.

“I don’t think I had any regrets about leaving because I was so aware of the terrible situation,” Landsberger, 86, said. “While I was not enthusiastic about breaking with my family, I think I accepted it as a rational thing to do.”

A photo of Dresden, his first home, occupies a space on his living room wall. The white frame traps a picturesque city, omitting the scars adopted during the war.

Landsberger first witnessed the changing atmosphere when his uncle, chairman of the Dresden Association of Social Democratic Doctors, fled to Czechoslovakia overnight.

“That was the first real incident I remember, but I was just about immediately aware when Hitler won the election and assumed office at the end of January,” he said.

Isolation quickly followed. During the spring of 1938, after poorly playing goal-keeper, his high school teammates beat him in the locker room. Approximately 60 years after the incident, Landsberger returned to Dresden for a reunion with some of these classmates. The majority of them attributed the beating to his poor soccer skills, but one individual, Hans Lucke, confessed. He admitted the group harassed Landsberger because he was Jewish.

Nevertheless, in spite of the past conflict, Landsberger established a friendship with Lucke and excused the actions of the other boys.

“Had I felt hostile, I wouldn’t have met with them,” he said. “I figured they were kids and had gone through suffering themselves. I didn’t have hard feelings.” He interpreted their earlier aggression as a product of their environment. “Perhaps there was an element of scientific sociological interest in being close to these guys and seeing what happened to them and precisely noting they no longer had any hostility that they might have had,” he said.

Although he rationalized their actions at the reunion, in 1938, the incident was followed by exclusion from public school and advancing brutality.

That fall, Landsberger witnessed the devastation characteristic of Kristallnacht, the night the Third Reich sanctioned the destruction of Jewish businesses and synagogues. The next day, Jewish males in Dresden began to be arrested from their homes.

Landsberger’s father, a decorated war veteran, was dragged away to Buchenwald.

He returned Dec. 8, one month later, molded by the cruelty of the labor camp. “He came home a really broken man,” Landsberger said.

“One realized that in some, yet unknowing way, these hostile steps were going to progress.”

Despite the worsening conditions, his father remained a patriotic German.

“This slow progression was precisely what never provided quite enough impetus to get out,” he said.

But his mother found concern in her husband’s silence. While one of her sons obtained a visa to Chile, she insisted her 12-year-old son, Henry Landsberger, join the Jewish children on the Kindertransport to London.

But hardships awaited him on the European island as well.

“When we got to this camp, which had been built for summer use and had thin walls, I don’t think we were widely enthusiastic, but you just accepted it,” Landsberger said.

Across the battle lines

His escape from Germany causes him to caution his audience that he is not a “real” Holocaust survivor.

“To be a survivor is to be someone who escaped or left prewar Europe,” said Sharon Halperin, an organizer at the Chapel Hill- Durham Holocaust Speakers Bureau, where Landsberger donates his time to talk to groups about his experiences during the war.

Although some categorize survivors according to experiences during the war, the situation in Europe intensified prior to 1939, Halperin said.

“So I call him a survivor because of what he went through in Europe before he came to the United States,” she said.

While Halperin said people more frequently request to hear from one of the other 15 Holocaust Speaker Bureau participants because “they want to replicate the stories of Anne Frank and Eli Wiesel in their classrooms,” she recognized the importance of Landsberger’s testimony.

Even though he fled Germany, his arrival in London did not shield him from the effects of World War II. While living in a holiday camp in Dovercourt, he experienced the fighting from the other side of the battle line.

He lived in the Jewish refugee camp in London and listened as the siren wailed the morning of Sept 3, 1939, indicating Hitler had refused to withdraw from Poland. He passed the following nights on a mattress in the cellar, listening as his home country dropped bombs over England.

Prior to his arrival in London he had idealized the British lifestyle, allowing his imagined portrait to feed his hope for a secure life.

“If you had asked if they had any crime in England, I have would have said no,” Landsberger said of his earlier perceptions of the country. “They were all gentlemen.”

But soon the war settled on London. And although Landsberger’s German nationality made him an official “enemy alien,” he volunteered for the war effort and served in England as a Bevin Boy, working in the coalmines as part of National Service during World War II.

But in spite of his contributions to the Allies, Landsberger remained a proud German and never denied his heritage.

“For one thing, you can never do that; there’s enough accent,” he said. “But I don’t have any desire to do that. I am who I am: a German, Jewish refugee who also became quite influenced by being in England.”

His newly formed relationships in England strongly impacted him and influenced his academic pursuits throughout his life. After more than a month of listening to the bombs rain outside the cellar, Landsberger received an invitation from his aunt to live with her in the home of Robin Jones in Lincoln.

He described his introduction to Jones as “the biggest piece of luck in his life.”

Robin helped the young boy enroll in the Lincoln City School and inspired him to study sociology.

“I really followed in Robin Jones’ footsteps,” he said.

Landsberger graduated First Class Honours from the London School of Economics with a major in sociology and continued his education at Cornell University in 1949, where he worked as a graduate assistant and earned a doctorate at the School of Industrial and Labor Relations.

He attributed his interest in societal issues and his academic pursuits to his experiences during the war.

His early consciousness of politics motivated him to study the relationship between government and social issues. Even later in life, his tendency toward politics has not wavered.

At 5 p.m. he interrupted conversation to “listen to the headlines.” He turned on the radio and placed it upright on the footstool along side his reclining chair.

He listened to the recent developments of the Voter ID bill and mention of a lawsuit against J.P. Morgan Chase.

When the report concluded he turned his attention back to the living room, where even still, his political aptitude serves as a fixture in his life.

“I must have thought: what can you do with this kind of knowledge except to teach it,” Landsberger said.

Landsberger became assistant director in the ILR School at Cornell, but was soon offered the opportunity to move to another corner of the world. He relocated to Chile, where his family lived after leaving Germany and where he spent some time after completing his schooling in London.

In Chile he served as a lecturer in Spanish on human relations in industry and industrial sociology and was named an honorary member of the University of Chile’s Faculty of Economics.

Teaching opportunities also brought him to the Latin American Studies Center in Zurich and the University of Manchester before he accepted a position in the sociology department at the University of North Carolina at Chapel Hill.

“I am associated with many places, but we came here in 1967, so we’re talking about 45 years down here,” said the retired professor, referring to the home he and his wife made in Carolina Meadows.

A painting of Big Ben and Parliament, framed against a white backdrop, faces Henry Landsberger’s chair in his Chapel Hill home. A photo of Dresden rests to the right, staring directly at the painting of Wales mounted on the opposite wall.

His house offers a collage of the cities he had called home, interminable glimpses into his travels.

“Without giving up that all these other places were my home, I consider ourselves settled in Chapel Hill,” he said of himself and his wife, who recently passed away.

A collection of black and white photographs cover the wall separating the kitchen and living room. His past and present live side by side.

They offer a trajectory of his life: his wedding to Betty Hatch, his travels and the growth of his three children.

His children live far away, two in Los Angeles and one in Alaska, but Halperin said the local community of Holocaust survivors reminds her of family. Talking with Landsberger is reminiscent of her time spent with her own parents who are survivors as well, she said.

“They’re gems. They’re treasures,” Halperin said of the survivors. “Other people can appreciate what they went through, and many of them are optimistic. Despite the fact that they went through so many things, they come to America and are thankful to be alive.”

Halperin also said she admires his decision to return to Germany. Aside from participating in the high school reunion, he returned to conduct research about East Berlin after the wall fell in 1989. He also returned to help reconstruct a synagogue in Germany.

While Halperin expressed great respect for her own parents, Landsberger’s willingness to return contrasts her parents’ refusal to set foot on the land from which they came.

“It’s fascinating that he was willing to go back and immerse himself in the community even though he was ripped from it,” she said. “He put a lot of effort into making the Jewish community alive there again.”

And he certainly enveloped himself in the community at Carolina Meadows as well. He cordially greeted the other residents as he walked to the dining hall in the main office and playfully chastised the host for giving away his favorite cushion.

Landsberger stopped to talk to acquaintances already seated, while his dinner companion, Barbara Rodbell, waited for him to choose a table, quietly confessing that if she picked one he would insist on another.

Rodbell, also a survivor who hid in Holland during the war, met Landsberger when he moved to Carolina Meadows 11 years ago.

Living in the present

Although they share a common history, present-day matters consume their conversation. Talk circles around the recently published books they are eager to read.

Even though his country segregated the young Landsberger from society, he has developed a life intrinsic with worldly affairs and established strong relationships. He unearthed opportunities buried in the earlier misfortunes.

“I’m really grateful that despite that background, which might have easily meant the end of my life, I in fact had a very good life,” he said. “While I contributed to it being so good, there is a lot of luck. Much is due to fortune.”