The Battle of a Lifetime 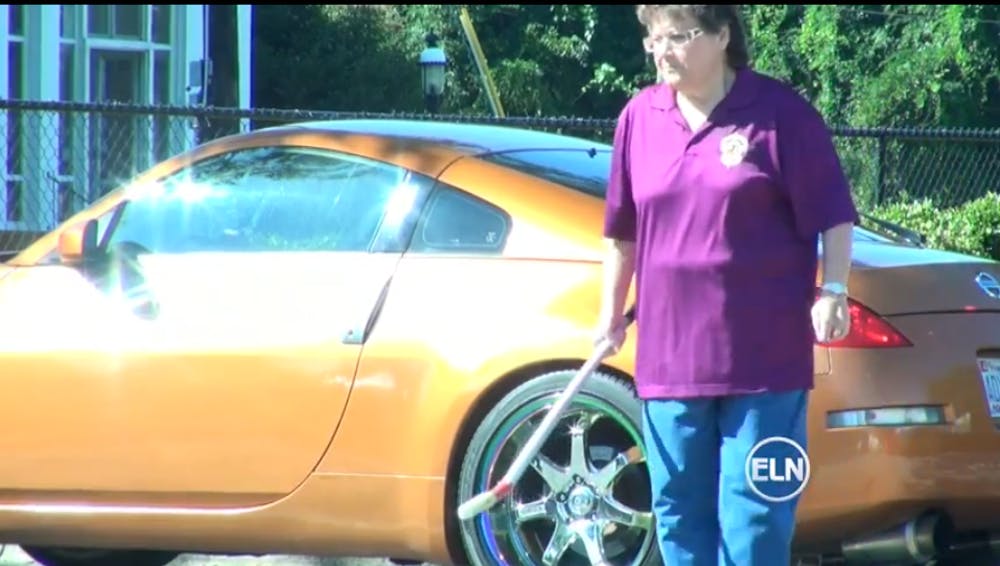 "When I came back for the job," Elon Town Police's Lake Blalock says, "I didn't realize how much the town had changed."

Blalock grew up close-by and attended Walter Williams High School in Burlington. After leaving the area for work, she came back years later.

"When I left it was still Elon College," Blalock recalls. "It was not Elon University."

For the past two years, Blalock has been working as the parking enforcer for the Elon Town Police. If there's a parking violation in Elon, Blalock finds it. Several times a day, she goes out, marks car tires with chalk, and comes back. If the same car is parked in one-hour parking for longer than that one hour, they receive a ticket. She also makes sure that no one is parked the wrong way, too close to a fire hydrant, in a handicapped spot when they shouldn't be, etc.

Many students know about as much about Blalock as they do the price of a one-hour parking ticket. Blalock, however, keeps busy when she's not at work doing her rounds.

"I'm a member of the Red Hat Society," Blalock explains. "It comes from a poem that says, 'When I get old, I'll wear purple and red and have tea with my friends.' Basically what it is...it's a social club. You dress up."

Blalock says the group is easy to spot.

"Whenever we go some place, we always cause a scene," Blalock says. "Because some of the hats and the clothes and things are just outrageous!"

Blalock is also part of the Ladies Auxiliary Fire Department in Haw River, NC. She and others support the firemen in various things and has been in that role for 21 years.

Blalock also enjoys a good book when she has free time. "A lot of times, I just read the simple murder mysteries that put you to sleep."

Between all that Blalock has seen and done in her lifetime, it's what happened to her a few years ago that has changed her life forever.

Blalock says she slid out of a mini-van that year and began having severe pain in her back. After talking with doctors from Duke Hospital, she found out that her left kidney was deformed and had to be removed.

"When they went in to remove it," Blalock says. "And the tests came back, it was positive."

Her bout with cancer did not require chemotherapy and Blalock thought that was the end of it. But a few years later, she started feeling symptoms again.

In 2008, she said she went through some chemotherapy but not a lot, and felt better shortly after. Once again, that didn't last too long.

"Then I started falling and was in pain in 2011," Blalock recalls. "I could no longer walk up and down town. I would fall. My leg would give way and it had come back."

Blalock says that she was in a wheelchair and also lost all of her hair. To make matters worse, she burnt her finger.

"It got infected and I lost my finger and I was really sick with that," Blalock says. "They had to stop chemo because you can't have that infection and have that surgery. So, the Wednesday before Thanksgiving, I was having my finger removed."

Blalock also lost a lot of weight and had to buy all new clothes.

"There's certain steps or stages of cancer and I was at the stage where I was like, 'Leave me alone. Don't bother me; I don't want talk to you. I don't want you to come by; don't phone me, don't drop by. Just leave me alone.'"

Blalock says she wasn't even able to go to Christmas last year. "I felt pretty sorry for myself."

Reflecting back, Blalock says her friends did the best they could to help.

"We had a lot of friends that brought a lot of meals...and cards. I probably have 300 cards in a box."

Today, Blalock's tumor has stopped growing. The tumor still exists but Blalock is able to walk and get around.

"I'm driving myself back and forth to work and where I want to go," Blalock says. "I can actually go to the grocery store and buy milk and bread. I don't have to send my husband."

Blalock says cancer is like having a bad case of Arthritis and the pain cannot be stopped by medication. Despite the pain, Blalock goes to work. Her doctor admires her courage.

"He says that the way I'm doing now is the best I can be but I'm better than anyone thought I would be. They figured that I'd probably be sitting in a chair drawing disability but I wouldn't give up!"

Blalock says her doctor can't believe that she's able to get up every day and go to work. Blalock has done so well that she is now on the e-mail list at Duke Hospital for other cancer patients.

"What they do is, someone from Duke, from the cancer center there, sends you an e-mail, from another cancer patient and you answer it," Blalock says. "You try to be a support and they look at where you've been and where you're at and they want you to tell this person who's back at the first steps, 'Alright, I was there too but now, I'm here.'"

Blalock has some trouble walking but she uses an Elon Town Police vehicle called the "GO-4" to help her do her rounds. Since the vehicle is low to the ground, Blalock is able to get in and out of it with ease.

As Blalock looks to the future, she has this advice for anyone that may be in a tough situation in his or her life. "Don't give up! Fight every day because life is too precious."

She suggests that people be patient with others because they may not know what's going on in another persons' life. As she announces her final piece of advice, she can't help but smile.

"Remember that from Lebanon to College is one-hour parking and if I'm out and about, I'm going write you a one hour ticket."

Blalock has fought cancer, on and off, for eight years but she still has a lot of fight left in her.

"I look at it as the devil. That is the devil and I've got to beat him and I'm going to give it all I got!"

With all that she's been through, you can still bet she'll be out tomorrow marking tires and going about business as usual.