Presidential debates hold weight for some, not others 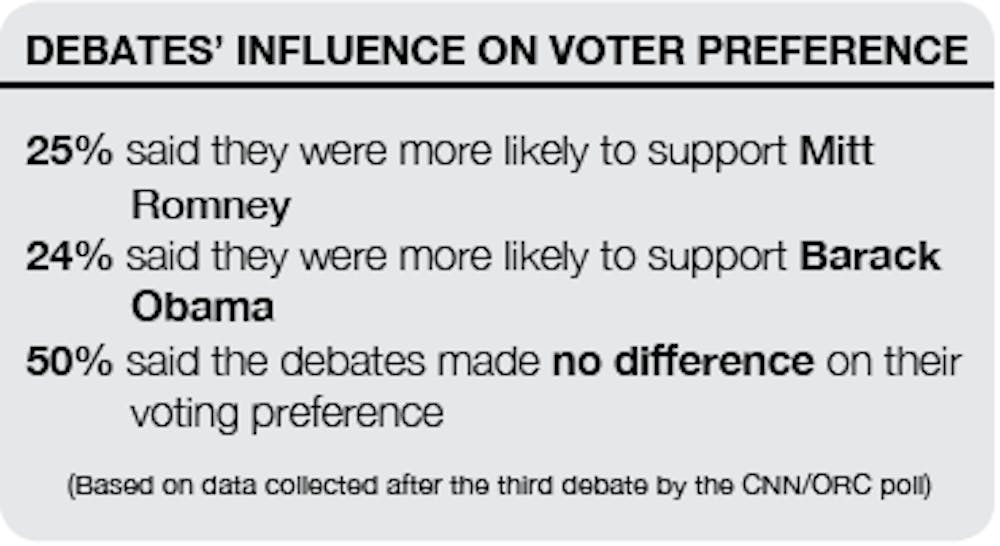 The three presidential debates have concluded, but voters question how accurate the televised events portray the candidates. Although public opinion polls and news organizations report a winner of each of the three debates, the extent to which the debates impact voter preference is minimal.

“I personally believe the debates are not a good representation of what their stance on the issue is because they have to give their opinions in a way that is going to appeal to all viewers,” said Elon University junior Katie Osborn.

A poll conducted by CNN/ORC nearly echoed the results of the NBC-Wall Street Journal poll. Of those questioned, 24 percent were more inclined to vote for Obama, 25 percent leaned toward Romney and 50 percent said they were not influenced.

Senior Genevieve D’Cruz identifies with the plurality of individuals whose views were not impacted by the debates. D’Cruz, who watched the first two presidential debates, expressed frustration with the lack of information provided during the political events.

“I wasn’t learning anything from listening to the debate,” she said. “I’m just hearing one candidate bash the other candidate.”

Osborn encouraged voters to turn to government websites and review the candidates’ voting records rather than trusting the debates. Online resources better illuminate their values, according to Osborn.

Google Analytics revealed the 2012 presidential debates have been followed by increases in searches of terms of interest for the two candidates.

“You need to make sure you’re doing the background research on what they voted for in the past and also what their stances are in real life,” Osborn said.

Nevertheless, some students appreciate how the debates reveal the personalities of the candidates and allow the candidates’ presentation to influence their voter preference.

Junior Lindsay Glosson, who identifies as an independent, said Romney appealed to her during the first two debates because he addressed her concerns about the last four years.

While she favored Romney following the first two debates, the candidate’s presentation during the third debate diminished her confidence in the Republican challenger.

“His inability to actually state facts or approach certain areas of the third debate with any form of confidence was a little unnerving,” she said.

Although the debates reduced her support for Romney, they have not solidified her vote for Obama either, she said.

The candidates conduct during the debates also impacted junior Amanda Lang’s views. Even though public opinion polls identified Obama as the winner of the last two debates, Lang said she sided more with Romney.

Sophomore Brogan Boles said she also gave weight to the presidential candidates’ behavior and delivery during the debates.

“That was important to me because it showed their leadership qualities and how they would go about leading a country,” Boles said.