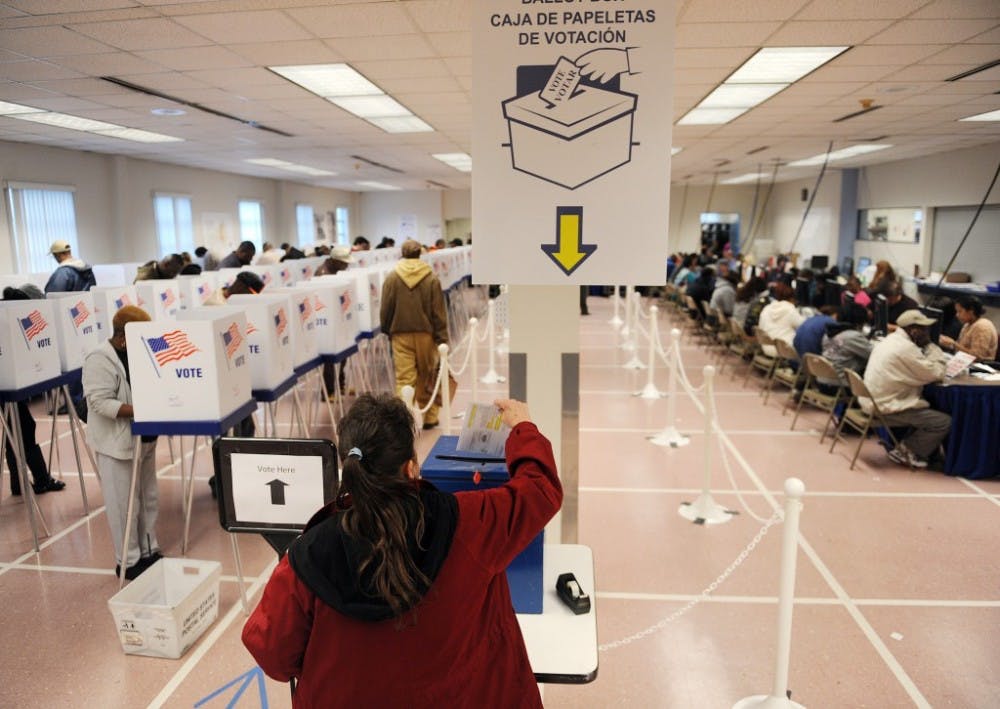 A voter drops her ballot into the ballot box during early voting in Cleveland, Ohio, Friday, October 26 2012. Ohio is among 34 states, plus the District of Columbia, where people can vote early. (Olivier Douliery/Abaca Press/MCT)

In nine days, the next president of the United States will be elected. If you’re like most students currently in college, this year will be the first time you are old enough to vote in a presidential election.

But just knowing the differences between Barack Obama and Mitt Romney isn’t going to cut it. It’s not enough to only know who you want your president to be: You need to read up on your local politicians, too.

It is those who campaign for mayor, county commissioner, house representative or senator who will impact your life most greatly. The policies they implement may affect whether your family qualifies for health insurance or what your annual property tax will be. They will decide the city council budget for the local public education system, uphold cleanliness statutes and regulate emergency service branches to ensure public safety.

Americans are affected by their local system of government most, but consistenly seem more interested by the actions of the federal level of government . And with so much emphasis placed this time of year on the campaigns for federal level offices, local and state elections are largely overlooked by American voters.

President Barack Obama and former Gov. Mitt Romney's stances on healthcare reform, tax incentives for the middle class or a possible war erupting in Iran or Libya have prompted citizens to cast their votes on Nov. 6.

But every election year, voters also have vital decisions to make at the local level, where they select mayors and city council members, state (and federal) representatives and senators.

Local politics matter. National politics matter too, but don’t make the mistake of dismissing your local election as unimportant or inconsequential. People often discount the significance of local and state elections when they come on the heels of a presidential campaign year. They see voting for president as the most vital step toward national progress.

According to the U.S. Census Bureau, an estimated 131.2 million people turned out to vote during the last presidential election, an increase of 5 million people from 2004 and the highest voter turnout since the 1960 election. These statistics certainly suggested the United States was perhaps witnessing a considerable shift in political behavior and was entering an era of more politically engaged citizens.

Sadly, these statistics, while an improvement for voter turnout on the national scale, are not typically reflected during local and state level elections.

Some would say comparing voter turnout rates between presidential elections and lower-level state and local campaigns is like comparing apples and oranges.

History has shown that presidential and gubernatorial elections consistently draw the highest levels of voter turnout because of their dominant news media and Internet presence.

But what many voters fail to consider is that while voting for a president is important, the majority of the laws and provisions that regulate our daily lives are decided not at the federal level, but at the local and state levels.

Issues that don’t directly affect the day-to-day lives of typical Americans — foreign policy issues, environmental regulations, national currency value, etc.— are what presidential candidates use to rally the country to garner support and demonstrate their understanding of issues of national and international significance.

Meanwhile, at the local level, in addition to choosing which candidates to endorse for public office, voters are often granted the opportunity to vote on proposed bills and ordinances that will affect their communities.

According to a 2012 sample ballot for Alamance County, voters have the option to vote on an increase to the sales and use tax rate and the proposed allocation of state funds to expand and improve Alamance Community College.

The issue now is figuring out how to level the playing field between federal, state and local campaigns and how to attract more interest toward lower-level elections. Elected officials and aspiring candidates must devote more energy to educating both registered and unregistered voters about the voting process and the issues at stake. Voters should feel whoever runs their local school board or determines their town’s annual budget is just as important as who is elected president. All elected positions are high-stakes and have considerable influences on our communities.

French philosopher Alexis de Tocqueville wrote, “In a democracy, the people get the government they deserve.” We all deserve a government that is comprised of those best qualified to represent our interests and determine our future.

But in order for us to deserve this privilege, anyone planning on punching the ballot on Nov. 6 has a responsibility to know the issues surrounding all the elections that stand to affect them, not just the issues concerning who the future president will be.

A functional government is not dependent upon the election of one man or woman, but many.