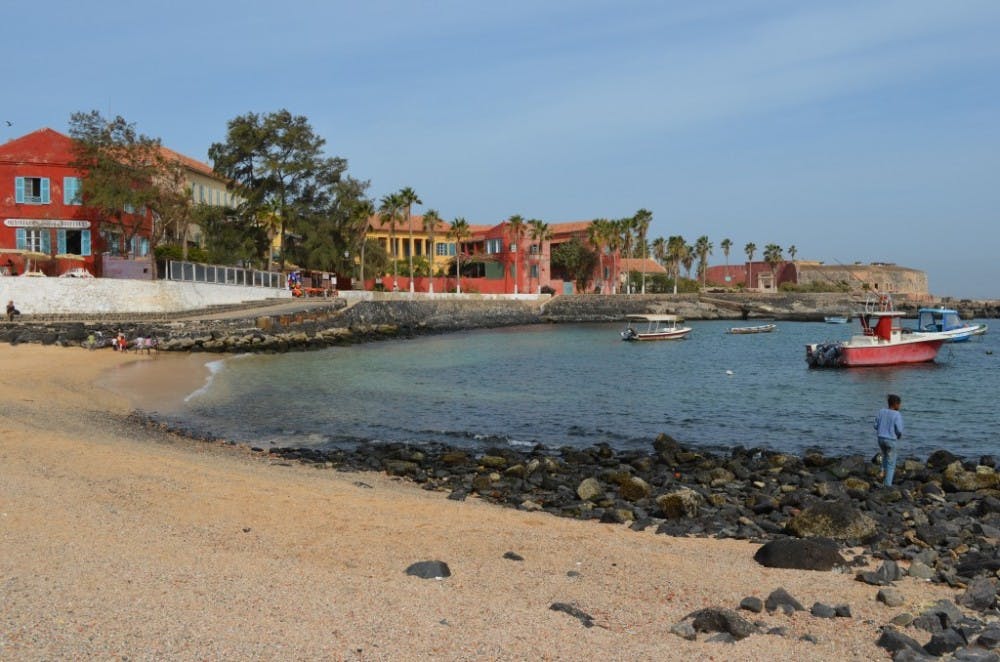 DAKAR, SENEGAL — Goree, a picturesque island just two kilometers from Dakar’s harbor, provided my first refreshing escape from the busy, dirty city of Dakar to a serene, beautiful island still dotted with colonial era buildings and cobblestone paths. The air is clearer, with a fresh Atlantic breeze coming off the ocean.

For the first time, I felt as though I could think and relax, far from honking taxis, roaring construction sites and the smell of garbage. Goree is absolute paradise. The only current negative I can conjure of the island is the aggressive vendors, who guilt-trip tourists into buying their cheap knick-knacks. But after escaping to the north end of the island, which faces directly towards the depths of the Atlantic Ocean, visitors can find peace staring into the waves and seek relief from the relentless heat courtesy of a steady breeze.

Unfortunately, the pleasures of Goree are matched with a sharp pang of guilt because of the island’s very dark history. Over the past few decades, the island has developed into a physical reminder of the Trans-Atlantic slave trade that dehumanized millions of Africans, tore tribes apart and terrorized much of Western Africa. Goree was a final stopping point for thousands of people before departing Africa to become slaves in the Americas. Its strategic location as the western most point in Africa, its close proximity to Dakar and its long history of affluent European settlement have made Goree a sought-after island by European powers since the 15th century.

The most famous landmark on the island, Maison des Eslaves, or the House of Slaves, has become a symbol of near mythological proportions as the final destination before slaves boarded ships in shackles. This story has been questioned in recent years, as some studies suggest the cavernous basement of the Maison des Eslaves may have simply been used for storing supplies instead of providing a dungeon for slaves. As a result, some of the emotional reaction is lost through personal skepticism. After all, I feel as though the stories the guides relate to the tour groups may be based more on legend than fact.

Despite this skepticism, Goree is still an important symbol for the slave trade. It is essential for everyone to have a location to reflect on the atrocities slavery inflicted on mankind, especially in this era where many caucasains would prefer to forget in order to be cleansed of responsibility.

It doesn’t matter if the number of slaves that passed through Goree was in the hundreds of thousands, or just one. The fact that European powers captured, shackled and sent millions of Africans to the Americas for forced labor is an act that must not be forgotten. Americans and people around the globe are often told “Never Forget” or “Never Again” in regards to the Holocaust and other modern genocides, but as a people, we often overlook what Americans and Europeans did to the native Africans between the 1500s and the 1900s. We must never forget what we did, and Goree is an important part of this continued education and remembrance. It is the symbol that Senegalese, Africans and the rest of mankind need in order to keep the legacy of slavery in our hearts and minds.

Similar to my other encounters in Senegal, Goree is a paradox of physical pristine beauty on an island with an ugly past. The most beautiful part of the day was the return ferry trip, where a school group of local Senegalese students broke into song for nearly 20 minutes. Their rhythmic beats, dancing and smiles throughout the ride were a powerful reminder that Africa is moving forward and not looking back. The entire continent has been ravaged by awful events that would shake the strongest of civilizations, but the people — particularly the youth —of Africa can only look forward to building a better future.