Community comes together for a cause 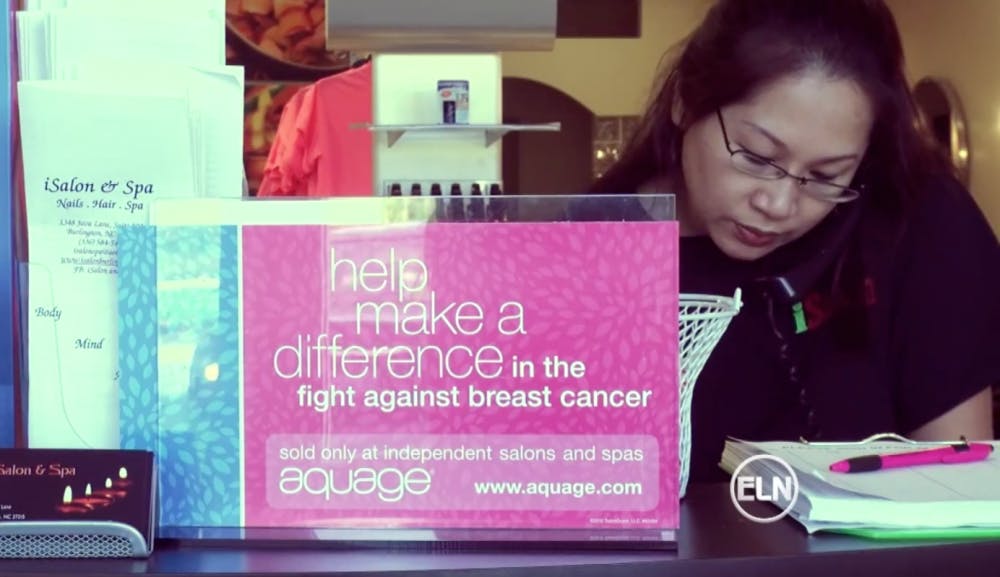 Pink ribbons, pink shirts and pink hair. October is breast cancer awareness month, and Elon community members are taking the opportunity to give back.

One local business that continues to do just that is iSalon. Manager Yvette Joyce is the manager of iSalon and has fund raised for years. This year, Joyce and iSalon will sell chili throughout October to raise money for breast cancer research.

"Texas Roadhouse restaurant is our big supporter," Joyce said. "So they donate chili, we sell it to raise money and we donate 100 percent. All the money we raise stays here in Alamance County."

Already, the chili has raised more than Joyce predicted, and the month isn't over yet. But chili isn't all iSalon is doing to raise awareness. iSalon is also selling raffle tickets for a chance to win a flat screen television or a pink Coach purse. The winners will be announced at a bake sale on Oct. 27.

iSalon isn't the only one honoring breast cancer this month. Elon University students are doing their part to bring awareness to the community. The Zeta Tau Alpha sorority is working all month to raise money for the Susan G. Komen Foundation. Their biggest event, Think Pink, starts Oct. 24.

Mia Brady is a member of the sorority and she says the fundraiser is a great way for students to support the cause.

"We sell the pink hair extensions, we all bake, there's a big yogurt eating contest," Brady said. "That's something we do all month. We collect the lids which go towards breast cancer awareness and education."

In addition to the tasty treats sold at the event, there will be a guest speaker and a performance by Rip_Chord and Sweet Signatures, two of Elon's a capella groups.

Currently, about one in eight women in the United States are diagnosed with breast cancer, and Sophomore Kaitlin Stober's knows the disease well. Stober's mother battled the breast cancer twice. She believes the term "breast cancer awareness" should apply to more than just raising money.

"Cures are great but until we get there I think it's important that we try and prevent and be educated about the subject," sStober said. "By making these functions bigger and better, the more attention it's going to get and the more live that can be saved"