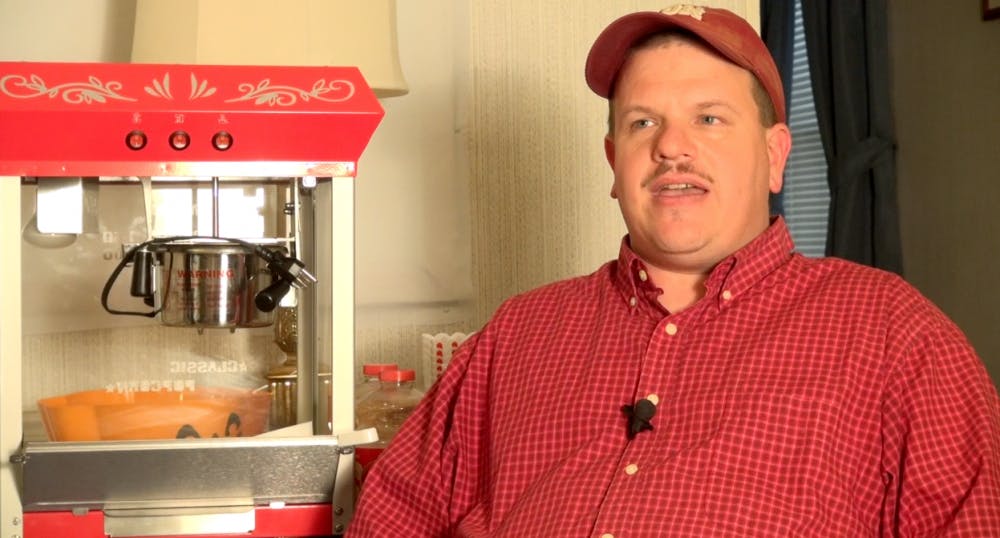 Perhaps the most popular employee in Elon's history, the man known simply as "Acorn Eddie", is now moving forward after his recent termination.

Aramark fired 7-year employee Eddie Talley on October 11th. When he was fired, he considered suing Aramark for discrimination and unlawful termination but has decided not to go that route.

"It gave me a kick in the teeth," Talley says from his mobile home in Elon.

Talley says one of the toughest parts was having his W-S-O-E radio show taken away from him, as he was no longer an employee.

"If I were to be able to continue with my 'Elon Dance Party', I feel like it would have become a popular show for WSOE," Talley says. "But the second show, off I go."

Since Talley's firing, he's heard some words of encouragement and stories about what used to be.

"The guy that works the door at West End told me that I was the talk of Homecoming weekend, about me getting fired. He told me that he didn't know who I was. And he says, 'I finally got to meet you after hearing about you.'"

Talley reflects about his time with Aramark, mostly at Acorn Coffee Shop.

"You don't want to always be business. You want a little bit of fun, a little bit of laughter, and that's what my fun was about working the cashiers at Acorn," Talley says. "It was all about making y'all smile when you had a bad day."

Above all else, it was the students, Talley says, who he admired and who made his job fun. Talley said he even had students approach him for advice.

"They're still supportive of me and they still want to see me around."

With that support, Talley began moving forward and was trying to think of a way he could stay in touch with Elon students. He decided he could sell popcorn somewhere in Elon. Talley bought a popcorn machine for $119.00 on eBay and gathered the rest of the supplies he would need.

"I thought I was going to have something before the town shot it in the butt."

Unfortunately, Talley was told that he couldn't sell the popcorn in the town of Elon because he did not have a permit. So, Talley is now doing what he can to move forward.

Talley is concerned about his unemployment checks because he does not know what lies ahead.

"I've still got my bills to pay the next couple of months," Talley says. "I don't know how I'm going to pay them."

For now, Talley says he has applied for jobs and has sent an application in to the Piedmont Triad Farmer's Market in Greensboro to hopefully sell popcorn.

Aside from the struggles of finding a job, Talley once again has his own radio show.

"I do a thing called the 'Route-66 Radio Show' and I play oldies music on there."

Talley broadcasts his show live on the Internet on Friday nights from 7-9pm. The link can be found on Eddie's Facebook page.

He may not have the job but Acorn Eddie still has the same positive attitude and the personality to go along with it. He'll do whatever he can to get a job but says he misses the Elon students who treated him so well throughout his time here.